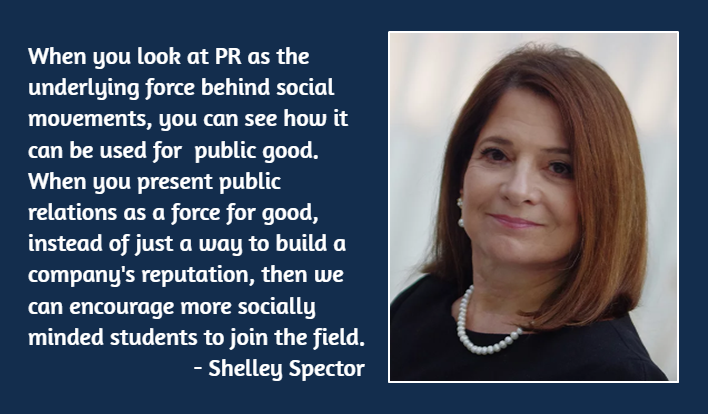 RT:  You run the Museum of Public Relations in New York city, which is very unique. What led to creating it?

SS: Yes, the Museum of Public Relations is unique.  In fact, it is the only museum in the world dedicated to PR history (although I have long wished that there’d be PR museums in other nations!).  What led to creating it?  It was Bernays, actually, who had the idea to create such a museum, and one day, at Bernays’s 101 birthday, he asked me and my husband, Barry, to create it. Of course, we had no idea to create a museum, but thought we could figure it out. Little did we know how complicated a job that would be, or how rewarding!  After Bernays died, in March 1995, his family invited us up to Bernays’s house in Cambridge, Mass. to choose the artifacts we wanted to showcase as our first exhibit at the museum.  Today those same artifacts– an oil portrait of Bernays, his inbox with original documents inside, many of his books, framed newspaper stories– are displayed at the museum in New York City.

RT: Tell us one of your most memorable moments with Edward Bernays?

SS: I’d say it was the very first dinner we had with Bernays, at the Waldorf in New York City, in October 1985.  Bernays was 94, but had all his wits about him.  It was mind-boggling to hear his stories; he seemed to have worked with every VIP of the 20th century.  And his recall for details was magnificent. He told us about working with Pres. Calvin Coolidge in the 1920s; how he came up with the Troches of Freedom campaign; the impact of his consumer products campaigns in changing American behavior; and the very important influence of his double-uncle, Sigmund Freud. Little did we know at that dinner that over the next ten years we’d be having dozens of dinners with Bernays.

RT:  How has Public Relations changed over the years, ever since you had started 40 years ago?

SS: When I first got into the field, we had no personal computers, email or Internet.  We wrote press releases on typewriters, mailed them through the post office and created media lists from printed directories, from Burrelle’s or Bacon’s.

We also spent much more time getting to know the media (eg. those famous three-martini lunches were a real thing!) and entertaining clients.  Since there was no such thing as social media, we depended a lot more on traditional media relations to get our clients known, so that means we had to be a lot more creative in coming up with campaigns: they had to be much more novel, and newsworthy, to get the attention of the press.

RT: You had said in an interview that you “love inspiring young people about using PR as a force for good in society”. How do you go about doing this?

SS: When you look at PR as the underlying force behind social movements, you can see how public relations can be used for the public good. This is as true in India as it has been in the US, during its social movements from the American Revolution, up through the anti-slavery movements, to women’s suffrage, and up through the Civil Rights era of the 1960s.  All these movements had to use public relations strategies to win the hearts and minds of the public in order to change society.  When you present public relations as a force for good — instead of just a way to sell products or build a company’s reputation — then we can encourage more socially minded students to join the field.

SS: I think it very much depends on the situation of the pandemic.  Here in the US, the virus has had a very negative impact on the PR business, especially, those in travel and hospitality, retail, and all non-necessities.  Plus Americas are consumed, rightly, with news of the economy, the elections and their health.  If we get back to “normal” – or closer to it – I think our field will come back bigger and better than ever.

Be the first to comment on "In Conversation with Shelley Spector"

How to handle a media interview