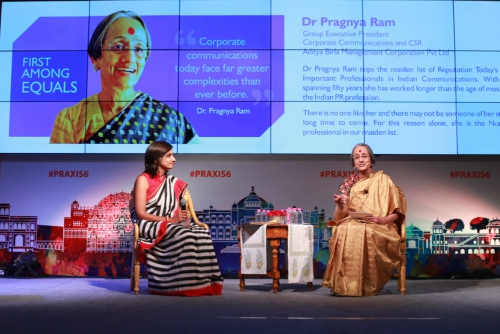 The Role of Communications in Building Communities was the topic for the inaugural session at PRAXIS, which had Dr Pragnya Ram, Group Executive President: Communications and CSR, Aditya Birla Group and Meena Vaidyanathan, niiti Consulting in conversation.

Building the ambience of a “fireside chat”, Meena first checked with Dr Ram about the prominent trends that she had observed, during her long stretch of almost a half-a-century experience in communications. Initially bringing up the topic of the youngsters today, Dr Ram said she is delighted to observe them, and that “it’s the intellect and value that matters”.

Having “stumbled” into Internal Communication by accident, she feels today that it was indeed destined for her. The changes through the evolving times, have been tremendous, though some things remain the same – values like integrity and authenticity. Competencies are important, she pointed out. If we are competent, it works. Another important point is “to keep learning afresh”, for “the day you stop learning, it’s like death”. She recalled when she entered the world of communication it was the wine-and-dine culture. At Birla’s they used to announce quarterly results, which were released to very important selected newspapers, which could be a daunting task. But, since she had a background of Masters in Journalism, she found herself in a rather fortunate position – most of the journalists were her professors!

Communications has evolved. “Today, what we see are tectonic technological shifts that have totally altered the way you reach out to media; and then, we have digital, at the click of a button,” she observed. It has its advantages and disadvantages. She had a term for it – “the tyranny of time”! As a result, communication has to be fast, monitoring of media must be consistently done. What she called the “reptilian culture”, and it’s only going to get worse!

With the shelf life of breaking news being 30 sec, so is there longer focus on content? You have to have something more, for content is extremely important. The trend of “experience creation” is what stays.

When Meena pointed out that there aren’t very many Indian global brands, and that no Ali Baba has emerged from India. True, Dr Ram was involved in taking the Aditya Birla brand to greater heights, but she confessed that her take was different. If you ask why a company exists, it’s because it supplies products. In the B2B space it’s difficult to make an impact like FMCG products. Take Aditya Birla – in whatever categories they are in, they are No1. “The persona of the group is trust and reliability. If you can build this among customers, it doesn’t matter. In India to build a global brand, you need to have a big idea and funds,” was her explanation.

When asked if there were any prediction on which brand will go global, she pointed out that there is disruption happening. “Look at Patanjali!” she exclaimed. But in matters of intellect, she was firm that India is right on top.

Having been a pioneer in the sustainability space, she admitted that she has seen many trends change. However, she pointed out that there are many companies who are into CSR, like the Kirloskars etc, who have been doing good. “What I see is that youngsters want to give back to society,” she said, which certainly is a fact that impressed her.

Any words of advice? “Today’s generation is far ahead. Honesty, integrity, values – if this is in place, you cannot go wrong. Do what your heart tells you, follow your passion”.

The process of learning never stops, and she is a living example. On surviving in the business, she noted that in PR you have to be authentic, apolitical, and have to always believed that if you are performing, the rewards will come automatically. She “earned my promotions, it came automatically”. Don’t hanker after fame, and don’t get lost in the corporate jungle.

Be the first to comment on "In Public Relations you have to be authentic, apolitical: Dr Pragnya Ram"

Return to office and the role of communication

Changing landscape of buzzwords and keywords