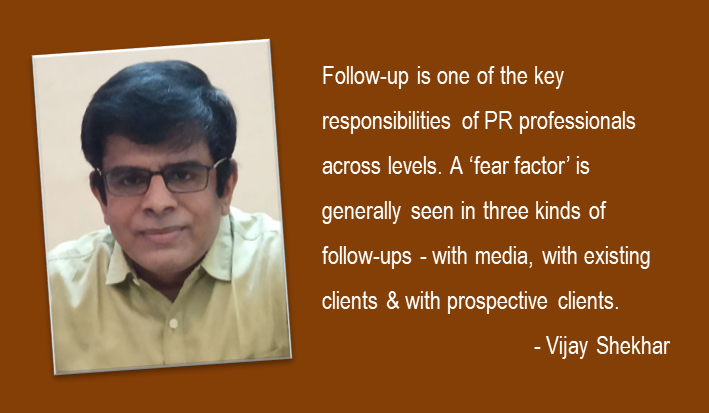 Follow-up is one of the key responsibilities of PR professionals across levels. And for PR professionals based in India, it’s an even more important function because people (including stakeholders for a PR firm) here generally have this habit of not responding if they are not interested in something and / or if they are busy with a lot to do. And most importantly, they are not bound to respond. Hence it becomes imperative to reiterate, reinforce and ‘sell’ our need to her / him…and this is what forms the crux of follow-ups.

Over the years I have observed that many a time, a ‘fear factor’ holds back consultancy representatives from following up on something on a regular basis. It’s the fear of being shouted at and / or being told a firm ‘NO’. Somewhere they find it difficult to accept a taunt and / or refusal as part of the profession we are in. And many a time, this mindset stops them from following up on anything consistently, however good and useful the proposition may be for the other party.

In a PR firm, this ‘fear factor’ is generally seen in three kinds of follow-ups…

An ad campaign for a particular brand can be a good one, average one or a bad one…and so can be a press release on the same brand. But irrespective of whether it’s good, average or bad, the ad will definitely make it to the media spaces that have been paid and reserved for it, unless of course there is some derogatory or immoral content in it. But it’s not so for a press release. Many a time a well-written and customised press release makes it to a good (Category A) media as a small snippet, or doesn’t make it at all. It’s simply because the editorial media is in no way bound to give coverage on press releases and pitches shared by PR consultancies. This somewhere becomes the ‘fear factor’ among consultancy professionals while pitching their press releases or stories.

It’s important to understand here that media persons also receive umpteen press releases, pitch notes and invitations on a regular basis. For them too it’s a matter of choice…of what to take and what not to. Many a time, out of a bunch of 500 ‘news items’, she / he has to pick just one or two. Theirs is also not an easy job…and on several occasions their frustrations come out in the form of rudeness on PR professionals who try to be as polite as possible (even if they don’t want to be so) on their follow-up calls.

If you ask me, media rudeness and attitudes should never be taken personally…this is something I have learnt over the years. We are doing our job…and they are doing theirs. Many a time when they are neck-deep into an important assignment and a PR professional calls, they just tend to get irritated. It’s somewhat similar to we receiving those irritating calls for credit cards, loans etc. when we are doing something very important, and we abruptly cut those calls…and many a time even block the numbers. Thankfully media persons haven’t taken to blocking PR professionals’ numbers.

At the end of the day, media persons are also human beings. PR professionals just need to be at it. They’ll be shouted at once, twice, thrice or even more times, but gradually that shouting media person will become a friend…simply because familiarity and ease of dealing develops gradually.

So LET THE FEAR GO.

In PR, there are initiatives and coverages that will happen…and there are things that won’t happen however much we try. It’s important to give a clear picture to the client. Many a time consultancy representatives fear to communicate non-possibilities to clients. This is generally out of fear of the client’s reaction OR the ultimate fear that the client will go. If a PR goal is achieved, well and good. But if it’s not achievable, it’s important to communicate a valid reason for non-achievement…just telling the client that something won’t work is not adequate. This is where many consultancy representatives fall short…they are unable to explain valid non-possibilities. Clients need to be shown where they stand, and advised on what they need to do or where they need to be to make something PRable. And if we can explain well, there’s no reason as to why a rational client won’t understand.

Another fear factor for consultancy representatives is following up with clients on outstanding invoices. This is because many a time client representatives are casually rude or bring up some PRable which wasn’t achieved (which may have no bearing with the consultancy remuneration). PR professionals need to understand that these are mere time-buying tactics of clients. They on the other hand, get into the fear mode and avoid following-up for payments to the extent possible.

Nowadays whenever I come across an executive who is hesitant to follow-up with clients for monies due, I ask her / him one simple question – “What will you do if your salary doesn’t come on time?” Answers range from “I will create a ruckus” to “I will push HR to credit it ASAP” to “I will take this up with the top management”. And then my heroic response is, “Exactly my point. The company has not got its ‘salary’ for the work we have done. So please create that ruckus, push the Accounts division at the client’s end to expedite payment, and if need be speak to their top management.” This somewhere hits the right chord.

So here too, we need to LET THE FEAR GO.

Assume that there’s a young boy (of marriageable age) who works in a good company, earns a good salary and personality-wise looks decent. He likes a girl working in the same organisation, whom he sees on every working day. He genuinely wants to marry her and spend the rest of his life with her. In office, they do smilingly say an occasional ‘Hi’ to each other, but nothing beyond that. He wants to convey his feelings to her, but has not been able to muster up enough courage to do so. He thinks to himself, “What if she says NO?”

My two-line message / advice to this boy would be…

NBD (New Business Development) prospects are also somewhat like the girl in the assumption above. To push their decisions in our favour, follow-ups are required on a regular basis. If we don’t follow-up or fear following-up with them anticipating rejection, other firms are waiting in line to follow-up relentlessly in order to bag an account.

Hence on NBD too, it’s imperative to LET THE FEAR GO. 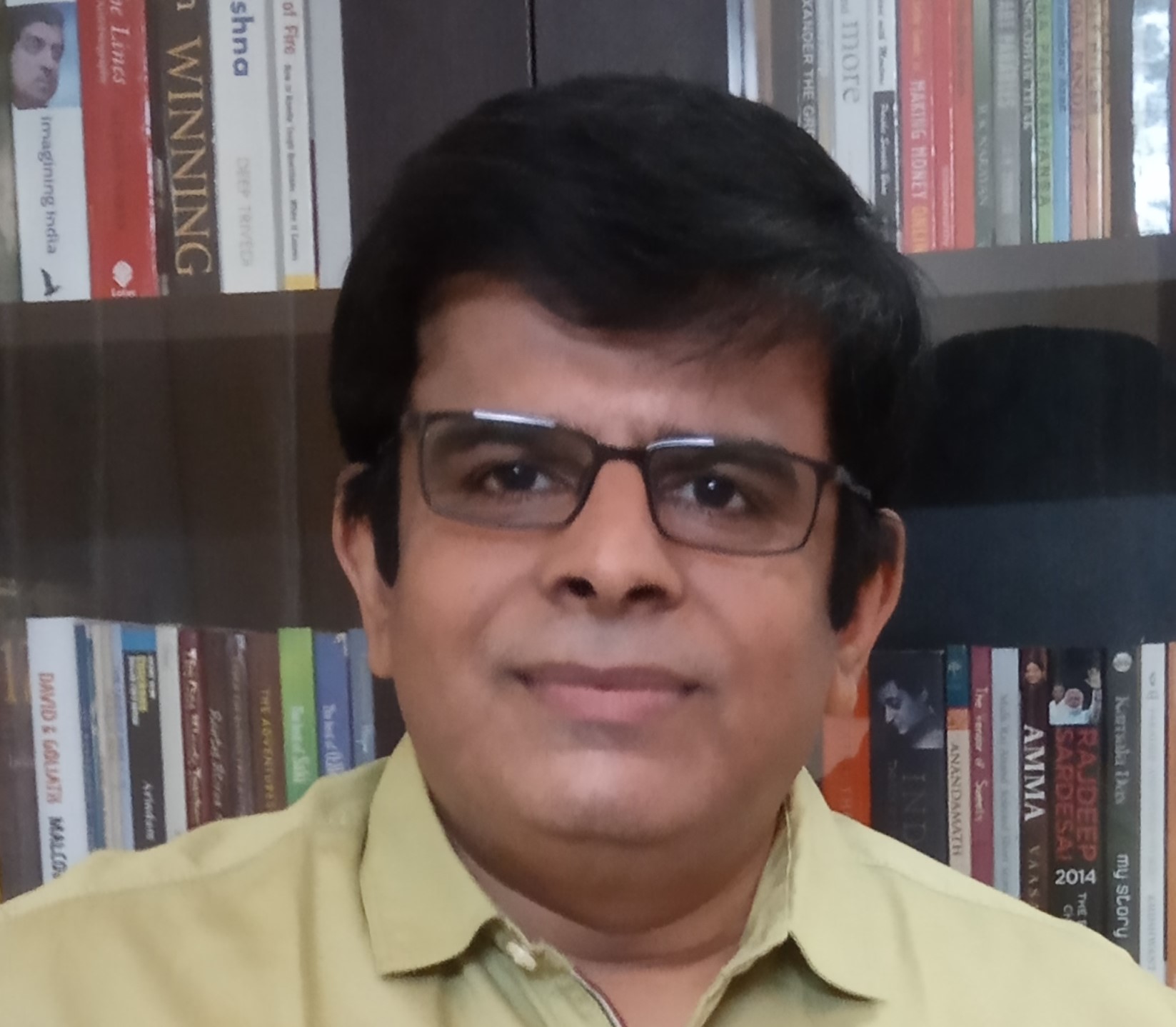 Challenge the status quo, with care. Be contrarian with a cause.

CSR is not PR