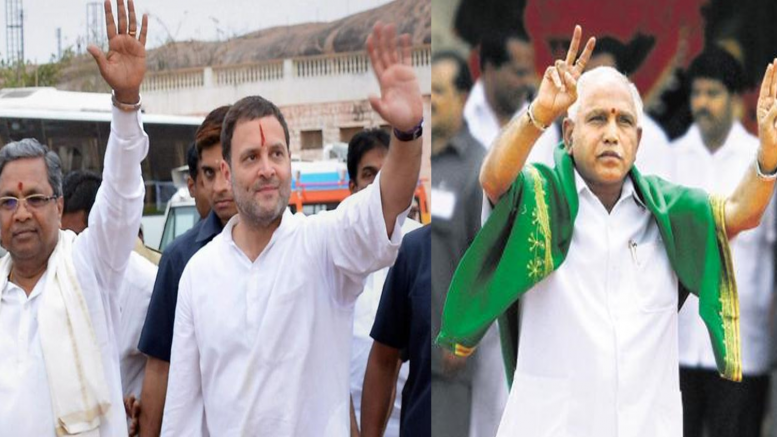 Even as the dust settles on one of the most eventful elections in India since the 2014 general elections, we are not quite sure which way to call the Karnataka Elections 2018 – what worked and didn’t. At the time of writing this post, the BJP, which emerged as the single largest party with 104 seats had been invited by the Governor of Karnataka to form the government the following day. At the same moment the coalition of INC and JD(S), which actually had a majority with 117 seats was on their way to the Supreme Court of India with a petition to stay the swearing in.

At the time of publishing this post, BJP’s Karnataka President and Former Karnataka Chief Minister BS Yeddyurappa was sworn into the CMO, and would have 15 days to prove his majority on the state.

This final outcome wasn’t as surprising as the haphazard journey to it was. We had previously discussed the issues that will matter on the basis of which it seemed to be anyone’s game. Both major contenders, BJP and INC had some crucial issues going for and against each of them, with JD(S) letting them scrap it out then in order to side with the highest bidder later.

In this post, with the benefit of hindsight, we look at a few things that worked (or didn’t),

Not long after Modi started with his 21 rallies, the Modi Wave was being credited with turning the mood of the elections. In my last column on State Craft, I spoke about the value of a Political Speech. BJP Karnataka was counting heavily on this wave because at that time they lagged in control of the narrative offline and were battered online, perhaps why they upped his target from earlier plan of 15 rallies. His rallies not only helped BJP harness the narrative in their favour but also re-invigorated some of the talking points on which they had not earlier capitalised. Sans him the BJP campaign just did not leverage anti-incumbency, corruption and minority appeasement by the Siddaramaiah’s government. His presence also ensured galvanisation of caste and religious groups in their favour.

I would like to give the people of Karnataka more credit than being a group that gets swayed by eloquent speeches and flashy roadshows. But the truth is this – Modi’s rallies sparked the inner discontentment with Congress government in most voters, who received the final nudge from Modi as if they were waiting for it.

This election, truly, isn’t over yet, and quite possibly in 15 days INC – JD(S) coalition may just go on to form the government, pencilling this as a loss for BJP. But irrespective of either outcome – the biggest loser in the election has been Rahul Gandhi. Not so much because of the number of seats lost by Congress in Karnataka elections which is a function of several factors and unfair to attribute all to him; but because of the waste of opportunity that this election brought for him. Fresh after being anointed as the President of India’s grand old party and heading into the most crucial elections since 2014, Rahul chose to play a major role in the campaign. This choice was a mistake, as INC Karnataka was not weaker than BJP Karnataka, and he is no Modi. Of the 14 rallies which Rahul spearheaded, which showcased his usual lack of eloquence, Congress lost in all 14.

Karnataka is one of the few states where the local leadership of Congress had grown indigenously and was very well respected. There was no need for an external “import” to be thrust into it. Arguably this was done to position him well as Congress’ PM candidate for 2019, but this cost the congress miserably. From what I heard from the on-ground chatter during the campaign, the average party worker in congress was not impressed with Rahul’s unsolicited presence, who knew little about the state and cared even lesser. It has not helped that in the aftermath, Rahul is nowhere to be seen. Possibly, just like Capt. Amarinder Singh in Punjab, had this election been spearheaded by the well-respected local leader – Siddaramaiah, Congress would have fared better. Rahul just got in the way of a potentially better result.

Karnataka elections are being considered the first WhatsApp-first election in India.

Targeted reinforcement of messaging isn’t a new tactic. Political communicators have been using highly accurate audience profiling to target specific messages very accurately. But WhatsApp has changed its impact greatly. With WhatsApp, it’s difficult to profile users and to track responses, both of which take time. But once you do profile users, the data is rich.

UP elections of 2016 were the first instance where WhatsApp was explored extensively by parties to supplement and complement physical outreach by booth level workers. It was even built up in the same way, with a pyramidal organisational structure and flow of information. In Karnataka elections it was deployed heavily. By some estimates, 50,000 WhatsApp groups were created between the two large parties, capable of teaching 10 million people within minutes.

The groups were administered by party workers, who would add people within their booth/ward/constituency, and bombard them with messaging extremely specific to their regions. More crucially, unverified chatter could be injected into these networks and it would become untraceable soon after. The goal of such messaging ranged from marginally converting fence sitters to extensively increasing voter turnout of supporters. I came across instances of party workers embedding “spies” in opponents’ WhatsApp groups, and gathering crucial information on them – where they are likely to rally or cause unrest, what hashtags they intended to trend and so on; and catch them by surprise.

If Twitter made anonymity an asset, WhatsApp has capitalised it to the max.

What other factors worked? Do you think Congress could have done a few things differently and won it? How does this impact 2019 elections? Share your views in comments below or on Twitter with me at @HemantGaule

Of wins, losses and more