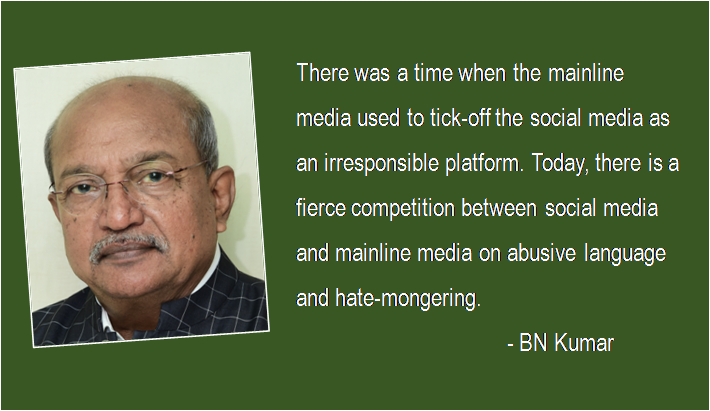 The recent death of Congress spokesperson due to heart attack during a heated TV debate has kicked up a storm over the big, noisy feature of the small screen discussions that has now become a national phenomenon.

When we entered journalism 45 years ago, we were told that the news is supposed to inform and editorial to analyse and help you form an opinion about a development. We just had the luxury of All India Radio (AIR) news and Doordarshan was taking shape, visible mainly in rural areas. In fact, we had to run to a village panchayat near Hyderabad to see Indira Gandhi’s Red Fort address. What a contrast – we had to run to a five-star hotel to view CNN during the Gulf war which subsequently led to the television news revolution and the advent of hundreds of news channels in all major Indian languages.

Much news has been aired ever since and not only the style of presentation but the very definition of the news has changed. Man biting dog is no more the news. It’s man bites snake and kills it that makes the news. That is as far as the definition goes. But breaking news goes well beyond any definition and anyone’s imagination: a judge arriving at his court room for the hearing of a case involving a celebrity or a well-known person leaving home for police station are all breaking news. What is the sanctity of breaking news if the breaking goes on for an entire day? And the trend goes on non-stop despite certain anchors admitting that breaking news is breaking down and news has become noise.

I used to keep facing questions on these aspects during panel discussions at a global communication conclaves or my media training sessions with corporates. My ready answer (or counter question) used to be to be: why do you watch that channel if you don’t like its style or Why don’t you use the power of the remote? In fact, I used to even admire the patience and courage of the person who would view the same breaking news throughout the day and then complain against that particular noisy channel!

Today, we have lost that power of the remote as the decibel levels of many news channels have gone up. The adage, what goes up must come down, or the parabola theory does not seem to apply to the shouting matches. On the contrary, there is a competition among them in shouting down the panelists and making the guests scream louder than the anchors. This is the unfortunate trend among many Indian language channels, too.

One has just seen a spokespersons from a big party continuously abusing and using un-parliamentary words against another major party man. And the language of a retired army officer was the drowning glory of any TV debate. Does filthy expression bring in patriotism?

TV discussions are supposed be part of our matured democracy and the civil society’s liberal expression of views. The moot question is: are we being civil?

There was a time when the mainline media used to tick-off the social media as an irresponsible platform. Today, there is a fierce competition between social media and mainline media on abusive language and hate-mongering. Unfortunately, the actors in both the media, in many cases, are the same. Even some news anchors take to social media to take on their guests, outside the studios, on the digital platform.

Now here is the major concern. This trend, which has begun as newstainment now transgressing the limits of tolerance. This dangerous trend has begun manifest in family lives and debates. The COVID-triggered lockdown has given lot of free time to many people to watch TV news channels. This has obviously contributed to the rising blood pressures.  I have seen family debates becoming awry. Ask any doctor or psychologist, he will tell you about the lurking dangers. I have seen family debates becoming awry and couple losing their cool and throwing the handle, literally and physically, at the slightest provocation.

Looking at my blood pressure, my doctor asked me if I watch TV news debates. He sympathised with my wife when he learnt that I am a media professional! Jokes apart, I have heard many doctors advising people in general not to watch the news or any violent programmes before sleeping.

The shouting bouts might help the news channels get some TRP ratings and social media likes for some time, but the editors and promoters need to look at the damage that the emotional charge is doing to the viewers.

There used to be live and lively debates in Mumbai suburban trains on current topics. It was a typical feature during the pre-March 2020 commuting. Today, the trains are not open for passengers. But tomorrow, when the Mumbai locals start carrying passengers normally, I am not sure if these debates are going to be normal. My fear is that people must have formed their opinions one way or the other during the lockdown-idle time, and will vent their strong views on their opponents.

I sincerely wish that my fears do not come true and that I will be proved wrong.

And that the civil society will look forward to civilized expression of opinions.

Are you a follower or a fan? How storytelling can create deep-connect with brands

Stories are in, but telling is the challenge