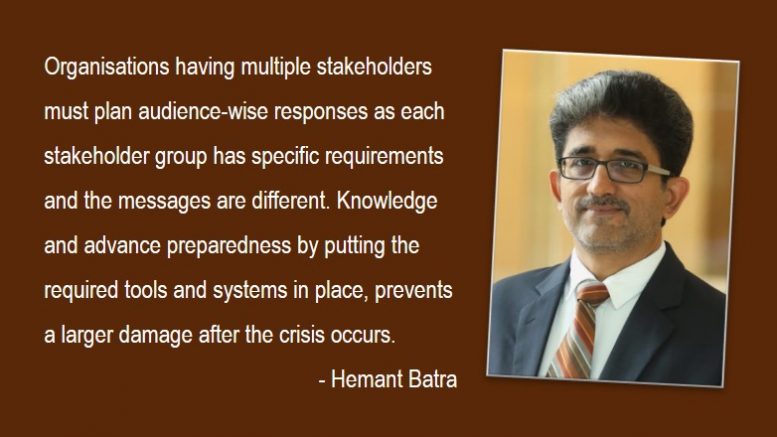 Few years back, when the staff of a leading airline, forcibly and violently removed a passenger from an overbooked plane, it resulted in widespread criticism. Its CEO aggravated the matter further by first giving a statement that the passenger was belligerent (the viral video clip showed the opposite) while praising & defending the crew’s action. Then he gave a generic statement “apologising for having to re-accommodate customers” and finally after facing public outrage, he issued another statement describing the incident as “truly horrific” and took full responsibility and apologised.

These flip-flop errors resulted in substantial damage to the airline’s reputation and its consumer perception dropped to a 10-year low. Apparently, the CEO also lost out on his planned promotion as a Chairman.

In another instance, a leading global coffee chain faced a case of racial discrimination last year, when two black men were arrested from one of their outlets. For damage control, the coffee chain communicated proactively, apologised profusely; the CEO personally met the persons affected, apologised and even announced an across-the-board staff training program to handle such situations. The stock price of this company was largely stable during this crisis.

In adverse situations, we realise the real strength of a company. The way senior team communicates during a crisis, will decide about their long-term reputation, its brand value and market capitalisation.

In many cases, the communication team and company spokespersons are caught unprepared when a major crisis hits the organisation. This sometimes leads to unintended errors by them and causes the crisis to flare up, resulting in major reputational damage and loss of business. In football analogy, we call it a ‘self-goal’.

Large organisations spend millions and sometimes billions of dollars in promoting and creating brand value of its products and enhancing reputation of the company. However, many of them do not have adequate plans and processes in place for crisis communications. As a result, when facing crisis, senior spokespersons commit avoidable communication errors – resulting in a mess.

In today’s activist environment, a crisis can come from any direction. Many issues can be predicted, some cannot be predicted. Due to competitive pressures, the cases of information and mis-information wars are also increasing dramatically. Social media has given customers and other stakeholders an omnipotent platform to vent their anger and aggravate any situation.

There are no fixed formulae to handle a crisis. Situational details will decide how much must be said, who will say it, mode of communication, format, etc. When the basic principles of crisis communications are understood, and the messages are clear, there is a good possibility of restricting the downside by advance preparedness.

And the list is finite and doable. A susceptibility audit can be done internally or with the assistance of professionals. It will help in preparing a list of issues that can go wrong. Many a times the CXOs know most of these issues. The effort should be to list them, begin a dialogue internally and put the entire process and media policy in place.

For example, banks have a risk of employee frauds, conflicts or client scams and its on-ground employees must know what to do about media queries. The regional head must be media trained to ensure appropriate response. The media policy should be clear to all employees. Basic drafts of holding statements must be ready and a trained crisis communicator from the public relations team must reach the ground zero at a short notice.

A multi-dimensional crisis will have lawyers enforcing restrictions on communications. Many of them are required, but some are due to their policy of ‘out-of-abundant-caution’. Now this can take the communication to another extreme, where public statements are written in legal language, spokespersons are cagey to give information, and in that atmosphere, nobody bothers about building confidence and credibility among various stakeholders.

Organisations having multiple stakeholders must plan audience-wise responses as each stakeholder group has specific requirements and the messages are different. Knowledge and advance preparedness by putting the required tools and systems in place, prevents a larger damage after the crisis occurs.

Fighting a crisis and protecting the corporate reputation is like going to a war. And the importance of advance preparedness can be understood by a simple quote from Norman Schwarzkopf, a US army general, who led the coalition forces during the Gulf war in 1990 ~ ‘The more you sweat in peace, the less you bleed in war.’ Founder & Managing Director at Veritas Reputation PR
Hemant is a chartered accountant with over two decades of experience in public relations, focused on corporate reputation management, financial communications and issues & crisis management. Some of the prestigious recognitions that add up to his repute are - ‘Asia-Pacific PR Professional of the Year – 2017’ at PRAwards Asia; ‘PR Professional of the Year (2016)’ at the Indian PR & Corporate Communications Awards by Exchange4Media; ‘Best Consultancy Professional – BFSI & Corporate (2016)’ at the Fulcrum Awards
SHARE TWEET PIN SHARE

Reengineering PR Strategy in a world of changing mindsets

How to start speaking to build your reputation

Here’s how vertical e-commerce brands can reach even higher