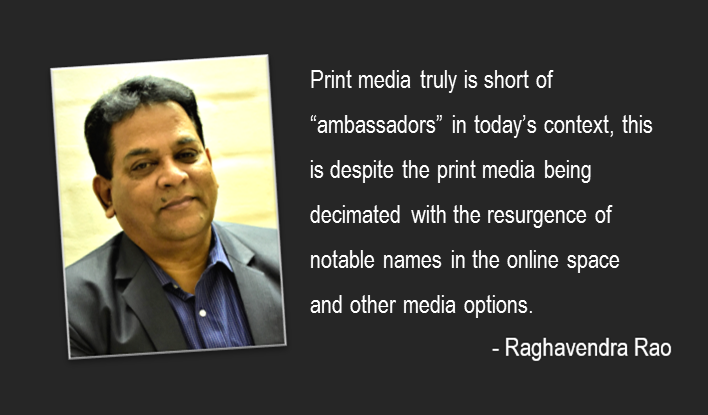 My previous article was on Brand Ambassadors while this article is an extension of the same but talks about media ambassadors.  Gone are the days when journalists were recognised with media houses. RK Lakshman Times of India (TOI), Mark Tully (BBC) Khushwant Singh (Illustrated weekly) to name a few. These were true media ambassadors. With growing media houses and media options there seems to be dearth of such ambassadors now. Media ambassadors are those who not only keep their flag high but also that of the media brand they represent. Goenka’s run Indian Express (before the split) was named as the newspaper which could make and fall government. An important point to note here is that Indian Express was the leading newspaper in India with maximum editions and highest circulation at one point ahead of TOI.  It also works in reverse mode, I shall refrain from naming the person but there are media houses like ‘Tehelka’ which was born because of “sting” operation and were well respected but fell out as the Publisher himself was caught napping. There have been few TV media houses also which had dubious financial dealings which led to their fall. In the same breath we must not forget that “Nira radia” tape issue in which one of the most visible anchor of the lead TV channel was also trapped. This led to her ratings going down and she had to make a quiet exit.

Even state owned Doordarshan (DD) saw many ambassadors in their initial days. Salma Sultan, Neeti Ravindran, Reeny Simon, Tajeshwar Singh etc. Many watchers recollect as to how they use to wait to watch and hear news from these stalwarts. Not to forget that even the weekly “Rangoli” on DD once had Hema Malini as their ambassador and we have seen many big names hosting the show like Juhi Chawla, Renuka Sahane and very recently Sawra Bhaskar too.

Even on radio the state owned All India radio (AIR) produced many such names especially when cricket commentary was aired names like Anant Setalvad, Dr. Narottam Puri, Balu Alagan, Suresh Saraiya. Not to miss Ameen Sayani who was the voice of Binaca Geet Mala on Radio Ceylon he was a brand in himself who rode the program for ages. Infact it was Dr Narottam Puri who brought grace to cricket commentary on DD TV later. Most recently it was Harsha Bogle who created a space for himself in the TV commentary space despite being a non cricketer. However with glamorisation of cricket now it is Ex cricketers now who are part of the commentary team.

AIR which is a Public Service Broadcaster (PSB) and is not a commercial venture but with the PM announcing his “Mann Ki baat” since his last tenure has swelled balance sheet and in this case the PM of India becomes a media ambassador for AIR. Most important he has been consistent with the program which truly makes him the media ambassador. To add to its reach even most commercial FM channels also air this on Sunday’s in both English and Regional versions while it is not mandatory by the PSB.

Post Mid 1990’s when the TV media started looking up as an alternative media there was reorganisation of news channels from the year 2000 onwards India saw a splurge of news channels and the new investors started poaching anchors, news presenters, notable names from existing popular channels. There was a virtual war of sorts in TV news media rooms. With political scene changing in the growing India channels are being recognised as either with the current establishment or against it. Today TV news has become noisy and there is no “news” but only “views”. It is difficult to find a ‘neutral’ channel when it comes to news content.

Print media truly is short of “ambassadors” in today’s context, this is despite the print media being decimated with the resurgence of notable names in the online space and other media options. Some lead print media where one’s networking is ‘good’ still respond positively but with many young talents being accommodated there seems to be no briefing to them on handing corporate or facilitators (PR Agencies). But the lead print media journalists beforehand inform the facilitators while “I shall meet but I am not promising a story”. Many new talents hence are unable to handle with precision and they either ignore, or overlook, or sometimes are rude and many do not even respond to mails sent to them on new concepts or ideas. This attitude sends a wrong message to corporate, Founders of start-ups, CXO’s & COO of many organisations.

There is also an observation that many regional media are forthcoming but the facilitators value them only to the extent when the coverage appears. It is one more clip that’s it for the facilitators. This sends a wrong message to the media in general. But today India has high regional readership with growing literacy rates in India it is the regional media which is growing at a faster rate than the English media. If the PR agencies take up an in-depth reading regional media has all that which an English media can offer. Quality print, business pages, metro pages, sports pages, special supplements on important occasions it has everything which a brand needs. Brands can use regional media effectively to take themselves to the next level in their own target markets. If used judiciously it is a win-win model. But seldom have the facilitators recognised it.

In a nutshell I would like to summarise that while print media remains a strong tool to build a brand, the journalists must act like brand ambassadors of respective media houses. In the same breath I would like to say that facilitators must also give equal importance to regional media in their own right and use them as genuine tools in a brand building process.

What US PR Agencies Require of New-Hire Jr. Account Executives. Is This True in Your Firm?

2022 – The year of ‘Systemic Renaissance’ for PR and Communications