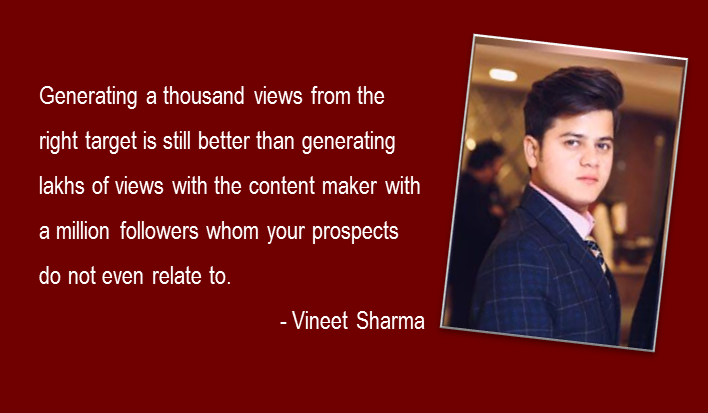 Are the new age influencers able to contribute towards fulfilling the campaign’s objective? Are they skilled enough to influence their own audience to persuade them to make that impulsive purchasing move?

India is witnessing the rise of the social media platform usages. With lower than ever data tariffs and increasing number of smartphone users, the data consumption in India per smartphone has risen to nearly 10GBs per month. Majority of the brands are adapting influencer marketing to accelerate their campaigns and penetrate deeper into the minds of their audience.  According to the data published in Influencer Marketing Hub, the industry that did not even exist five years ago, was worth $1.7 billion in 2016 and has grown more than three times to reach the value of $5.6 billion in 2019.

It could vary as per the requirement, the number of followers and post likes could determine if you can be verified as an influencer. It could be a minimum of 10K followers or 100K followers, depending upon the budget and criterion set by the brand. What is required to be termed as an influencer? The answer is nothing. No protocols and benchmarks are set to be regarded as an influencer. All you need is the ability to create viral content, generate massive views with whooping post likes, and you can be tagged as an influencer. There are certain authentic influencers who genuinely represent their audience to the core. It’s the result of their hard work and passion that they could generate that mass following but the real question stays the same, where’s the influence?

We saw massive advertisement spent on the new age platforms like Tik-Tok & Instagram under the “influencer marketing”. But, the need of the hour is to realise, “WHAT IS THE INFLUENCE OF THESE INFLUENCERS?” Brands really need to brainstorm and analyse, millions of followers and post likes do not necessarily imply “A MILLION SALES”. Brands of all scales are burning money into influencer marketing, believing that they are connecting with real people but in reality, that’s not the case. The research data by Swedish e-commerce start-up A Good Company and data analytics firm HypeAuditor revealed that 16 MILLION social media accounts of Indian influencers are fake. In reality, the brands are pouring money down the drain and giving out unnecessary free products to someone who may have acquired the mass-following through his tech companion.

Not only this, according to the article by Business Insider, an Instagram star sparked the burst of influencer bubble when she failed to sell 36 T-shirts to her 2.6 million followers. The 18-year-old said she was launching a clothing line, but could not generate the minimum target to sell 36 items in order for the company to continue producing them. Perhaps she could be forgiven to speculate her massive follower count would lead to sales, but what about the marketing heads and communications strategists who are busy aligning their campaign strategies with influencer marketing?

According to new research from cybersecurity firm Cheq, influencer fraud, that includes purchased fake followers and fake virality is expected to cost businesses around $1.3 billion this year. If you happen to be an advertiser/brand manager who is solely reliant on influencers, you really need to ensure that you make the right choice of a person to help with your marketing. Influencer Marketing can play a very vital role to your marketing plan. You can leverage the following of the influencer to promote your brand in a powerful way, but the unavoidable question is, does the massive following really imply the most influence? Not at all!

The difference between influencer and content creator shall help you analyse. Going by the etymology, “influencer” states, the assessment that defines an influencer is the degree of influence they can generate on the buying decisions over the audience they represent. If an “influencer” cannot represent a particular core segment of an audience, they’re a content maker rather than an influencer which is true in terms of the majority of the Tik-Tok famed influencers.

Brands need to set up certain parameters prior to closing the deals on social media platforms. The influencer has to contribute towards fulfilling the campaign’s objective and should be able to influence their own audience that forces them to make that impulsive move. The worst part of the endorsement is if no one remembers your brand even after receiving lakhs of likes. My advice to campaign planners would be, if you’re exploring influencers for your next marketing campaign, make sure he/she resonates with your targeted audience. Micro-Influencers too can yield effective results if chosen wisely. Why are these effective even with a following below 20k? Data shows that micro-influencers establish  a deeper & authentic connection with their audience. This directly yields acceptance and a sense of loyalty among their audience. Generating a thousand views from the right target is still better than generating lakhs of views with the content maker with a million followers whom your prospects do not even relate to. Apart from the followers, another important aspect is to look at the post engagement levels (comments, likes, and shares) and the degree of interaction among the influencers and their followers. As Mark Zuckerberg, Co-founder, Facebook rightly put, “People influence people. Nothing influences people more than a recommendation from a trusted friend. A trusted referral influences people more than the best broadcast message. A trusted referral is the Holy Grail of advertising.” 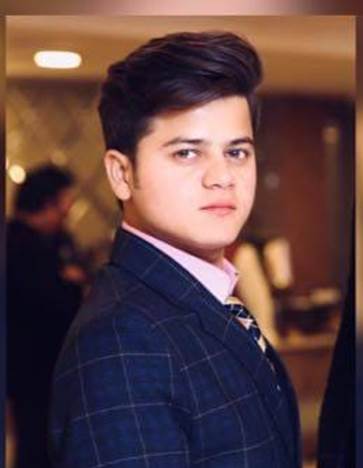 A firm believer of the motto, “Smart Men speak because they have something to say, fools speak because they have to say something,” Vineet Sharma is the PR Manager at Media Corridors. Highly passionate & enthusiastic communications professional who aims to deliver strong communication and PR strategies with extensive research to yield desired satisfaction. He loves group brainstorming and appreciates the feeling of the team winning.
SHARE TWEET PIN SHARE

Be the first to comment on "What is the Influence of Influencers?"

How strategic communication can help build your brand