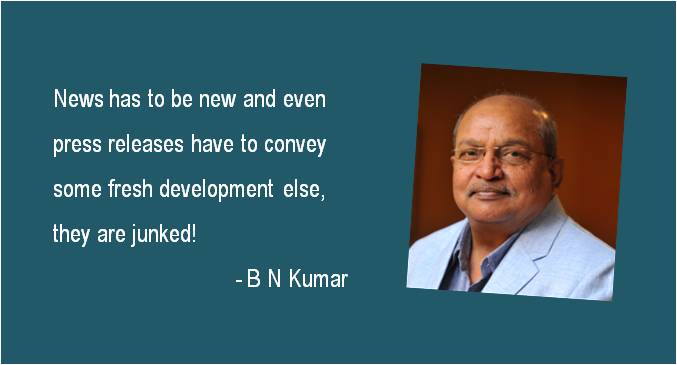 Corporate communications professionals and public relations firms often face this question from their bosses or clients – “why isn’t the media covering our press releases and announcements?”

Like any product, news has to interest its customers. For a journalist, the news is his product and his reader is his customer. Each and every time, he has to keep his reader’s interest in mind. News has to be new. In fact, I keep saying at my media training sessions that. What is new is news, Baaki Sab Bakwaas!

It has to be of relevance to the reader. News is also the most perishable commodity. The moment you see a flash on your television set or get alert through your news app on your smart phone, the novelty of the news is over. For instance if someone tells you about that particular development even after a minute, you say: Yeah, I already know it!

Like any other product that you buy in the market, news also has an expiry date. It is immediate!

But today the scene is different. Journalists do not have time to read through an entire press release that comes from a company or PR firm. There are hundreds of companies and scores of PR firms that dish out press releases day in and day out. Earlier, the size of the waste paper bins used to increase to cater to the trash coming from companies and PR people. Today, a journalist has the option of using the ‘delete’ button on his computer or smart phone. Journalists are now taught to get something new on their own and not bother about news releases which are sent to all publications anyway. You are right, EXCLUSIVE is the key word!

Over the years, the number of newspapers and TV channels has increased dramatically and in the current cut-throat competition scenario and race for TRPs and readerships all media persons run after exclusives and something new.

So, my dear press release dispensing machines, do look for that ‘exclusive’ or new to create news for your companies and clients. A routine press release at best serves an FYI purpose or may find place in a 20-word brief.

Also, it is important to inform the media what you would like to read and see. For instance, will you sitting in Mumbai or Delhi be interested if your favorite newspaper runs a front page story on race course in Mysore? So, why give such information through your press release and expect coverage?

One might wonder as to why these TV channels keep showing the same news as Breaking News throughout the day! That Breaking is obviously meant for the person who is watching the news at that particular time. Breaking news is breaking down, as friend Rajdeep Sardesai says!

In any case, we are not supposed to be watching the news channels round the clock even if we do not have anything better to do! News channels, as compared to entertainment channels, do not command much TRPs. In fact they are the least watched – however big or small they could be!

There was a time when ISO certification or awards made news. They have lost their novelty. And as regards awards, every media house worth its name has some kind of awards. For example, The Indian Express does not cover Filmfare awards, noR does the Times group write about Screen awards. The only film awards that all newspapers or channels cover could be the IIFA awards since they are on a neutral platform. The Economic Times does not even invite the competition media to cover its annual awards.

Let us start looking for something interesting for the reader – and not necessarily big – when we approach media.

Now, you may wonder as to how journalists run for the news. Watch this space.

Garbage In, Garbage Out!