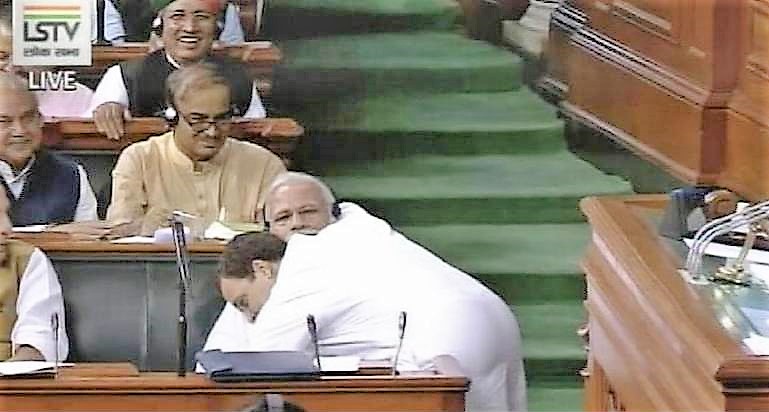 Did Rahul Gandhi boost his reputation when he hugged Prime Minister Narendra Modi after his fiery speech against the “target” of his hug last week? I just saw an online poll showing 72% saying ‘no’ and 28% saying ‘yes’ but it does not really matter. Apart from the fact that an English language online poll is not a reliable indicator in a nation of 1.3 billion people half of whom have still have no meaningful Internet access, there is a huge amount of vagueness in the whole thing that looks like a modern art painting that triggers interpretations that are subjective.

However, I do believe that the hug set tongues wagging and the Congress president’s claim in a tweet that his intention was to take the political discourse from the BJP’s love will set tongues wagging. The debate itself is a minor gain for Congress though the other side is that the hug took away the focus from all the solid points he made in the parliamentary debate during the no-confidence motion against Modi’s government. Another way of looking at it is that it equally took away the focus from the prime minister’s own speech.

From a reputation management point of view, the focus shifted from words to visuals. Is that a good thing? Cynical realists in media management might think so. I am reminded of the manipulative role of the media advisor to the US president hilariously played by Robert De Niro in ‘Wag The Dog’ (a must-see movie for journalists and media watchers). The need for emphasis on visuals and the emotions of ordinary people, which is  quite different from the words of the intellectual or argumentative type, was substantial in that film.

The reference by columnist Priya Ramani to the recent World Cup football final, when Croatia’s President Kolinda Grabar-Kitarovic hugged and comforted her players who were losers, is most telling. I am personally certain that headlines that went on the lines of ‘France wins the cup, Croatia the hearts’ played a role in a De Niro-like advisor in Rahul Gandhi’s inner circle coming up with a suggestion that he should try a hug on Modi in the land of ‘Gandhigiri’. A hug, a charm offensive or a joke can break the tension and is a good PR tool provided it is employed judiciously. It is a calculated risk that can also backfire, especially when you have formidable opponents. RSS supporters were quick to point out that the great Shivaji was hugged by the treacherous Afzal Khan in a historic assassination attempt. Khan was killed by Shivaji in the mysterious encounter on which narratives might differ.

Rahul Gandhi’s parliamentary hug falls squarely in that league. Rahul Gandhi’s own Twitter explanation was that he wanted the debate to shift from hate to love but the fact that he also loaded a wink into the incident made it clearly an act of gimmick rather than a perceived act of sincere Gandhigiri. That is not advisable for a future prime minister wannabe.

But, from a reputation manager’s point of view, the gamble was worth it because there will be a lot of ‘chai pe charcha’ on the issue. My personal view is that such gimmicks pay off when the public mood is already set, not otherwise. I think the hug was premature and shoddily executed. It would have been better for Rahul Gandhi to mock his own name the way he joked about his own ‘Pappu’ tag. He could have sarcastically referred to how Gandhi and Modi are both from Gujarat but only one of them stands for love. Employing suitable contrasts works far better than controversial love in political PR. The bottomline: Don’t try corporate PR style in politically charged situations!

In Conversation with Margery Kraus