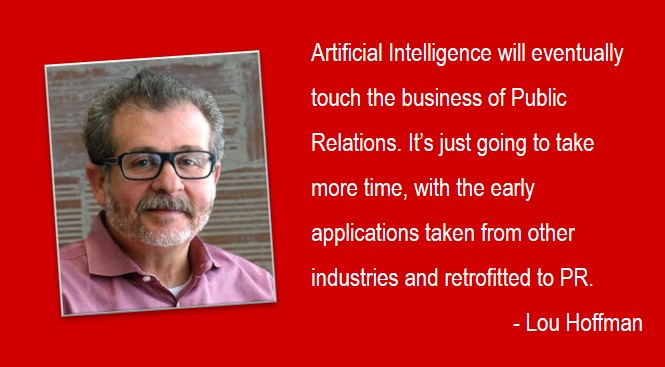 Let’s start with the first question and look into the crystal ball — always a dicey situation when it comes to technology. Even brainiacs like Stephen Hawking could not foresee mobile apps upending the hospitality industry and Facebook gaining the clout of a sovereign state.

Still, a gaze into the crystal ball combined with stats on venture capital point to the conclusion that Artificial Intelligence (AI) won’t impact the PR profession in the short term.

At a time when everyone touts AI as the next big thing, why do I say this?

You would think that a scoop from this pot of gold — and US$36.75B over the past four years shapes a sizable pot — would find its way to the PR business. Unfortunately, that’s not how it plays out. The funding is going into areas such as mobile marketing, e-commerce, advertising and web/mobile analytics. Social media, which does intersect with PR, does land in the top-10 list, however.

The size of what’s called the total addressable market (TAM) determines where the VCs place their bets. Big TAMs garner piles of chips. Small TAMS get ignored. The advertising industry spends a massive amount of money on technology. That’s not the case in the Public Relations where PR-centric technology consists largely of media databases, news release distribution services and share-of-voice tools (which sometimes work).

No question, AI will eventually touch the PR business. It’s just going to take more time with the early applications taken from other industries and retrofitted to PR.

In the meantime, if there are any VCs out there intrigued with the potential of investing in a market — albeit, a smaller one, with little competition — I offer one suggestion for developing AI products that would be a game changer for the PR business.

Help PR practitioners improve the relevance of their pitches to journalists.

Is there any activity more broken in our profession than “the pitch?”

The worse offender is the mass blast. Armed with a media database, the PR person can build a target list of 100-plus journalists with a few clicks. It doesn’t cost extra to increase the list, so that’s exactly what many do with the rationale, “Hey, the more journalists I target, the greater the probability that someone will bite.” Then, the PR person crafts a generic pitch, presses the button and voilà, the pitch is magically whisked to the target audience. Even if the pitch has relevance — and that’s a big “if” given the generic nature of the content — journalists can discern the mass-blast quality and don’t want to be writing the same story as their competitors.

For enlightened PR professionals with enlightened clients or stakeholders who do take the time to craft custom pitches, they’re still constrained by time. It’s heavy lifting to up the relevance quotient.

And imagine the consultancy or PR department continually feeding the results of the pitches into the AI engine with both successes and failures to “learn” from the experience, which in turn strengthens future input for that particular journalist as well as the publication where he or she works.

As noted earlier, effective PR practitioners already do a crude form of this, studying past stories from a given journalist to shape a pitch that fits the journalist’s profile. But the human mind can’t make sense of a data set consisting of over a hundred articles — say all the tech-related articles in The Economist over the last six months — with a word count that might be roughly equivalent to a novel.

I don’t think we’ll ever see science replace the expertise for creating a story that grabs the reader by the scruff of the neck.

But applying science to the PR pitch, now that’s a different story.

Be the first to comment on "What can Public Relations expect from AI? What do we want from AI?"