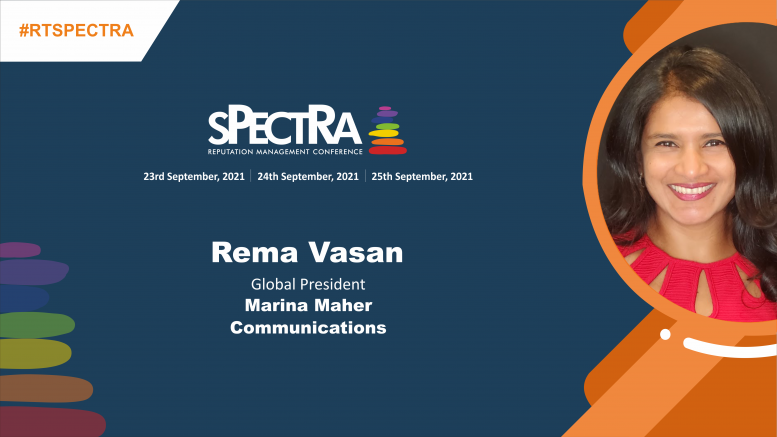 No one can dispute that culture affects how we think and how we act as individuals. So understanding the importance of culture, one can see that it definitely has implications for business. “How influence and culture will catapult businesses in the future!” was the topic of discussed by Rema Vasan, Global President, Marina Maher Communications.

The power of influence stepped into her life when she was very young. Her neighbour was a copywriter, who delved into the power of ideas, concepts, words to help persuade people behave differently; clearly displaying the power of influence, which had a huge  impact on her. “As a child we are looking for ways to be taken more seriously,” she recalled and how she did “develop a deep appreciation for how to communicate, how to observe the world around me and how to express my point of view effectively”.

As a first generation immigrant from India, to US, she truly believes that diversity in thought and perspective is one of the greatest aspects you can bring to any organisation. “We have a position as the next generation communications agency that uses influence and culture to catapult business and get the world talking,” she said and added that having worked in Asia, Europe and North America she has seen the impact of influence of culture on business, through many different lenses.

Influence and culture can be very powerful tools

We all recognise how important reputation of brands in business are; there are a number of tools and my favourite tools are – influence and culture, she disclosed. They can be very powerful. Defining ‘culture’, it is really dynamic and everchanging and is globally diverse as the people who provide it. ‘Influence’ is certainly in the eye of the beholder and is often generated by influencers of all types; and influencers can include celebrities, athletes, subject matter experts, friends or family, online raters and reviewers, news media, NGOs and so on. But, one thing common is that they are people and, people are predictable. So, when we get this combination of the dynamic nature of culture with the unpredictability of influencers, we get an interesting challenge that involves a really tenuous balancing act, she explained and added that “even though this balancing act can be tricky, it’s worth the effort”.

Influencers and culture have a very special relationship – “culture can create influencers and influencers can shape culture”. At a time when many young people felt an outrage at the planet threat, which they attributed to the older generation, there emerged – Greta Thunberg, the young Swedish teenager who wanted to save the planet, and shaped a whole movement around it. On the flip side, there is Lilly Singh, YouTube’s superwoman, who used her influence to change the culture of late night TV. It is all about challenging the status quo.

To harness the potential of culture, influence and catapult the business forward they worked out a simple formula – reach+relevance+authority=influence. Brands need to influence their target audiences in order to generate measurable business results, so we need to reach the right people at a scale that will drive volume. While relevance is more important than ever before, brands are prioritising in finding and amplifying their goodness and their place in the culture. Storytelling is the medium through which brands can portray their relevance because storytelling is one of the oldest ways humans use to make sense of the world and subsequently, a brand, she outlined. And, why authority? Because of the size of media platforms, explosion of content creation, democratisation of content distribution and the epidemic of misinformation, people have rightfully got skeptical. Authority gets them to trust you as a brand. When you look at influencers, they should deliver on reach, authority and help tell the story of the brand and its place in culture.

Then talking about how to activate with excellence, she pinpointed four best practices established at MMC: audience-first planning, high impact creatives, cultural trend sensing and how important it is to measure and optimise. Translate your culture understanding needs to designing social media content – that’s why the marriage of art and science is so critical, she shared, taking the example of Nike’s commitment to the black community movement in its campaign – “Believe in something even if it means sacrificing everything” which really paid off for the brand. So, it’s time for brands to ask – are my brand values aligned or added to this conversation?

Coming to tracking measurement, she recommended creating a measurement framework that tracks a relevant matrix to the overall business objectives of the brand. Influencer marketing should not live in a vacuum, but should be part of the marketing mix and should not be measured by reach, engagement etc.

How can you ‘future proof’ your efforts? Influencer marketing continues to evolve over time and brands find new ways to catapult their business forward. Going on to list four trends that are gaining traction, she pointed out to social commerce and shoppable videos that are everywhere, diversity and representation is at the core, keeping it real for GenZ, and the rise of audio influencers. All major social media platforms display an annual growth rate of over 31%; the global market is to hit 600 billion by 2027. Facebook, Instagram, Snapchat, Twitter, Reddit, Tik Tok are platforms to watch out for this year. The rise of audio influencers – there is a lot of buzz over Clubhouse, and Twitter, Facebook have created competitive products too. With so much action rocking the scene, she stated – “It’s an exciting time to be in communication”.

Tap into the power of communication

In the Q/A session, Vivaan Gideon, VMware brought up the focus on DEI and she felt that overall, brands are increasing their focus on diversity, which is leading to greater partnership opportunities for diversity influencers. There is a greater desire to see representation of various forms of diversity, including body types, disabilities, age, gender and so on. Brands need to redefine now they see diversity, was her firm belief.

And, how should brands measure the impact of influencer campaigns? That’s a million dollar question, was her quick uptake. What is the hope for the future of communication, as it continues to evolve? Her parting shot was that we continue to innovate and tap into the power of communication.

Be the first to comment on "SPECTRA 2021: How influence and culture will catapult businesses in the future"

Planning a PR event in the digital age

The goodness of life