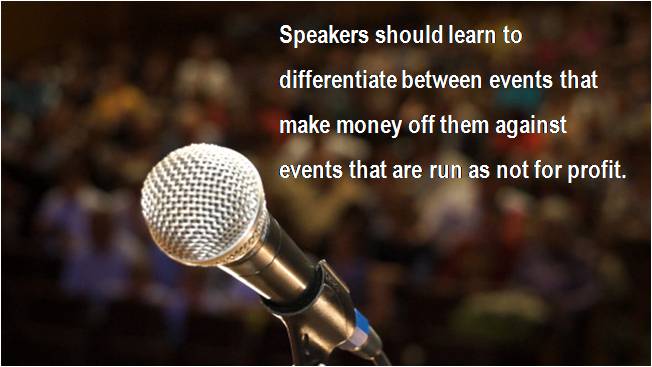 There are four forms of communication: Verbal, non-verbal, visual and written. Verbal communication is of four types: In the professional world – Public-to-many and Private-to-one or many and in the non-work environment – Personal-to-many and One-on-One.

The world of Public Relations deals has a lot to do with Public Speaking. Very often we see our clients speaking at forums, we invite others to speak at our client forums and we ourselves are expected from time to time to speak in public.

In the west Speakers Bureaus have flourished for over half a century. In India, these have emerged in the last five years. While it is largely easy money for the bureaus I feel there needs to be a voice of dissent against the way the bureaus function.

Most classroom sessions in an academic institute including regular, guest and visiting lectures are carried out by professors or practitioners. They either earn a salary or collect an honorarium. In some cases, they teach with no monetary exchange. Persuasive speeches are part of political discourses, religious affairs and in the world of business part and parcel of sales and marketing. These do not involve money. Speaking to actuate and speaking to entertain is when the money ball starts rolling. The exception could be raising a toast or offering a eulogy. In most other cases there is money involved at some level. Be it compering an event, delivering a keynote, being part of a panel discussion or a comedy show. While people who speak to earn a living have every reason to charge a fee, those who speak to promote themselves, their book, their brand or their school of thought should be mindful when charging a fee unless the fee directly goes to an independent charity.

Yes! The argument in favour of them charging a hefty fee maybe stronger. But when journalists charge money to speak at an event whose audience has made him/ her what he/she is. Or if a businessman dealing with a specific industry charges a fee for a motivational talk it is nothing but heady capitalism at play. And then the bias of personal connection plays out in its own way. I know a speaker who was approached by two people for the same event, one directly by someone who worked with him previously and the other through a bureau. While he instantly agreed over SMS to speak for free to his former colleague, the speakers’ bureau got back after three days quoting a fee of Rs 3 lakh for a 30-minute speech. Ridiculous at best!

Well, to each their own but the crazy demands that some men and women make, come across as greed which is unfortunate. The Clintons have made millions of dollars and so have several others. My thought is that speakers should learn to differentiate between events that make money off them or those that are organised by organisations that make profits against events that are run as not for profit. The day is not far when speaker bureaus that partner with charities will emerge where each group will consist of 20 speakers who charge a 100,000 each for 10 engagements annually and 20 million will be raised to help causes thus making a difference.

Be the first to comment on "Are speaker bureaus fair play? I think not."

PRAXIS2022: The Purpose of Sustainability in Futureproofing your Communications