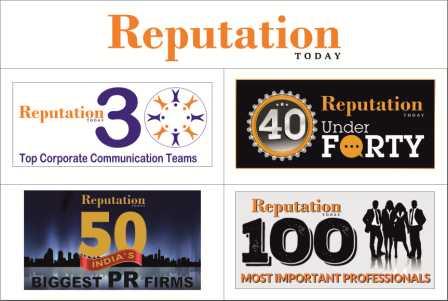 There are lists galore and the world loves them. Publications have made bestsellers out of lists. Lists done in an erudite manner are well accepted. When Reputation Today was launched last year it experimented with half a dozen lists based on solid research and there was an instant demand for more of those lists. So, we sat back and pondered on what are the four or five lists we would work on annually that would –

a) engage the intelligent communicator

b) benefit the communication professional and

c) make an impact in the business community

We realised that there was a need for a handful of lists and that we would take the lead in putting these together. First, a list of the 50 biggest PR firms by revenue. This list is handy in letting clients and potential clients know the size of the firm they engage with. It also puts an end to random claims of being the biggest by number of people, number of offices or number of clients. An evolving economy requires a list like this to create higher quality of servicing standards and helps professionals what kind of a PR firm they would like to join. I wrote a column a few weeks ago, about the 17 to 20 biggest firms but those were based on a basic research. We will go one step further and open a window of submission to firms to present their figures between April 2nd and May 10th so we can publish this list online in June.

There is no ranking of the leading corporate communications teams. By team we mean a set-up of atleast two members. One or two organisations stand out because they have ambitious leaders at the helm of their communication departments. But there are several organisations doing extremely well and do not get recognized. We will start by publishing a list of the 30 Top Corporate Communications departments based on a ranking system we have created that is points based. We will make improvements on the way. All corporate communication heads or their nominees are invited to fill a questionnaire that is available on the website during this week. The nominations run between February 1st and March 2nd week.

At the end of last year, we created India’s first 40 under Forty list to recognize the smartest and the brightest, both in-house and in consultancies. The list was published in January and we received encouraging feedback. We will open nominations for 40 days starting August 1st for this list as well. And publish the list online and in print in December. This time those who submit names for this list will pay a redeemable fee and a jury of four professionals will select the forty. Those who have featured in the list will not be eligible to feature again.

Lastly, we have adequate role models in our business and several among them are hidden gems. They run large and giant consultancies. They manage big budget departments in-house and they support the PR function by offering outstanding tools and services. It is time to list the 100 women and men who we believe are the most important professionals in our community. The nominations for these will run from May 15th to June 15th and the list will be out by the end of September in a special issue. It will comprise 50 from consultancies and 50 from in-house departments with an equal mix of men and women.

We look forward to your feedback we hope these lists help the professional community move to the next level as we try to enhance the reputation of the profession and take pride in it.

Be the first to comment on "The age of Listicles!"

The choice is ours to make