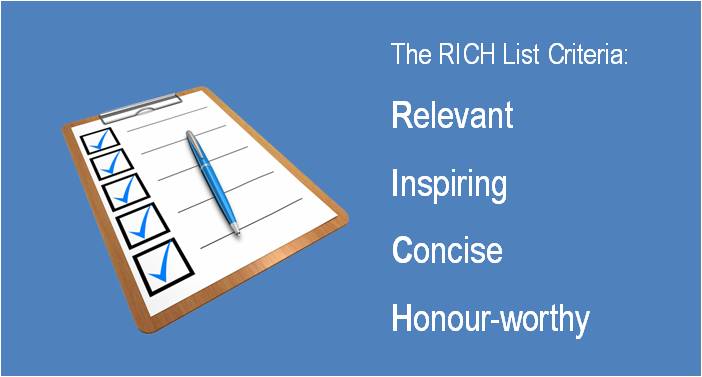 We all love lists and when these lists tick the RICH criteria – Relevant, Inspiring, Concise and Honourworthy – they become more sought after. Reputation Today seeks to engage with the intelligent communicator through its content – in print, on the portal as well as through its platforms. We are clear we will have four platforms for communicators over the year. We have tested all of them, some of them more than once. And we have realised that each platform will see the reveal of a list that will find its place in print and become a record for the community of professionals. So, our inaugural list will be the Top companies by revenue with an extended list available online. This is a no-brainer and we mentioned the methodology for this.

Our second list will be of the Top 30 corporate communications teams. We will find these through an open survey available for corporate communications teams of two or more members to fill-in online. We will announce the Top 30 teams online by the end of March and publish their names in the magazine in April. We may seek the help of an advisory council to arrive at the list. For single member departments, there is the Fulcrum to bank on.

The next of our lists will be unveiled at PRAXIS and will feature the 100 Most Important Communicators in the country. The three lists mentioned above will be put together based on data that is available to the content team and will be the prerogative of the Editorial board, based on adequate research. We will seek direct as well as secondary nominations for these lists.

The final list at the end of the year will be the 40 under 40 – the first batch of which was announced in January and celebrated at the Super Night. These will be chosen with equal representation of men and women with at least ten from each of the three major metros and equally from in-house and consulting. For this we will invite nominations in August and have a four-member jury selecting the toppers. This will have a fee that will be fully redeemable in the following year. While one can feature in the first three lists time and again, the 40 under 40 honourees will not get to apply a second time.

Relevant – Respect for a list is subjective. Some care about them, some don’t. But the ability to ensure the list is relevant to the intended audience is paramount. These lists have worked well in other sectors and also in the same sector overseas. I always hoped the global media outlets would create a list for India on all these themes. Since they did not bell the cat we chose to do so as there certainly was a need for these kinds of lists.

Inspiring – One of the by-products of a list is that it is there for all to see and gain inspiration from. It also helps to promote the profession among those who are evaluating career options. Most importantly it enhances the reputation of the profession because of the facts and figures that go along with the list when published. A good list is shared widely, including by those who do not feature in the list.

Concise – A list has to be made on the basis of a fool-proof policy and should be finite. It cannot be endless. Hence the lists you will see here annually will be 20 top consulting firms, 30 top in-house teams, 40 leading professionals under forty and 100 Most Important Communicators from consulting and client side. These lists will become an annual feature.

Honour-worthy – By this we mean to say that organisations or individuals featuring in these lists will feel truly rewarded and flaunt it at the right time and right place. It will be considered a badge of honour and a matter of genuine pride. Featuring in a credible list will make the one recognised want to tell the world about being chosen.

Check in on your feelings!