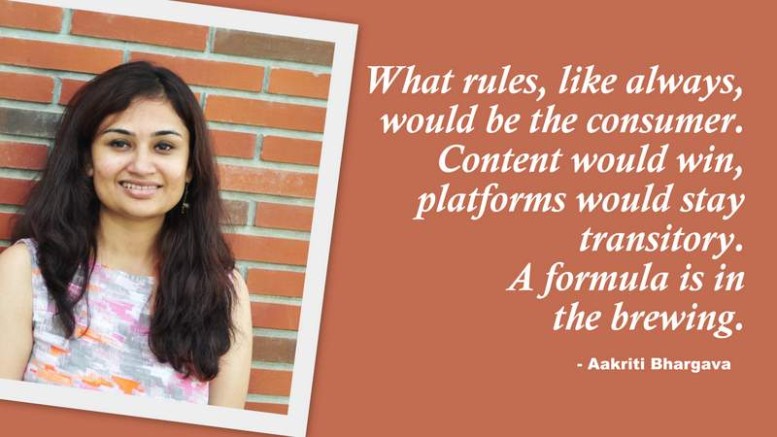 “When was the last time I held a print copy of The Economic Times?” muttered CXO of an emerging startup to himself. The blank expression on his face was worth a million words questioning the very existence of the print industry.

Dig a little deeper and you would find, he knows all that he needs to; but his consumption patterns differ from how Media Nazis designed it 50 years back. With emergence of new media and new platforms, a lot has changed. The consumer has changed.

“Who is Arnab Goswami?” – does not come with a hiccup to Mr. Transitory. He does not believe in the concept of TV. He is the one who made YouTube what it is today and the likes of TechCrunch grew on. Do not confuse him to be naïve, because he knows the nitty-gritty of politics and startups at the back of his hand; not because he reads 6 papers every morning, but he spends enough time on subjects that he cares about.

Mr. Transitory reads. What does he read though? This could vary from magazines on subjects of interest to books on kindle that he very proudly shows off! He also has subscription to print magazines and tabloids. Feedly, Wizikey and News Republic would reside on his smart phone; yet, the copies from daily subscription of HT lie unread on a shelf.

Mr. Transitory lives life on demand. From entertainment to utility, everything is an app away. Convenience is at the root of his consumption. So, if you think he will stick for an hour to watch news, you still don’t understand him well. He would watch News Hour, but at an hour of his own preference.

Content follows this new-age reader. He reaps what is called the ‘Inclination Dividend’.  He reads what he invests his time in and the subjects that make for interest within his fraternity. In such an era, content celebs rule the roost, like the ones who tickle funny bones or who satiate the intellectual soul within.
Creating his own rules and living by them, is the life-mojo of this new found breed. To him, his views decide whether print is extinct or still surviving. If he thinks, word is better read on paper vs Kindle, so be it.

So, we are still some time away from defining him as a digital native. However, it is evident; he would set patterns of consumption in the near future. What rules, like always, would be the consumer. Content would win, platforms would stay transitory. A formula is in the brewing.

Be the first to comment on "The curious case of Mr. Transitory"

How is Public Relations helping businesses build a brand, organically!