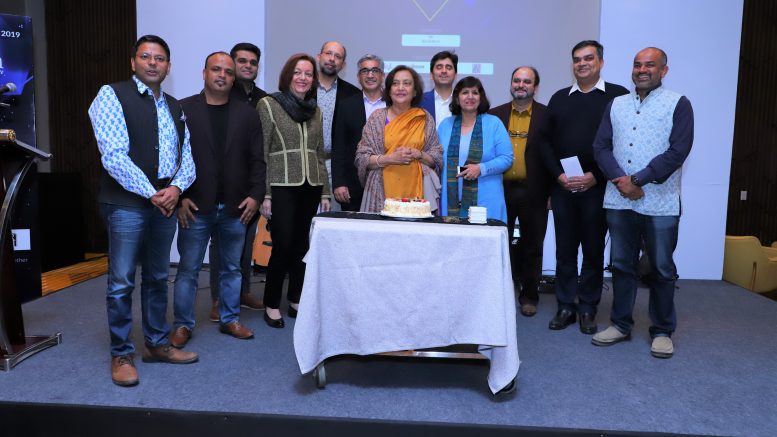 What would you do if you had seen a thousand moons? A prolonged celebration, I’m sure! Incidentally, according to the Hindu tradition, it is after the person has seen 1,000 full moons, that the date of the 80th birthday is fixed! And an 80th birthday is no mean accomplishment.

A veteran from the Indian Communications and Public Relations fraternity turned 80 this year and we cannot keep calm. Tracking her connection with PR, she has played a pivotal role in bringing the PR consultancies of India under one umbrella. As the Secretary General of PRCAI, we know that she is extremely passionate about her role and responsibilities. A graduate of Calcutta University (Geography Hons), she spent 18 years working for Xerox India and retired in 2005 when she joined PRCAI. The PR community came together to record their reminiscences and memorable experiences with her – as a special tribute to the lady. So, here it goes…

“When I first met Jayoti I was a chapter head, I knew very little about her other than her secretarial role at the PRCAI. What I saw in her then was absolute honesty and someone extremely careful about finances, knowing that every penny spent had to be earned back – a tough task given the size of the association and the business then,” says Sharif D Rangnekar, a communications consultant, former journalist and human rights activist. Incidentally he is the ex-CEO and ex-chairman of Integral PR, and he also was the Chairperson and President of the Public Relations Consultants Association of India. Jayoti’s caution and thoughts about sustaining the association, forced better planning and more judicious decisions and, in a way, helped in building what the association is today, he recalls.

Nitin Mantri, Co-founder and Group CEO, Avian WE says, “I first met Jayoti in 2009-10 I think, and I was struck by her vivacity, humour and warmth”. Nitin is also President of Public Relations Consultants Association of India (PRCAI).

It was way back in 2005 that Prema Sagar, CEO & Founder of Genesis BCW remembers meeting Jayoti – in fact, she happened to get her into PRCAI. Prema recalls always feeling reassured around her, that she had things under control and organised.

PRCAI is something that is invariably linked to Jayoti. Valerie Pinto, Chief Executive Officer at Weber Shandwick India remembers when Jayoti called her to be part of PRCAI, she was the “sweetest and most patient in her approach yet all excited to do a job that could seem so mundane”. What impressed her was how Jayoti kept up the spirit at her age and till date continues to strive for perfection. “I wanted to thank her for doing this job even before I ever met her”, she says.

In life we meet many people, and come across many memorable moments that remain transfixed in our memory. There are good times and bad times, but each time it opens up a new rule of life.

Thinking back on his interaction with Jayoti, Sharif feels that during his tenure as President, Jayoti became more of a partner in the initiatives of PRCAI and later a friend, with whom he shared jokes, spending late hours responding to emails and planning events. She had a clear aspiration to create new milestones to take PRCAI to greater heights. Her persistence, energy and desire to grow the association belied her age and often left him in awe of her. “And even today, at the age of 80, there is a freshness and youthfulness about her! It is very hard to imagine a PRCAI without Jayoti and I am sure for her, a life without PRCAI is unimaginable,” he adds. Well, he definitely cannot forget the day they saw the first SABRE Awards happen in India: both of them were standing next to the console – her eyes sparkling as she said ‘We did it, the place is full, and we had to turn people away’! The selfless delight and the selfishness to succeed for PRCAI makes Jayoti who she is.

“No matter what the situation, you would always find her smiling,” says Prema. I have always found her gracious and elegant, says Atul Ahluwalia, Founding Partner of First Partners and recalls that his most memorable moments with Jayoti were during the time he was Chairman of the Constitutional and Advisory Committee of PRCAI, when he was updating the PRCAI Constitution. What struck him was – her “commitment to her role”.

Professionally we come across many people. Every person is different, some have amazing capabilities … it all depends on how he or she chooses to express his/her personality, which does make them stand out. How does Jayoti find her spotlight? Her friends had different things to say.

Her tenaciousness is what stands out, reveals Nitin; her indomitable spirit and boundless energy enables her to achieve outstanding results in all her work. That she is totally genuine is what impresses Madan Bahal, Managing Director, Adfactors PR as he goes on to say – “The second part is her sincerity and enthusiasm with which she pursues her work even at this age.” Jayoti is someone you can always rely on to help you, to take care of things; she is simple and straightforward, no fuss! – observes Prema.

Always spotted in dignified Indian traditional attire, looking elegant as ever is something that Valerie asserts, which makes Jayoti different; her enthusiasm and love for what she does, is also something that is striking about her. Atul pinpoints that it is her “warmth” that sets her apart. Even when Jayoti complains she makes it sound like a compliment, he exclaims.

We have seen in the world of media, that when a brand owns a word in consumers’ minds, that brand gets effectively positioned. What is that one word that comes to mind when you think of Jayoti? We got some interesting answers here.

So, it goes without saying, Jayoti is surrounded by affection. Building a web of affection is, one of the hardest goals to achieve in life and full marks to Jayoti for having built and nurtured this so well. Three cheers!

Be the first to comment on "Cheers to Jayoti Lahiri!"