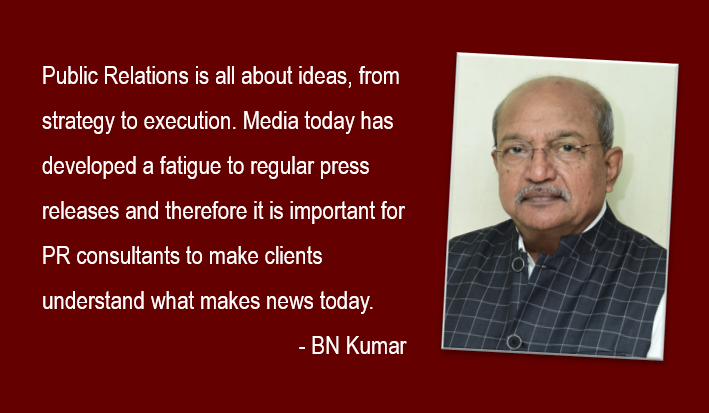 Gone are the days when PR could function with a straight Press Release or announcement and the corporates would remain happy. Today, media has developed fatigue to Press Releases. PR consultants face increasing challenges in getting media clippings. Anything and everything goes out in Press Releases and the tendency is to expect coverage in big newspapers. Everybody wants (coverage in) Times of India and ET. Clients often ask consultants and PR firms: “why are we paying you (so much!), if you can’t get my press release published.” A PR firm’s or consultant’s job, therefore, is to make their clients understand what makes news. Man bites dog is no more the news. Man bites snake and snake dies is also old.

The definition of the NEWS used to be akin to the weathercock. It became part of the history before the World War-I ended. I keep telling my clients during media familiarisation sessions that what is new makes The News or plural of new is news (with apologies to Wren & Martin)!

So, my dear fellow consultants and corporate communication professionals, we have to keep finding something new when we approach media friends.

During my campaign to protect mangroves in Mumbai Metropolitan Region (MMR), a TV journalist doing her fifth story told me: This should be the last story, I guess…unless you discover something new. It’s not difficult to understand what is new and what makes the news.

Sample this simple example: If I tell you, the face of the new government will be known on May 23, you will ask me what’s new about it. Right? So ask yourself what’s new before you gun for media coverage. And sit with your clients and bosses to understand a new aspect. Else, your press release would end up as an FYI note with no information in it!

During my initial days of PR, we could see the size of wastepaper baskets increasing from plastic buckets to huge bathroom drums (which we would otherwise use to store water as concept of loft tanks did not exist). Today, in paperless communication era, you have the option of select-all –> delete.

The same principle could be applied to any media announcement – even through a press conference or one-on-one meets. For journalists, their newspaper, magazine or TV news bulletin is their product and their readers or viewers are their consumers. Hence, as a reader or viewer, you always looks for something new, interesting and not a promo, even if it is a political story. You as a media consumer do not like to be bombarded with promo material, right? You exercise the right to use your remote.

Once you and your clients/bosses understand this, you would not like to bombard the media with irrelevant content. Now you know what’s new and what makes the media take a look at your content. Would you like to read or hear about an XYZ company getting an ISO certification or winning an award? So why expect your announcement on similar developments to be covered by the media!

Awards do not make news anymore as every media house has its own sets of awards. And there is no cross coverage. Simply put, The Indian Express does not cover Filmfare Awards; The Times of India does not report about Screen Awards. So, only an exemplary or unusual award gets covered in media – not necessarily across the board.

During the recent 13th Global Communication organised by PRCI at Jaipur, the theme was: PR – What’s the big idea; and the conclusion at the end of two days of deliberations was: PR is a big idea!

What an idea, sir ji, is applicable to even social media since your tweets or FB posts have to be new to get eyeballs and shares. I had the privilege of starting my PR career under Dhirubhai Ambani and his words still echo in my ears:

Be the first to comment on "What an idea Sir Ji!"