Knowledge Factory is a platform for young professionals to meet over a meaningful experience. It is an avenue for knowledge exchange through a fun and interesting way. The tagline Mind. Mischief. More is about serious fun. It leaves a lot to the imagination because the Factory is an open canvas. Much of what happens on the day is open to interpretation. Through the one-day festival of Knowledge, Insights and Trivia delivered by way of talks and quiz, experts are assembled to throw light on unconventional topics. This stands out to be a unique gathering of thinking Indians.

I got the opportunity this year to co-curate Knowledge Factory and it was a phenomenal learning journey, I thought I should write about my experience with this event. This year, it was on a Saturday on 9th February at The Taj Westend in Bengaluru and there was a diverse set of speakers and topics that explored a range of ideas.

In the age of targeted audiences and focus groups and hyper-concentration, its good to de-focus and explore diversity in learning and knowledge and this world needs more content that is exploratory. When you are exposed to different ideas and subjects that aren’t just part of your core and what you do, it broadens your mind and gives you perspective. It helps you understand and absorb more, and that exposure will always come to inspire or help you to add more value in the things you do in future.

A lot of people wanted to know what the theme was and the answer to that is – Knowledge. Knowledge is a broad-spectrum approach and everything that you imbibe as knowledge adds personality and character so sometimes a broad-based approach is a great way to get out of your comfort zone and explore what the rest of the world has to offer.

Here are some of my takeaways from the sessions …

OUR CITIES, OUR RIVERS: REIMAGINING THE RELATIONSHIP 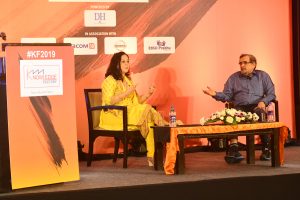 This session was all about the environment and our relationship with water and the way we understand waterbodies and their role and their current state in our cities. This session discussed how and what the life choices we make everyday in our cities can impact the most valuable resource that we have. It touched upon the sugarcane economy and how what we eat also impacts water and how switching to millets can reduce water consumption. 80% of our water goes into agriculture and conscious eating can really help save water. Dr Mihir spoke about how we can save these water bodies and what we can do as local communities to engage in the conversations and create a positive impact. The conversation touched upon how community involvement can truly impact public policy and change the status quo. It ended on a poetic note with Ms. Rohini speaking in context of Bangalore asking us to imagine this city with two rivers and all its lakes in full glory.

PARENTING CHALLENGES IN THE DIGITAL AGE 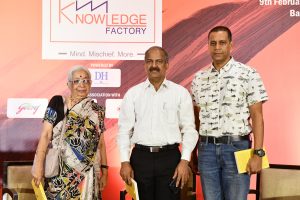 This session addressed a very crucial topic. As we navigate the digital age, what do we do with screen time and gadget time for our kids as parents. How do we ensure that we strike a balance and protect children from all the problems that could arise with the overuse of gadgets? Prof Malavika discussed the alternatives to screen time and spoke about how one thing and one change a day can go a long way. One story, one hug, one activity introduced everyday can help reduce the time spent on screens. Mr. Sebastian spoke about the lesser known evils and threats associated with gadget use and how children can be subject to online abuse and how in some cases children have been trapped and even kidnapped by strangers who get access to them via the internet. He spoke about how you can never really tell who is behind the keyboard on the other side. Mr Samar quoted real life examples of how he tries to ensure he is there in the evenings to spend time doing different activities with his daughter and how engaging directly with the child and spending time with them is beneficial to both parent and child. 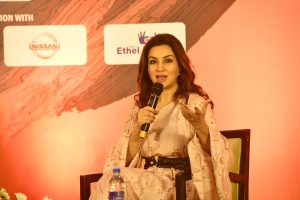 Tisca is someone who came from outside the film industry and explored diverse roles and played real characters etched out of life. She said the nepotism conversation gets unnecessarily blown out of proportion and that it’s only natural for families to back their family or friends to get into the industry if they wanted to. She also touched upon the #metoo campaign and said that she has had instances where she walked away from projects as she was unwilling to relent. She also feels listening to both sides is important and that it was about time that this conversation happened. She also spoke about how fame is like a drug and she narrated incidents that made her realise that the world of cinema and Bollywood is a bubble, and nothing lasts forever. She said that she’s learnt not to take the euphoria or the downs too seriously. Multiple industries and how working with each was different was another topic that she discussed and said she is looking forward to her web series that is coming up next. 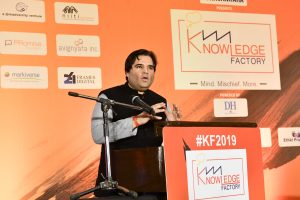 Varun spoke about the need for civic and electoral reforms. He said that there was a necessity to bring in transparency into election funding. He cited data references that show that 80% of times the richest candidate in a constituency wins and 100% of the time the poorest candidate loses.

He stressed on the need for healthier debates in parliament in context of passing bills. He also said that the parliament library is a lonely place because hardly anyone goes there and spoke about how MP’s need to spend more time researching their projects. He said that over 70% of bills get passed without any solid debate based on content and said that some budgets should be set aside for research. He felt that elected members need to be held accountable for their programmes and talked about his own programmes in Sultanpur and Philibhit where he spends a lot of time planning projects with clear outlines and timelines and reviews them regularly.

He spoke about his book A Rural Manifesto which is a deeply researched document which he wrote based on personal experiences and hoped for a more participatory action from citizens as that is how real development can be achieved.

OF DECCAN AND DAKHANI: HOW ISLAM AND HINDUISM INFLUENCED EACH OTHER 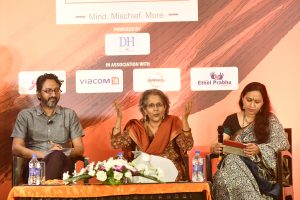 Steeped in history and full of cultural nuance and the magic of how language can influence exchange in so many forms and transgress all boundaries and how two religions can seamlessly influence each other, this was a session that touched upon aspects of this subject that were new and unexplored.

This session brought out a lot of similarities in the Deccan rulers and the political leadership of today. How the lust for power changed the course of several rulers and their lives was discussed. A special reference was made to rulers like Chand Bibi and then the poet Chand Bibi. The former was unapologetic about the power she wielded and was for this reason called Sultan by her enemies and perhaps assassinated for the same reason.

The conversation also explored the influence of Hindu faith in Muslim rulers which was evident as singers like Malakha Bai used to compose Ganapati couplets and rulers like Ibrahim have been known to pray in a temple. There was also reference to the Deccan origins of Urdu.

Moderated by Ms. Ratna, the session had passage readings from Manu. S. Pillai’s book, Rebel Sultans – The Deccan from Khilji to Shivaji and Gautam Pemmaraju’s recent documentary, A Tongue Untied – the story of Dhakani and renditions of Dhakani compositions by Vidya Shah.

MUSIC IN THE BLACK & WHITE ERA 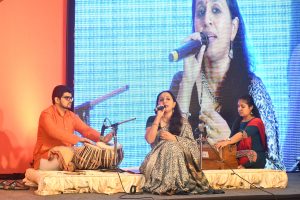 A musical session nestled in nostalgia of the magic of yester years combined with the power of stories of how music evolved over the times of the black and white era with songs that beautifully took you back in time.

Vidya in her session talked about how women in the early 1900’s were at the forefront of recorded music. From the time the first recorded music of 1902 by Gauharjan, for many years the recorded music industry was dominated by women and this was mainly because the male Ustads felt that this was a means to commercialise their art form.

She narrated stories of how the first recorders were wax cylinders and how the history of technology changes and innovation brought new singers to the fore. She also talked about the various genres of recorded music that was popular in the black and white era from the Thumris and Dadras to the faster paced English laced lyrical songs that appealed to the audiences.

PRINCIPLES FOR SUCCESS IN CAREERS 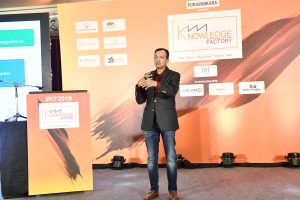 Chandramouli spoke about the influence of life and work on each other and how life impacts work more than work impacts life. He stressed on the need for reflection as a necessary driver of self-improvement. He urged young professionals to switch jobs only if they felt they had outgrown their current role and not because something on the outside was appearing more lucrative.

He also shared that in his experience people who played team sports were far better at managing teams and therefore had the capacity to succeed more in comparison to those that didn’t.

In closing was the science and tech quiz by Quiz Master – Gaurava Yadav, Founder & CEO, EduAce Services who navigated the super smart teams and kept the teams and the audience engaged with fantastic questions. The audience also got turns to answer and won goodies too.

A day spent steeped in learning and absorbing knowledge didn’t need any focus area. Here I am going back enriched with stories and anecdotes, insights and trivia across a range of topics.

Leadership isn’t just about doing things at work or playing a certain role. It’s about exploring and going out and listening to people and trying different approaches to learning and Knowledge Factory was a way to get people inspired by ideas and topics that give them a view that they wouldn’t get otherwise from another platform.

Word of mouth and social influence

It all came rushing back