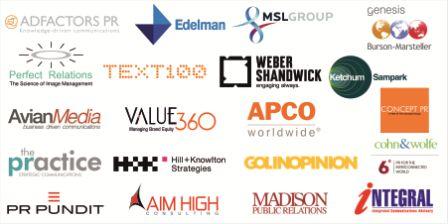 India has seen Public Relations consulting evolve in the last two decades. Several large firms are celebrating their silver jubilees this year. Many of the firms mushroomed in the early to mid-90s and over a dozen got acquired by the global biggies. There has been no information publicly available of the largest firms in India by revenue. As we start a new year we take the first step in presenting the list of the biggest firms by revenue size. It’s 2017 so we have listed the 17 biggest firms. The figures in brackets for the first five firms are approximate revenues of firms as of December, 31st 2016 based on the financial year that ended in March or June 2016 as some firms follow the financial calendar of their parent company. We are happy to make corrections to the revenue figures if we receive sufficient proof in the form of a balance sheet signed by a chartered accountant stating we were greatly off the mark.

Together the 17 firms listed here make about INR 650 cr with the number one firm having 20% of the share. This is 2/3 of the organised PR business. The next set of 33 firms together would contribute another 200 crore at an average of INR 6 crore each. The final set of the 50 very small firms at an average of INR 3 crore will take the structured Indian PR consulting business to about INR 1000 crore. Over and above these, there are numerous one person PR firms that could be anywhere between 200 to 300 in number that make between INR 1 and 2 crore per annum that could peg the total business at about INR 1300 crore. However, PRCAI recently released a report which pegged the consulting business at INR 1100 crore and we would agree with that figure for uniformity.

We have divided them into four categories:

Adfactors – Adfactors is less than twenty years old and was an offshoot of the ad agency that Rajesh Chaturvedi and Madan Bahal created in 1980. In 2016 it crossed INR 125-crore in revenue and remains the only Indian consultancy in the Top 100 PR firms in the world. It has been on an award-winning spree in India and globally.

Edelman India – Edelman India is close to becoming a INR 100-crore firm along with sister brand Zeno. It completed five years after it won the Tata Group mandate. The India operations are led by Rakesh Thukral who is ably supported by Amit Narayan and Kunal Arora who is steering a digital powerhouse.

MSLGROUP India – This firm has grown out of the shadows of the erstwhile Hanmer and 20 20 media founders. Under Amit Misra’s leadership the firm with three brands including 2020 MSL and Publicis Consultants has made great strides to ensure it gets into the Top 3 Indian firms in a short span. Also, one of four firms that is in the $10 million club.

Genesis Burson Marsteller – Once upon a time this was India’s number one firm and has maintained steady growth. The Prema Sagar and Nikhil Dey led firm has been a pioneer in several ways. Be it the verified twitter handle, the state of the art newsroom, the signature ALP, GBM has led the way and now in the 25th year. It recently included WPP firm PPR.

Perfect Relations – Dilip Cherian and Bobby Kewalramani recently sold the firm they founded in 1992 to the Dentsu Aegies Network. The company has had some iconic brands as clients and is a leader in political communication. It is known for its several sister brands including Buzz, Imprimis and Accord. They have a major focus on government connected mandates.

Text100 India – This firm was established in 1996 in India and has always been considered a great place to work. Sunayna Malik does a brilliant job of leading her team of smart young men and women to service some very large technology brands.

Weber Shandwick India – Originally known as Corporate Voice, the firm is now led by one of the youngest CEOs of a Top 10 firms and includes sister brand Creation. Under Valerie Pinto’s leadership over the last two years, this world number two firm has continued its winning streak at various award nights.

Ketchum Sampark – Another firm that celebrates its silver jubilee soon, the husband-wide duo of NS and Bela Rajan have ensured the company they built together remains a formidable player in the Indian communications space with several legacy clients.

Avian Media – Nikhil Khanna and Nitin Mantri have built a well-respected firm in the last decade with a passionate focus on a handful of sectors. This is the frontrunner to be acquired in the near future as several large PR firms have been in talks with them for a while.

Value 360 – This is the upstart and the champion of start-ups. They have been the PR firm of choice for several Indian unicorns, especially Paytm and Shopclues. The firm set up by Gaurav Patra, Kunal Sinha and Manisha Chaudhary have very quickly made it to the big league.

The PRactice – The firm Nandita Lakshmanan built in the early 2000’s with flagship clients like Infosys, among others is now being steered by Vivek Rana and is an affiliate of Porter Novelli. This was the first Indian PR firm to find its way into a Cannes shortlist way back in 2012.

APCO Worldwide India – This may seem like a dark horse in this list but this boutique firm completes a decade in India. After a shaky start, it has stabilised under the tutelage of Sukanti Ghosh who took up the challenge of rebuilding the company using innovative ways.

Concept – With Vivek Suchanti, Ashish Jalan and BN Kumar at the helm, this firm is taking the shape of a holding company and building a larger network of brands. The firm is known to be an IPO specialist and is a powerhouse in India’s financial capital.

H+K Strategies India – 2017 will witness a leadership change at this consultancy which was once called IPAN, then a pioneer of public affairs. With Chetan Mahajan taking over from Radhika Shapoorjee, it is certainly going to see interesting times and bet big on the future.

Golinopinion – Ameer Ismail is perhaps the longest serving employee of any Indian PR firm and has led this IPG firm with style. He has led the various avatars of what was once called Linopinion and is supported by Kavita Lakhani and Lavang Khare in driving Fred Cook’s vision for India.

Cohn & Wolfe Six Degrees – Rishi Seth and Zacharia James have built this company quietly and steadily winning some big clients along the way including Google and part of PepsiCo India. They were last of the new age firms to be acquired by WPP in 2015 and have a bright road ahead.

PR Pundit – This Luxury Lifestyle PR specialist has been spearheaded by Archana Jain and her swarm of bees, as the leadership of this firm are better known. When iconic global brands in the lifestyle space choose to launch in India they choose this firm as their preferred partner. Not to suggest that they do not address corporate communication mandates.

Aim High Consulting – This Bangalore headquartered firm has focused on start-ups and new age businesses capitalising on the tech revolution in India’s garden city. The firm is led by Ravi Shankar and Gopinath who are thought leaders in their own right who only work on long term retainers.

Madison Public Relations – Madison has evolved in the last couple of years to fast paced growth under the tutelage of Paresh Chaudhry who made the rare shift from in-house to a consultancy. They are one of the only PR firms in India owned by a media buying and planning parent.

We  will write about the next 30 firms later in the year to take this rolling list upto 50. Hope you enjoyed reading this piece. This was written purely for academic purposes and we are happy to be corrected.

PS 1 – After the article was published we received a request from one company which was on the border of large and very large. They clarified that they are above 20 cr in revenue. We have moved them from large to very large.

PS 2 – We mentioned that there were three firms that were just under INR 10 crore. However, we heard from these firms after we published the column that they had indeed crossed the INR 10 crore mark and we have added them to the list of the biggest firms above taking the list to 20.

When we do a similar column next we will request all firms listed in this article to submit to us a chartered accountant certified balance sheet and wherever applicable the break up between Public Relations consulting fees and other fees derived from allied services.

The Start-Up story in India; and What PR Does to it!

The power of visualisation

Six ways to complete the most mundane work tasks