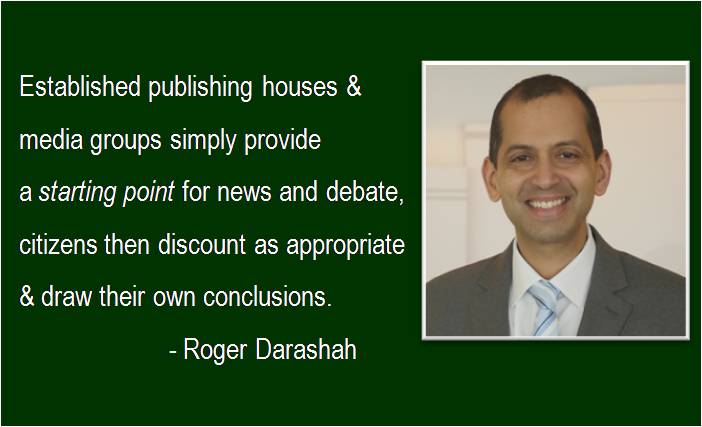 The paraphrase – and adapt – Mark Twain, tales of the death of the media have been greatly exaggerated. Beyond North America and Europe, journalism, newspapers (whether traditional or online) remain in rude health; particularly across emerging markets, which account for 80% of the World’s population.

Across Asia and Latin America, for instance, according to the Reuters Institute between 2009 and 2014 newspaper circulation rose 32.7% in Asia, 3.7% in the Middle East and Africa and around 3% in Latin America; while it fell 8.8% in North America; 21.3% in Europe and 22.3% in Australia and Oceania.

From the same report, 22% Brazilians subscribed to paid editorial sites in 2014; today, in Chile, 78.4% of the adult population still read print media; compared to 19.3% who read via a PC or laptop.  Across India, print circulation actually continues to prosper; last year India’s newspaper industry grew by 8%; between 2010 to 2014 advertising revenues from newspapers in India rose by 40%.

The recent US presidential elections were notable for a disintermediation of journalists – citizens and consumers engaged directly with politicians, organisations and other brands looking to influence them – particularly from the Republican side where Donald Trump’s Twitter handle became a media in its own right. But this phenomenon has yet to spread to emerging markets to the same degree. This is due in part to the limited Web coverage beyond cities, to the varying range of social and educational profiles of its citizens, and to the regard in which journalists are held in Asia and Latin America. Journalism is considered a prestigious profession in India, for instance, conferring levels of integrity and respect on its practitioners. Mahatma Gandhi himself began his career as a journalist.

My experience of Brazil confirmed that – even with a deeply polarised media – newspapers and, especially, television, continued to represent the principle source of information. The principle media houses in Brazil are notoriously (and overtly) partisan; socialist politicians (from Partido Trabalhador) are systematically pursued with more rigour, than their establishment counterparts. That the corruption scandals – from Mensalão to Lava Jato– involve parties and politicians from all sides, makes the partisan distinction harder to spot, but it is always present. Brazilians simply ‘discount’ the bias when consuming the media; it’s as if they are able to instinctively ‘unspin’ the news in real time, and reach their own view of the world. The level of discounting varies according to the print media or news channel; but it is based on the assumption of some element of veracity in the report.  The phenomenon of completely ‘fake news’ had yet to reach Brazil when I left in September 2016.

In this context, established publishing houses and media groups simply provide a starting point for news and debate; a form of minimal credibility level.  Consumers and citizens then discount as appropriate and draw their own conclusions.

The emergence of ‘fake news’, baseless ‘facts’ and political debates based on the same actually renders the journalist’s role – even for the most partisan journalist – even more critical.  Media houses, newspapers, broadcasters, and reputable journalists are ultimately accountable; they are subject to laws and compliance, they adhere to a (self-defined) editorial code, they are answerable for their actions; ultimately, to their advertisers.  If they lose the trust and interest of their audiences, market forces will ultimately oblige them to recalibrate.  This balance can be mitigated in the case of politically or business-controlled publishers, but the power of the market should not be underestimated; in a democratic society, media which fails to deliver even a minimal level of veracity will struggle to survive.

This year, the importance of the ‘intermediary’ (the journalist or other), to validate and verify news has really been highlighted. Following the US election, Facebook is undertaking to assume that role through independent fact checkers; but it’s difficult to see how this approach could be wholly objective.

My take is that in the US and Europe the pendulum will return, from ‘hard disintermediation’, where journalists are questioning their very role and relevance, towards a more emerging market model where reputable media plays a role as ‘first validator’ of news.

I appreciate that so-called developed societies learning from and adopting practices from their emerging counterparts may appear counter-intuitive; but with fake news and post truthism appearing as distinctly European and US phenomena, this form of ‘reverse mentoring’ may not be so absurd after all.

Is Instagram the answer to the decline in book readership?