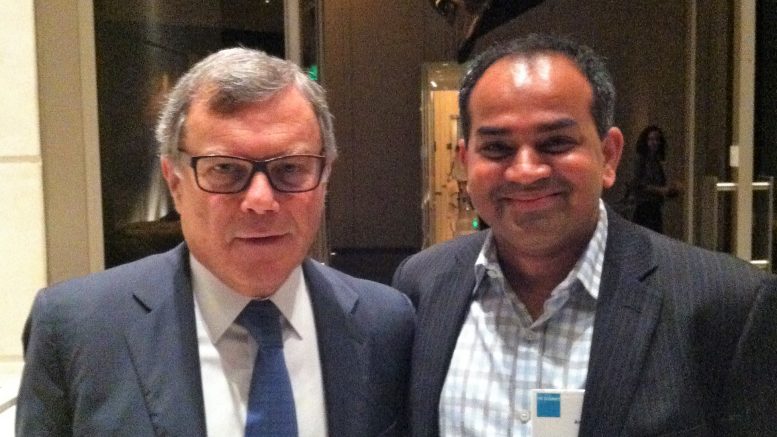 Starting today life at a WPP company will not be the same. There are close to 1000 PR professionals who work for a WPP-owned PR firm in India that include Genesis BM, Cohn & Wolfe Six Degrees, HK Strategies, Ogilvy Public Relations and PPR.

The abrupt exit of Sir Martin Sorrell may not impact employees in the short term but some of the leaders including Prema Sagar will certainly feel the loss. This is in some ways is the equivalent of Mukesh Ambani quitting Reliance Group. This will start having bearing on some clients on whom the founder of the group had an iron grip for the last three decades. Ford, Colgate Palmolive are just some of the clients that WPP ran global multi-disciplinary mandates for. They will certainly become vulnerable.

What is baffling is that how a man of Sir Martin Sorrell’s stature could get embroiled in a controversy, of which the group claims he was absolved but there always remains a doubt. This is his style of catching everyone by surprise like it was done a few weeks ago when the Burson Marsteller and Cohn & Wolfe merger was announced. But this was not done well.

With the best PR advisors in the world at his beck and call, the right way to do it would have been to announce that the investigation was complete and then after a week announce the so-called retirement. But, this was meant to be. My personal favourite for the hot seat is CVL Srinivas who is currently WPP’s country head for India. But on expected lines they will choose a Brit or an American for this position.

Well, Sir Martin Sorrell was the most outspoken and flamboyant of the six holding group CEOs. I was fortunate to watch him and the luckiest woman from WPP in a candid conversation at the Global PR Summit in Miami in 2012. He was in his elements. At the end of the fire-side chat as he was exiting I made sure I met him at the elevator lobby and walked with him right upto his car. Three things happened in our three-minute conversation. He asked me what I was doing, and I told him I had just completed a tenure at an independent PR firm in Chicago and was returning to India to explore options. His jocular retort was that I was wasting time at an independent firm and that I should head to India and meet Prema Sagar and work with her. He then gave me his business card which I have preserved. It had some numbers scribbled on the reverse. He also let me take a picture of both him and me together. I am sure WPP will get over this phase and find a worthy successor in due course.

But, the going will certainly not be easy as what they had was a statesman at the helm who built the concept of the holding group through hostile takeovers. The world of marketing communications will wait and watch what Sir Martin Sorrell does next and who succeeds him.

How will the Burson-Marsteller and Cohn & Wolfe merger pan out in India?

Productivity in meetings- the quintessential for 2020 and beyond!