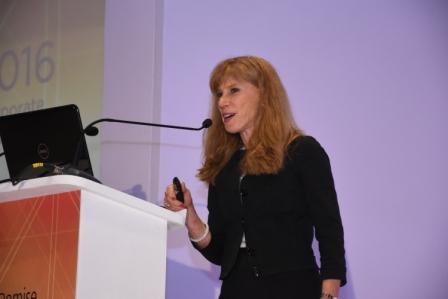 Observing that #PRAXIS5 was trending even before the event, Kathy Bloomgarden, Global CEO, Ruder Finn began her address by asking the audience gathered there to think about the world we are living in today and the role PR is playing in this Digital Age.  What does this mean? Her answer was clear: it means complete disruption of every business model, including our own.

Arguing that “the way companies can be successful is through communication, which will play a central role in a way that it has not played in the past”, she pointed out that this is a great opportunity for the PR business to make a difference!

Highlighting some major changes, she focused on the fact that transportation has changed. “In New York, even if I have a taxi in front of me, I’ll call Uber. It’s totally changed my life!” she pointed out and went on to say that innovation and change in the transportation sector will continue to disrupt.

The next point was – connected living. Our smart houses are going to change our lives – futuristic things that we as kids saw on TV are now happening for real. But, at the same time, we have tremendous fears. “Brazil’s economy has shrunk for several quarters and China has slowed down. We cannot look for salvation from emerging markets, as we once thought,” was her advice.

BREXIT shocked the markets and brought with it many changes. “Who would have thought that UK would vote themselves out of EU? And, the incredible impact, we have yet to see,” she said. Another glaring factor is terrorism in every community; it scared tourists out of Europe, and it’s something we have to live with. “Then what can I say about American politics?” she explained. It’s between two candidates, whose unpopularity for each is greater than we have ever seen!

Looking at disruption, one can see that the technologies – internet, social, cloud, analytics – all are part of our world and will impact the way we operate as a business. We have to figure out how we are to take advantage of all this. We are at the 5th Wave of innovation and disruption, which will be more profound and faster than we have seen before, she warned.

People hypothesise that in the next 10 years, we will, see more innovation than we have seen in the previous 100 years; many people state that 1/3 or 40% of companies will go out of business or will not be relevant. This is huge impact! The survival of companies and their success regardless of where they stand in the journey of innovation, she said will depend on – ‘the reputation of the fittest’. The scene in “Survival of the Reputational Fittest” is – Disruptor VS Challenger VS Transformer Brands.

She strongly urged everyone, as communication people, to make sure that your companies can continue in this strategic journey that is constantly changing.

Elaborating on the trio circle, she said,

The challenges ahead are: the fight between disrupter, challenger and transformer brands is decided by how well the brands build their reputation in each category. Reputation can be moved by marketplace transitions and the role of communications is to keep companies on their strategic path.

Industry-transcending vision is seen in GE as they focused on reinventing themselves and created an industrial platform – which was a powerful vision and it carries through in everything they do. Bold, uncompromising leadership is clear in Jeff Bezos. It’s his drive to push the boundaries of what’s possible that have helped Amazon gain — and maintain — its reign as the largest and most successful Internet retail company in the world. Apple revealed the culture of continuous innovation, and revolutionary customer experience is visible in a company called Zappos which taught us about creating the “ultimate client experience”, according to Forbes. Inspiring the industry ecosystem was clear in auto giants like Tesla and BMW who moved in as disruptors after experiencing bumps in the road; partnerships with leapfrog potential can be seen in the Novartis Google lens, where biology meets bioelectronics; commitment to the social agenda is seen in social networks’ struggle as they become media entities – here she referred to Facebook where ISIS had used Facebook to recruit terrorists and expressed that Facebook will have to recognise their role in terms of values and social commitment. Netflix is a perfect example of igniting employee passion and engagement as they treat employees as grown-ups; when Airbnb took its most forceful actions yet to combat discrimination, it was a shining example of community commitment. When Travis K announced Uber had set up association for drivers in New York that would establish a forum for regular dialogue, afford them benefits and protections is an eye-opener to how crisis could be managed and how to dampen potential fires

Brands beyond the logo: Part 3 – Brands and scents

At Davos, all roads led to Delhi