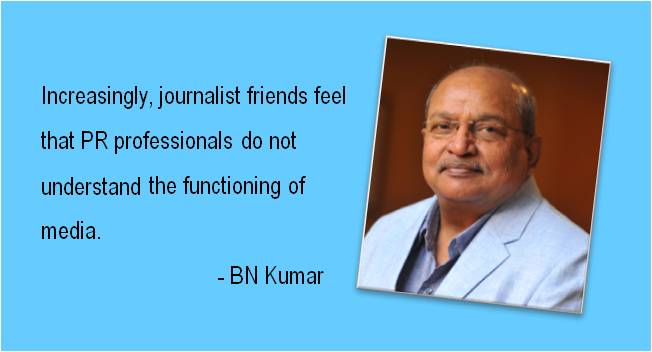 “I do not need to attend workshops on press release writing,” said the vice president of a PR firm when she was told that she missed a training session. She obviously ignored the unwritten dictum that the process of learning never ends.

Then we often come across senior PR professionals writing essays for Press Releases! Their argument is: Let journalists write what and how they want, we only provide facts. This where all these PR professionals are wrong, totally.

Everybody talks about it and nobody does anything about it. Similarly, all talk about being media-friendly and conveniently ignore the need to practice what they preach or believe. Being media-friendly is not just about making friends among journalists. It goes beyond – to the extent of giving them information that they can readily use.

Imagine this: You go to an Udupi restaurant to have a Masala Dosa. The waiter first brings you water, then some chutney followed by sambaar and ultimately the Dosa after some five minutes. How do you react? You turn furious with the waiter for delaying the most important thing, the Dosa, as you can’t consume chutney or sambaar in isolation.

A journalist who receives an essay for a press release feels the same – gets frustrated as you have hidden the most important part of the release somewhere down below while getting into irrelevant description which you think is colourful.

When you write about a cow, nobody is interested in reading that “Cow is a domestic animal. It four legs, one tail….” What the reader likes to know is what is happening to that cow.

“Mr Modi led BJP to a thumping victory in the last Lok Sabha election. Earlier, he was the Gujarat Chief Minister where he launched several reforms. Last week he was in the United States and later he visited Israel.

I appreciate the fact that not many among PR professionals would have a journalistic background. But it does not prevent us from learning. It’s not rocket science. Now let me reveal a state secret!

Please keep a watch on media reports based on your “Press Releases”. Unless it is a paid press release site, most publications change it into readable reports. Just have a look at them and compare with your release. Keep doing this for some time, and I am sure, over a period, you will understand what the media needs.

Journalists always appreciate ready-to-use material since they do not have to waste much time in trying to understand what the release wants to convey and then rewriting it to suit his or her publication.

Some corporates seem to have their own style of writing press releases. For instance, a large company fills up two A-4 pages with bullet points and tables while announcing its unaudited results which the media gets anyway from the stock exchanges. The corporate communication teams of such companies refuse to look into the reality and make a journalist’s life happy with straight, simple sentences and facts.

Style is something that can be internal and of course anything. Your logo, your stationery, your house journal and your internal and even external mails can have a particular style. But your press releases should be styled to suit media needs. Create a release template, based on what the media carries, and make it your style. Simple, right?

Let me divulge another secret here! Please follow the story filing style of news wires like PTI, IANS, Reuters and Bloomberg for making your press releases. Newspapers generally accept what the wires dish out.

Don’t we PR professionals talk about target groups or audiences while making presentations? When you make a press release, your TG goes beyond the media. It’s the reader who matters most. In fact, many journalists do ask ‘what’s in it for my reader’ when you approach them with a story idea.

Finally, as I keep saying in my media familiarisation workshops, please give media what you would like to read about others. Do you like to read platitudes or about your competition? Then why pack your press releases with adjectives.