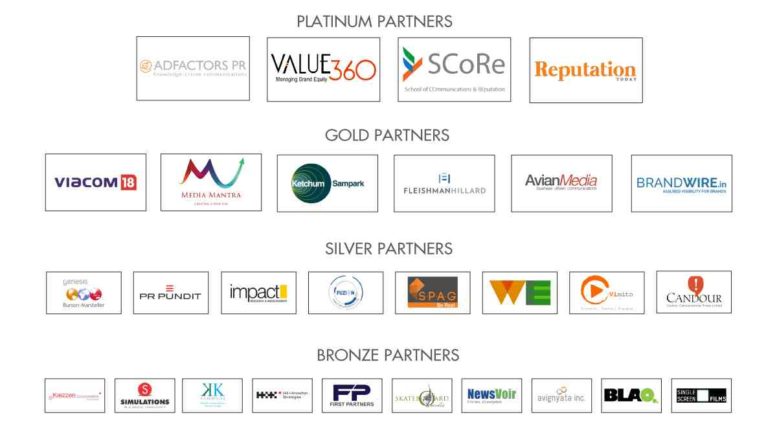 Six to the power of six seems to be the unwritten theme when it comes to partnerships. These include six of the Top 10 firms, two iconic media brands and several young consultancies besides ancillary companies.

India headquartered Adfactors and Value 360 have come forward to be Platinum partners for the third consecutive year. The latter has been supporting the summit since its inception and as part of its 20th year celebration will be a title partner at the event venue. This year we have offered our regular Platinum partners the option on a rotational basis to be a Presenting partner for an additional investment.

Leading Indian firms that are partnering the summit consecutively are Avian Media and Media Mantra as Gold Partners. Silver partners include PR Pundit and SPAG who have supported PRAXIS previously and making their debut are Fuzion PR and Candour. Bronze partners include Simulations (since 2013), First Partners (since 2015), Kaizzen (since 2016) besides first timers Kommune and Skateboard Media.

Among the leading global firms FleishmanHillard (first time) and Ketchum Sampark (third time) are supporting the event as Gold Partners. Genesis Burson-Marsteller and WE Communications are backing the event as Silver Partners. H+K Strategies (fourth time) is a Bronze Partner.

Viacom18 and Brandwire – a new offering from Times Internet are leading media companies who have come on board as Gold Partners. While the former is supporting the live concert, the latter is creating cool bag tags for every delegate who registered before August 31st.

Impact Research and Measurement is our best sponsor forever having been the first organisation to back us up from Day Zero. Additionally, Vimito (a video company), NewsVoir (a wire company) and Heckyl Technologies (an analytics company) are supporting the summit and Fulcrum Awards for the first time. School of Communications & Reputation (SCORE) is the academic partner. The Holmes Report is the global media partner. Reputation Today is the print magazine partner.

Two organisations are supporting us in kind and they have been doing so since the inception – Avignyata as the digital marketing partner and Blaq as the content design partner.

Over and above these 28 organisations there are two companies who have come forward to support the summit and wish to be anonymous. This is generosity of a different level. They believe PRAXIS is a movement and therefore a cause they cannot afford to not support.

We also have six brands that are supporting us in kind. Our biggest partner is Fairmont who has opened its doors to us generously. These include Mobility Partner – Ola which is supporting airport transfers for speakers through Ola Rental, Prize Partner – Panasonic Mobiles which is giving us six handsets for the sixth edition to be given away as prizes to hard working and lucky winners. Pernod Ricard and Coca Cola are offering beverages to all delegates on both days. Wildcraft has given us a great discount on the delegate bags for which we are thankful.

MxM India will cover the event and a special thanks to Single Screen Films for promising to capture the essence of PRAXIS for posterity at cost price.

Leading global firms MSLGROUP, Edelman, (Dentsu) Perfect Relations, Text 100, Weber Shandwick and Golinopinion are sending delegations consisting of team members and their India leadership. Almost all the Top 25 Indian firms will be present in large and small numbers. Some corporates including Biocon, Godrej, Nissan, Turner, Mondelez and Renault have signed up as teams to attend.

All sponsors pay one of our five key vendors directly and this includes the official hotels, the event production company, the band, the printing company and the travel company.

The sixth edition of the summit will witness close to 600 delegates. The theme is The Beauty of Communications – Integration of Content, Creativity and Community.

We remain eternally grateful to our partners and we hope these relationships strengthen year on year.

Are you a complete package or a flash in the pan?

Equal Yet Different Career Catalysts for the Professional Women