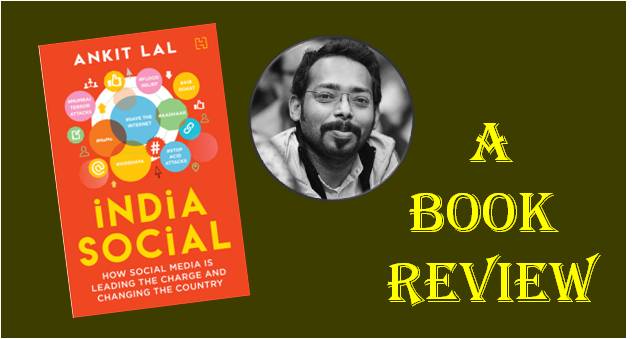 A lot of action has taken place in Indian politics over social media in the last five years. This has been an era of digital communications for politicians. Social networks are being carefully used to build and sustain campaigns. The Narendra Modi campaign of 2014 was nurtured in the preceding years on Social Media. The AAP Revolution was built on Twitter and Facebook. Thankfully, someone has taken the pains to pen down the way things worked in a book. The book is aptly titled India Social and is authored by none other than the young man who drove several social media campaigns for the initiatives led by Arvind Kejriwal.

I was fortunate to be at the book launch and buy my 50th author signed personalised copy. The book was released by Arun Shourie and Arvind Kejriwal. I managed to read the book over two sittings of about two hours each. The book is filled with data, trivia and a lot of interesting facts. It is smartly divided into five sections with a few case studies under each section. There are broadly fifteen case studies. Each of them is well explained so that the common man can appreciate the power of social media. Despite the author being an Aam Aadmi Party loyalist, he has ensured balance and captured the Modi juggernaut in one of the case study.

He goes back to 2008 at the start of the book to talk about the horrific Mumbai terror attack which was the first major national incident that had social media ramifications. He then goes onto dive deep and analyse the three major campaigns he was involved with. First, the India Against Corruption Movement. Then the AAP Ki Delhi for the 2013 Assembly elections after which Kejriwal formed a short-lived government, then he delves upon the second chance the party got and how they used the Muffler Man campaign in an effective way. A chapter is dedicated to the current prime minister and how his social media machinery was unleashed in 2014. The first section ends with a chapter on Political Gaffes on Social Media including references to the incidents involving Shashi Tharoor.

The section on Social Change focuses on the campaigns in support of Nirbhaya and the one on Stop Acid Attacks. Then it moves to a section on Technology which talks about the famous Save The Internet campaign and on Aadhar.

In the section on Natural Disasters the cases are the three great floods that hit India in Uttarakhand, J&K, Chennai and how social media was mobilised to help in relief and rehabilitation. In the final section on Popular Culture the two cases are Kolaveri and AIB.

This would work as a brilliant text book for students of political communication as well as anyone interested in understanding how ordinary people can wield influence. It is written in easy-to-understand language and is a quick read. I would recommend that every Public Relations practitioner reads this book.

2017 – The year of PR and Reputation Management!

It is time to take back control!