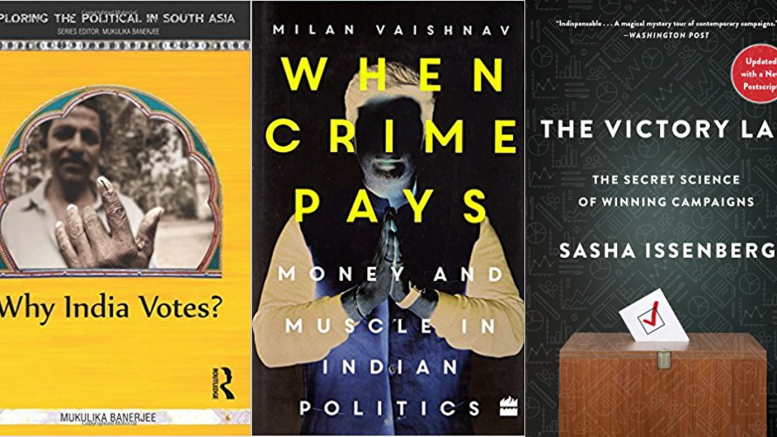 We’re less than a year away from what is set to be the largest elections in the history of mankind. Many of you might passively follow it, some might be actively interested in it. Even fewer still maybe contributing to it in some capacity. If you’re in any of these categories, you’ll find these books on Indian politics worth reading.

In the interest of brevity I’ve kept the description of each book limited to their immediate utility to a political communicator/consultant, and therefore may seem grossly oversimplified. Please take that with a pinch of salt.

I’ve collated these books on Indian politics not so much as recommendations but almost entirely as prescriptions with subsequence – read them all and in this order to get the most out of this list.

This book precedes others in this list as it gives a history of our electoral process. These are the insights that will help a political communicator put things into perspective – especially that of how incredibly diverse and extensive our voting population is and the role of the election commission of India and various bodies commissioned by it. Dr Shani, a senior lecturer in the Department of Asian Studies at the University of Haifa traces the history of universal adult franchise, the ideas and decisions that led up to the eventuality of how “Indians became voters before they were citizens.”

This is an extremely thorough study of “co-existence of crime and politics” in India. I had a chance to meet Dr. Vaishnav at the launch of this hosted by The Aisa Society and one of the examples he took surmises the essence of the book well – of a quintessential flamboyant politician who forward integrated from crime to politics because it just made sense. After analysing decades of records of election filings and other data, Dr. Vaishnav paints a very vivid empirical picture of how intertwined, and almost interdependent is crime (more specifically – criminally acquired wealth) with politics in India. To a political communicator or consultant this will highlight the crucial undercurrents of political decision making, and the invisible moving parts that manifest those decisions into realities of election success metrics.

The first two books illustrate how elections work, and this one takes the story forward from there, to what happens therein. Although the book was released a few months before the 2014 general elections, the science of voting decision it describes is, in my opinion, timeless. It maps out various individual and collective motivations in the context of many ethnographic parameters, and helps, to a great extent, in understanding voter turnouts in urban versus rural India. I personally got a chance to read the book after the 2014 elections but found the insights by Dr. Banerjee, who teaches at London School of Economics, remarkable, especially in that hindsight.

This book came out nearly a year after the largest election that the world has ever seen, and by and large remains the most elaborate and most official account of how Modi’s triumphant journey to the Prime Minister’s office. The book is based on conversations between Price and Modi and many people around him who had a role to play in that journey, along with a chronicle of strategies, environmental characteristics and Modi’s own traits that comprised the BJP’s election campaign. It is a fantastic study of how copious amounts of resources worked together to a single electoral goal.

Strictly speaking, this book isn’t on Indian politics, but based entirely on insights from US elections, this book catalogues perspectives of political academics and campaign consultants. Neverthless this finds a mention in this list because as far as media, internet and information penetration goes, India follows the west by a few years, and therefore this book published in 2012 is fairly relevant in the Indian context today. The biggest takeaway from the book is how behavioural psychology combines with data to reveal frighteningly impressive insights on voter decision making. Some experiments described in the book illustrate how it is possible to predict where an individual would vote before that individual knows it; almost as a precursor to the systems that Cambridge Analytica will go on to claim to have designed. The reason why I suggest to read this book after the others is simple – the insights from this book are highly practical and readily applicable, as far as running a campaign is concerned (I felt this can be an abiding guide for get out the vote campaigns).

These are amongst the books that I have read in the last few years. On my reading list from this genre awaits The Free Voice by Ravish Kumar, which, going by its reviews that I have read, would probably be a good addition to this list.

Any other book that you would recommend? Is there a fiction book on Indian politics that is a must read? Let me know in the comments below.

Prepping for a media interaction

How to enhance Employee Engagement?