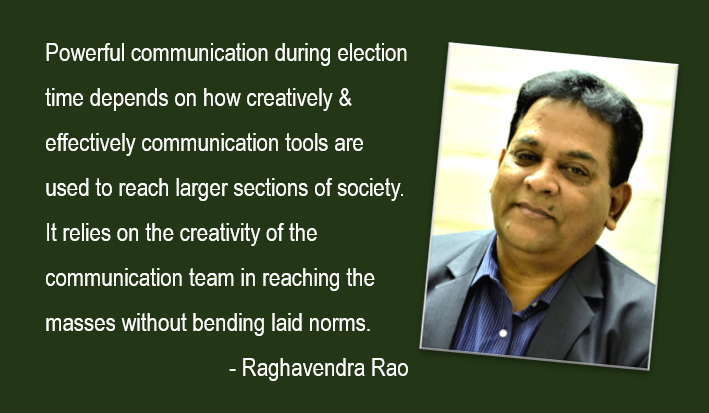 Election time is always a celebration for political outfits however it is a big challenge to reach out to audiences through various modes of communication available. With the evolving media pie and technological advancements, communication tools have also changed. With many city municipal bodies being very severe on usage of posters pasted everywhere and anywhere thereby bringing people angst to fore, this mode has virtually gone into hibernation. Even plastic/synthetic banners could barely be seen this time, tied to bamboo sticks in many cities due to tough environment norms locally. Another mode of direct communication was SMS which has also become obsolete now. In last few elections we saw calls coming from candidates, even those are debunked now with the availability of true caller. Personal contact is very vulnerable and expensive too.

Mass communication tools like radio, TV, newspapers exist in plenty and have been extensively used by all political parties. Cinema is also another option which during the elections can be used, but with too many political parties trying to reach the larger voter base through this medium this time, it became a spoke in the wheel with the intervention of election commission. With the Commission’s stringent norms and implementation of model code of conduct, the cinema medium had to pull its reins. Too many biopics were slated – NTR in South (two versions), Jayalalitha in Tamil Nadu, Modi by Bollywood and Mamta in West Bengal. Dreams fell apart of all producers and directors and even stars who ventured into this. Another challenge is that if the film is released earlier, since the memory of voter is short it may not impact voting patterns. With overturn of fortunes there may not be takers and viewers for them post election scenario which is understandable. The comprehensive loss of all these put together is estimated at over Rs. 100 crores. This does not include the income which would have accrued to the Government be means of taxes.

Most political parties took to social media where the digital designers and social media professionals have had a field day. But social media behaviour is different since there is an option to comment/react and the responses have to be monitored. With social media becoming crowded, there is also a backlash which the political outfits cannot manage like established brands and the medium turns out be a war zone. This works against the candidate and political outfit and hurts the brand hugely and also matters to the votes polled by him. Since the response cycle is very short there needs to be utmost caution taken by the communication team and quick and orderly rebuttals are the order of the day. Another challenge is the bureaucratic nature of political outfits which hinders quick rebuttals and takes longer response time resulting in subsequent damage to the set communication goals.

TV is another mass medium which is a crowded market but the election commission keeps a close watch on all of them with the paid news concept catching up. However TV channels find ways and means to oblige political outfits to accommodate additional time on panel discussions, debates, personal interactions, event coverage and road shows. This is other than the actual advertising which happens on channels. In media circles we hear that many regional channels have given ‘election season package’ to political outfits. Top slot channels charge as high at Rs 30 lakhs while tier 2 and tier 3 vary from Rs 15-20 lakhs. This is other than paid advertising which is at actual costs.

The Government which is in power always has an advantage over others; it also depends on the creativity of the communication team as to how best to take advantage of the situation without bending laid norms. Take the case of the current Government; they released a one hour biopic on a private channel in June 2018 inspired by the PM’s childhood story named, “Chalo Jeetein Hain”. This was aired first time on prime time at 9 PM. Another communication initiative they recently took was they made the PM interact with a cine star on a wire news channel ANI and the feed was taken by all channels across India. With this initiative they had the entire nation talking about it and post airing many channels started debating and discussing at length. This initiative also kept the social media busy for almost a day and half. It already has over 1.2 crores views on YouTube while the hashtag (estimated to have trended over 3 million) was trending for over two days. This candid interview seems to have grated on lots of quasi-liberal nerves, judging by the columns & TV outpourings for almost two days. This is the power of communication and it all depends as to how creatively and effectively communication tools are used to reach larger sections of society. Hence it is effective use of paid communication, unpaid communication and creative communication which matters most while reaching the targeted segment.

Nothing is what it seems!