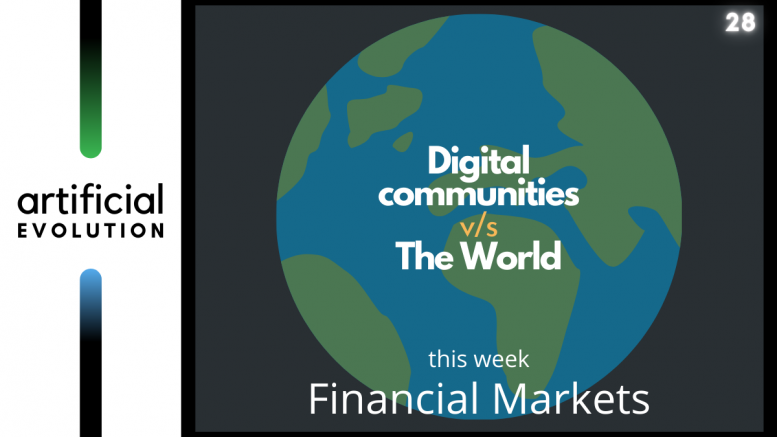 The primary use for social media is for users to stay connected. Our connections define who we are and we do online. This series attempts to focus on the power of digital communities and how, sometimes, they become catalysts for change.

Author’s note: I do own some BTC and I’m very sad right now.

Not sure if it was the DOGE meme or the fact I’d turned 30 this year and realised I had to be financially independent, that drove me to start investing in cryptocurrencies. The idea of owning 1 or more of a type of digital currency to a millennial just made sense.

Whilst I skimmed and researched online, a couple of things started popping out.

You’re going to rant about Musk, aren’t you?

To start of, let me be absolutely clear that I have a limited understanding about the global financial markets and most of my knowledge comes from friends, family and a lot of Google searches. So, please do not consider anything below as financial advice.

We know how negative press and rumours can affect share prices and demand for financial instruments. Social media & digital forums, the weird cousins of traditional PR platforms, was always looked as “tsk, don’t take what’s on there seriously”.

To a large extent, I agree.

But sometimes the power of a community with a goal is just too strong.

In late 2020, a bunch of Reddit users got together to discuss their opinions about the financial markets. Conversations ranged from how memes were now currency to how the big 4 banks were allegedly involved in market manipulation in a systemic way. An American video game retailer GameStop had started to become conversation piece of more and more investment subreddits. Users had realised that this company’s share was severely undervalued and price was allegedly being pushed down by hedge funds on purpose. Being the digital natives they are, the spark of reddit had now spread to local social media communities. Memes and related content started flowing around GME (GameStop scrip) was how it was going to make everyone rich and had become the people’s stock. After the first initial push in purchase, the network effect was in play. More and more users, some of whom had never invested in any markets before, were now becoming GME investors.

The goal was simple: Power to the people.

The community has squeezed “the man”

Further perspective on the GME story:

Another example is how one of the pioneers of private space exploration became one of the most hated individuals on the internet.

In Early 2021, the Tesla motor company purchased over $1.5 Billion in Bitcoin. At the time this was hailed as a great move in legitimising the value of the cryptocurrency. In March, an announcement was made that Tesla will now accept BTC (the bitcoin scrip) as payment for their cars. Bear in mind that till April, BTC in 2021 had a strong bull run.

Then in May, this happened!

The plunge was major. So much in fact, that the market may take another couple months to recover. Because Bitcoin is looked as the indicator of the crypto market, most currencies plunged along with it and investors across the world basically started blaming the rocket man.

His story with DogeCoin and how every time he tweets about it there is a change in price, the SNL appearance and the lunar module paid in part with DogeCoin is another story. Read the Forbes version here.

First, it’s not that simple. Understand that influence is influence. Whether the community is looking to blame somebody or to enrich themselves, if there is no purpose and commitment, nothing can be done.

Some suggestions on what to keep an eye out for:

2021 was the first time that a short squeeze like GME or max drop for Bitcoin happened due to conversations and rumours online specifically. These were major global developments that started on small social groups and gained immense traction.

Based on the growth of new tech based financial products and assets, this will probably continue. Twitter, Reddit, local forums and Telegram and WhatsApp are going to become catalysts for major financial movements.

A positive way to look at this situation is to ‘go long’. If you truly want to invest in any volatile market, a good way to avoid these peaks and troughs is to think 10 years ahead. Like GME and BTC, many lookalike groups and communities have popped up for other stocks or cryptocurrencies.

Read as much as you can from reliable resources. Social communities often speculate. And speculation is cool – but only sometimes

How communication teams helped S-T-E-A-R the ship during the pandemic: Part 2

To be or not to be. That is the question