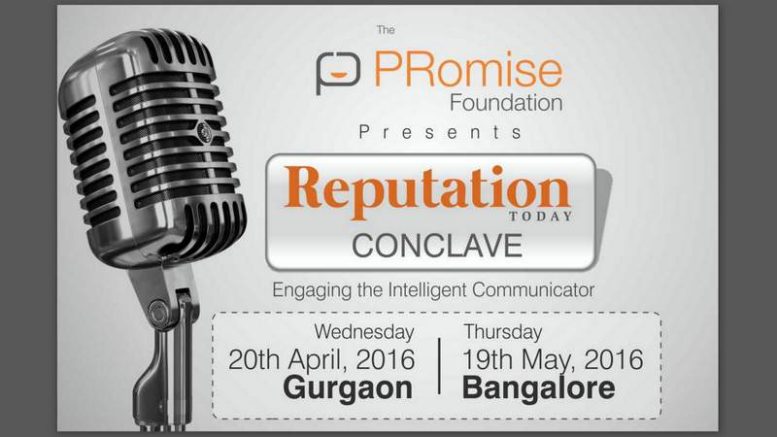 As a prelude to the upcoming Reputation Today Conclave at Bangalore, here is a quick recap of the Gurgaon Conclave as experienced by Arohi Kumari and Maria Chacko, two second year students from Delhi.

Conferences are what you make of them – for us, it was an interesting and informative experience. At the Reputation Today Conclave, we got a glimpse into the world of Corporate Communications. We were thrilled to share the space with some of the most senior professionals. The very first speaker Banmali Agrawala, CEO of GE South Asia, talked about the most critical challenge in today’s business world – the style in which businesses have conducted themselves. The single most challenge is the deep lack of trust that society has for businesses. This set the context to establish the importance of starting the dialogue about India’s transformation. It’s important for the society to understand your words and actions. A key takeaway was “Don’t shape the world, adapt to the world”.

The next speaker, Yatish Rajawat of LocalCircles, mentioned what resonated in my thoughts as well. He said, “You can do good and still make money in a profitable long business without being apologetic about it.” A lot of us have a wrong assumption about profitable businesses, and it’s time for leaders like Yatish to communicate this message.

Sairee Chahal took the stage next to speak about creating a community using the power of communications. Sairee is the CEO of the world’s largest professional forum for women. She explained that at Sheroes there are three types of job descriptions, each one different from the other. Operations and Marketing take up two thirds of the scene. The third and maybe the most important of all is, “Talking to women”. The best team members are appointed for handling this delicate task. They tend not only to job seekers but also to a lot of women who approach them looking for a mentor, legal support or even solutions for problems they face with family members regarding their education abroad. It was only towards the end of Sairee’s talk that we understood the point that she was trying to make, of how crucial a role communication plays in getting people together to create a large support system.

Vijay Nair, CEO of Only Much Louder, spoke about what he’s becoming increasingly popular for, crisis management. OML does not have in-house PR professionals because nobody understands their company like they do. The same way they cannot handle PR for any other type of company. He goes on to say that out of 500 events that take place in a year, only 3 will be crisis free. When the Jerry Seinfield crisis happened, Vijay responded on social media with 16 posts each one explaining the difficulties of managing an event, the things that could go wrong and what actually went wrong. His mantra for dealing with crisis is Brutal Honesty. This has worked out well for him because when matters were cleared with even the most frustrated customers, they turn around to support the company. Now that’s a game changer.

The topic on Reputation Management was led by Vivek Mehra, CEO of SAGE publications. Vivek Mehra implemented three things to ensure a better image for his company – namely Brand Building, Work Culture and Growth Acceleration. The most interesting part for us, as someone very new to the business was when Vivek spoke of the benefit of creating an anonymous channel connecting him to his employees to address their issues directly. This made him a more approachable person, and really changed the company around. This is perhaps something a lot more corporates should try doing.

The conclave gave us wonderful insights through the many stories that were shared. We could definitely use them as we tread forward in our careers. We also had the opportunity of meeting some really cheerful people. All in all, we’d say that it was a morning well spent, looking forward to many such events.

Facts in the age of opinion