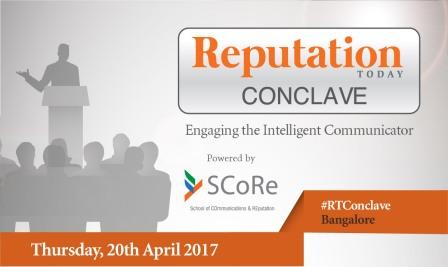 On the 20th of April 2017, The Park hotel in Bangalore saw a gathering of over 80 professionals from the communications business eager to learn new concepts about communications, storytelling and reputation. This was The Reputation Today Conclave’s second edition in Bangalore. The speakers lined up for the event were ace communicators and helped individuals gain knowledge in  their sectors.

The day started with Shradha Sharma, Founder and CEO, YourStory Media who shared her thoughts on Using Storytelling to Build Reputation. She mentioned that your stories should always be different and have alternate content so that it becomes easier to connect with the audience. It is important to listen to what people don’t tell you, because that helps you understand them better. It is critical to look for vulnerability if you want to work for brands. The quotes that she left us with were, “Don’t fake it till you make it” and “Be your own story, you can fake it to make it”.

The second session was by CVL Srinivas, CEO-South Asia, GroupM, who came all the way from Mumbai to speak about the Role of Communications in Change Management. He believes that organisations are going to change in some form, with regards to their habits and behaviors. He has 22 years of experience in the Media Advertising Industry. He spoke about how important the role of internal communications has been and it should be the main focus of every organisation as it builds long-term positive relationships in the company which are beneficial to everyone. “Make sure you understand the value of being a change agent to someone and how others can profit from it”, he emphasised.

Next, we had Raj Nayak, CEO, Colors-Viacom18 and Shreya Krishnan from First Advantage, India, discuss the Future of Communications and Communicating for the Future. Raj mentioned that communication as a medium won’t change, it is how we communicate that will change. Which means that the fundamentals of communication shall remain the same but the form might change. He told us about the difference between the words education and educate and qualification and qualify with suitable examples that helped us learn more about the aspects of communication. He concluded by saying that there is a lot of give and take, the more you will give the more you shall receive in return. When it came to discussing the difference between Public Relations and Advertising he said that Public Relations acts like an elder sibling to Advertising which helps it communicate more effectively.

The second half of the concave started with the young CEO of Xebec digital company, Sowmya Iyer who spoke to us about how to smartly use digital for earned media. She said that earned media is divided into two parts – content and channels. While the channels that we can use as professionals to drive the media are becoming very important, we should also look at content and how and why it connects with people. Influencers have become the most important part when it comes to promotions and marketing. Make sure you know the people who will carry your message and also platforms that you wish you use. Conduct data analysis to know the people who are talking about you in a good or bad way. She concluded by showing us a video on gaana.com which shows the perfect way a message can be communicated through the most appropriate medium.

The second last speaker, Nitin Pai of the Takshashila Institution spoke on The Understanding of Public Policy for Reputation Managers. He introduced the concept of information casket. He believes that people use different tools on social media. In today’s world information and organisation both are moving in a horizontal way. Even if an individual does not have a phone he would still know about something through either of the social media channels, so information will flow through any way.

The final speaker for the morning, Jessie Paul who owns and runs the Paul writer spoke on Do Reputation Managers understand Marketing? She says managing reputation as a standalone is like trying to control a cake through its icing. You can manage the reputation only when you have the control over the entire team. She also disagreed on the notion that PR or Reputation is the king. She gave an example of Snapchat and how they have launched seventeen Indian-specific filters in order to manage their reputation after the whole CEO fiasco. It takes very little to break the reputation. She discussed a wonderful quote that said, “Creativity is intelligence having fun”, which means people admire intelligence, and they are always attracted to fun—so the combination is fantastic. Managing and controlling your reputation with the help of defined individuals is vital.

The conclave ended with these outstanding sessions that have imparted tremendous amount of knowledge and insights to the professionals of the business.

This report is written by Amy Crasto & Mehernaz Fitter, students of the first batch at School of Communications and Reputation.

Be the first to comment on "Reputation Today Conclave – Bangalore"

Influencer marketing in the time of COVID-19