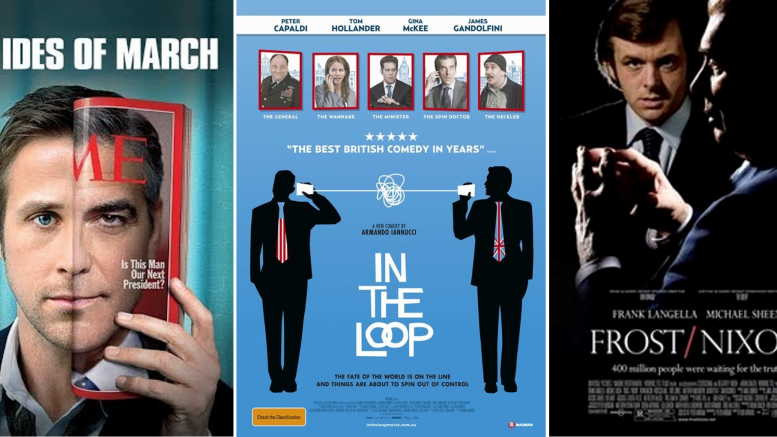 This past week Netflix released its Netflix original series called Sacred Games – a thriller based on Vikram Chandra’s 2006 novel by the same name, which gave me the idea to list down some movies for political communicators. Although I am yet to watch this series myself, I can tell from the reviews that the realism of the series is being most appreciated, as it pulls no punches in telling the stories of dark ethical and moral realms. Such TV viewing is rare, and every once in a while there are movies which tackle such topics where nothing but brutal truth can be appreciated. Politics is one such area, unpopular though it may be.

The emergence of streaming services has given a platform for several such genres, less popular but starkly interesting to some. In the pursuit of that realism, some of these works of art come remarkably close to how individuals who have professionals roles in the political ecosystems behave. I’ve shortlisted some such movies, including documentaries, which can be as enjoyable as enlightening, when it comes to political communications.

This hilarious British satire is based on the politics surrounding Britain’s military adventure into Iraq. The plot follows the extremely blunt Director of Communications for the British PM as he tugs the officials involved, some of them inadvertently in establishing Britain’s accurate stance on the war on terror. It carries good lessons in navigating the uncertainties presented (to the PM’s Press Chief) by several unnecessary people speaking up, information leaks (to the BBC) at the outset of large public events (a meeting of the UN) and involvement of actors with various intentions (the self-righteous involvement of the US), with the accurate and smart deployment of media muscle. *Disclaimer: Strong Language*

The term Ides of March refers to a day on the Roman calendar that corresponds to 15 March, for a variety of reasons marked as the day for settling debts. It was also the day that Julius Ceaser was killed. The phenomena seem to have been captured in the plot, where the presidential nominee of the Democratic Party (and his chiefs of communications) muddle the line of ethics, with their client’s nomination and their own careers at stake.

This is a must watch for those who are or train spokespersons. At the aftermath of the Watergate scandal and Richard Nixon’s subsequent resignation, British journalist David Frost gets the TRP shattering opportunity to interview the erstwhile President. Both tread a very fine line of conversational sensitivity very cautiously to meet their respective agendas. Both points of view and manners of preparation are adequately described and are food for thought.

Another from the world of US elections is this brilliant work by Peter Boyle where an underdog is placed as a contender against a solid veteran. This is a real hard case for how to create a real story out of little insight, few details, and a drive to succeed. The movie The Ides of March is loosely based on this movie and both explore human behaviour when it comes to politics, high stakes and ethical conundrums.

This may resonate well with the ecosystem in India as it is an inside look into the incredibly high-staked presidential elections of a third world country (Ghana), eager to cement their legitimacy amongst their first world counterparts, with two candidates who are willing to go to any length to win (sound familiar?).

This documentary is a little old (originally released sometime in the late 80’s) and a copy of it is hard to come by, but I did find its transcript here. It deconstructs the invaluable role that advertising has come to play in shaping public opinion, mapping its roots back from World War II to the 1980s.

The most recent entry in this list, this documentary released in 2017 portrays the rise of the Aam Aadmi Party into national politics. The work is based on several hours of real footage which was collected during the party’s journey and gives a good amount of insight into its ideological path, campaign strategies, people involved and how it all came together.

When one lives by Public Relations every day!