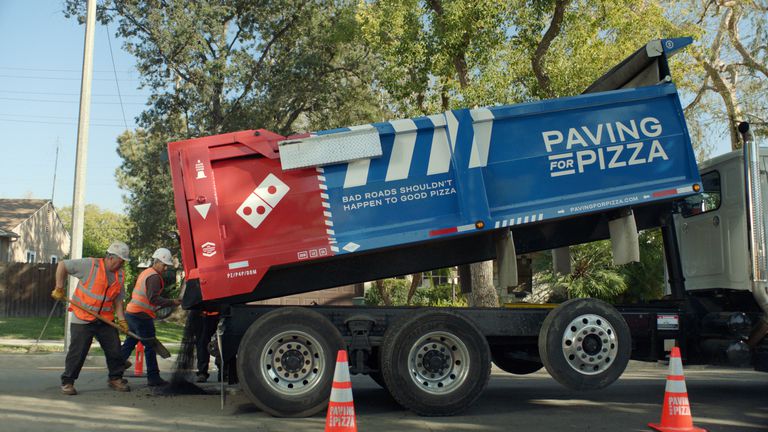 For better or worse (mostly worse), “junk food” is all over the place. And, we were constantly trying to dis-engage ourselves from this ‘evil’, so to say. Schools do not give permission for any junk food to enter their premises; health freaks shun it like the plague. But, guess what? A popular brand against this background, is involved in an attempt to redeem itself. Like Domino’s. I believe Domino’s is no longer just selling pizzas, it’s stepped out into more useful activities to help out citizens – like, fixing infrastructure in US.

The pizza chain announced last month that it was partnering with towns and cities in the US to fix potholes, with the goal of providing smoother rides for Domino’s delivery drivers. It seems hundreds of recently repaved potholes in four towns – in Texas, Delaware, Georgia and California feature the company’s marketing slogan, “Oh yes we did.” And the company isn’t stopping there; Domino’s will provide grants to up to 20 towns or more. They admitted that they “care about customers and how we can make their experience better”. Yes, they expect a great deal of good customer engagement over the summer during this program. The campaign struck a nerve with social media users who questioned why a restaurant company, and not the government, is fixing roads in the US.

But wait a minute, why can’t this sentiment find resonance here? Won’t we be better off too, if our roads and potholes are efficiently managed? Don’t we see how it is mismanaged all around us? Specially since the monsoons have triggered off. Look at the Maximum City, which is being literally washed away with each heavy downpour. With #WakeUpFadnavis trending, the question that is upfront is: when will potholes in Mumbai be filled? And, the capital city, is not way behind, specially when pre-monsoons waylaid us.

From fixing infrastructure to tugging at heart strings. That was an attempt that brands made during the recent Eid-ul-fitr. If brands were looking at marketing their products effectively, it seemed this was the time! Snapdeal announced the launch of its Eid Store, a one-stop-shop within the Snapdeal platform, for all festive requirements – aimed at making the shopping experience engaging and convenient.

The Tang TVC beautifully brought out elements of ‘togetherness’. Interestingly, the commercial starts off with a voiceover narrating how the holy festival of Ramadan should be welcomed every year by imbibing in children the value of doing good deeds and praying, while the family enjoyed their favourite drink – Tang. Malaysia Airlines portrayed Eid as a unifying force across different countries. McDonald’s ad featured the problems faced by a Malay-Muslim McDelivery rider, who was fasting throughout his shift. Coca Cola’s touching ad showed a Muslim and non-Muslim woman silently bonding over bottles of soda at sunset. Incidentally it did seem to strike a chord with the consumers and was widely shared on social media.

We note consumer insights of sharing, kindness and forgiveness in these ads. But, do these appeal to the Millenials or GenX? What is the impact that these ads cut with these new audiences? Specially so, as we are seeing how the rules of engagement are getting rewritten. Take the new series – Lust Stories and Sacred Games. We notice how these platforms have become more of an alternate supporting medium for the bigger industry. This would not have been the case, say, three years ago.

Stories and storytelling during lockdown