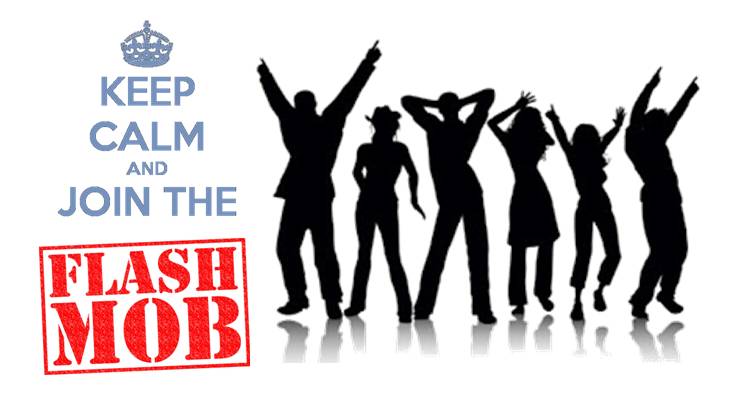 At the workplace, ‘flash’ means Flash Mob. It’s a question of bonding over Flash Mobs in the corporate scene, where the spotlight is your dancing shoes!

Dance is not limited to the Reality Shows like “Jhalak dikhhla jaa” or “Nach Baliye” or “So you think you can dance,” it has already entered the corporate corridors. No longer are the working places prim and proper, as Indian companies have added a fun element, where employees have a blast! Flash mobs have been flourishing in the Indian corporate scene.

Talking of dance, at the Mumbai office of Accenture, they dance daily for 5 minutes before they start their work. A creative start to their day! One of the best things about dancing is that while you’re having fun moving to music, you’re also getting health benefits of a good workout. From building team spirit among colleagues and announcing discounts for customers to spreading official and social messages within the organisation, more firms are using flash mobs to achieve many goals.

Grand Hyatt Mumbai arranged a flash mob to inform guests of various offers. It strengthens the bond between colleagues, refreshes them, helping them perform better at the work place. And, weren’t the guests were thrilled!

Last month, Birla Sun Life held a flash mob for the first time to tell employees about the importance of systematic investments. It got people interested, and indeed took the employees by surprise!

IT companies used it to light up their teams. IBM added excitement to a major conference with a “flash mob parade”. A flash mob was organised at HCL Technologies’ SEZ Bangalore Campus. The event saw more than 40 employees dancing to hit numbers in the cafeteria during the lunch hours. It was a unique initiative, which was well received by all the employees. Capgemini, Mumbai organised a flash mob to promote their annual cultural event, Jashn. And it was a roaring success, with crowds thronging to the cafeteria to watch it, and also joining in! Infosys, Chandigarh organised it right outside the main campus, had a distinctive Punjabi touch, with a little Bhangra sequence thrown in! Jai Ho from Slumdog Millionaire was the beat that Infosys, Pune chose to dance to. In the same city, Ernst & Young, Pune also followed suit. It also entertained the employees at  Microsoft, Hyderabad. The freshers of Cognizant, Bangalore had a great time at the dance extravaganza.  The employees of TCS Bangalore too got a taste of it at the office café. At Tech Mahindra, Mumbai there were some acrobatics added on to the regular flash mob.

Opera Mini, Noida celebrated 50 million Indian users, with a flash mob. McGraw Hill Education India, Noida  recently surprised its employees when their India team got together for the flash mob during their virtual global kick-off.

Far away on 10th Avenue at New York, when lunchtime comes around, it’s dance time for some employees. At Lunch Break, a free midday party happens here, hosted by Flavorpill, the online culture guide. The goal is to get the masses to move and groove.  You could call this what it is: a fun, daytime party for people to enjoy themselves for an hour.

Welcome to new workplaces, which are offices by day, and clubs by night. With India emerging as one of the biggest markets in the world for startups, workspaces are transforming and how! Come weekend, and party-lovers  flood into the restaurant and dance club called Social, at Hauz Khas Village and then the fun starts. After nightfall, the bar is busy and the dance floor is full. Come day, and the nightclub is  transformed into a comfortable office. Sharing desks,  bouncing ideas off one another, hiring, collaborating to expand their businesses – is the scene at Social. There are photographers, designers, journalists, software programmers but what is significant is that everyone is either a freelancer or working for a small startup.

The first co-working offices began springing up in India about three years ago. Today, there are at least a dozen in New Delhi, Mumbai, Bangalore and Hyderabad, where most Indian startups are based.

Productivity, performance, efficiency. It all starts with a dynamic workforce that is created and cultivated by the organisation. Dancing may seem like a leisurely activity, but research has shown a wide variety of benefits. Apart from improved physical fitness, it’s socially interactive, musically expressive, and dynamic. Plus, let’s not forget the enormous benefits dancing has to offer in the areas of confidence, etiquette, and empathy. Small wonder, it’s gaining so much popularity.

So, some takeaways are:

Dance, as an activity has shown that it generates a sense of community among employees that will translate to all other aspects of the work day. So, it is clear that dance could boost your company’s productivity by engaging employees.

The talent crunch in Public Relations