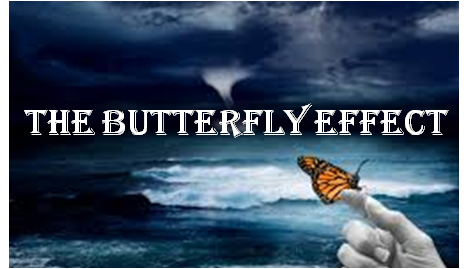 Watching two epoch-making events unfold in the last few days, suddenly got me thinking of a phrase I had come across – “the butterfly effect”.

In the ‘chaos theory’, the ‘butterfly effect’ is a small change which can blow out of proportion, and can trigger off a major change. Chaos is the science of surprises, teaching us to expect the unexpected. Interestingly, this phrase, coined by Edward Lorenz describes a unique effect – that mere flapping of a butterfly’s wings can ultimately cause a (hold your breath!) tornado. For instance, it has the power to cause a hurricane in Japan, after a butterfly flaps its wings in another remote part of the world – say, Argentina. It may take a very long time, but the connection is real. If the butterfly had not flapped its wings at that exact point in space/time, the hurricane would not have happened! In effect, small changes in the initial stage, can lead to dramatic changes in the final result!

What I was witnessing here – were two events that stole the thunder, for sure. Definitely kicked off a hurricane, spurning off speculations, which are not stopping!

The first event: On Sept 1, a momentous event took place, which had all the TV channels flashing it. It was the full-fledged Jio launch, which had customers standing in queues to get SIM cards (which sadly were not available in many of the stores in Delhi)!

The Reliance Jio revelations are distinctly disruptive; and, it was supposedly, “setting a tough benchmark for its competitors as data becomes the new oil”, experts said, reacting to the announcement, which was made with a lot of fanfare by Reliance Industries Chairman Mukesh Ambani at the company’s 39th Annual General Meeting.

Yes, it had indeed, rustled up a lot of curiosity. A student, studying for Masters, disclosed that his sister had already picked up a Jio card (on the very first day of its launch!) and he thought the offer was “insane”, with free voice calls, messages and data till December. An autowalla I take everyday, however was slightly skeptical. There is a lot of interest, but one will have to wait and see, he said with caution, as we passed a store in the Alaknanda market, where the waiting line was stretching well beyond…on to the road!

The second event: A few days later, was an event that Tim Cook, CEO, Apple Inc called on Twitter: “Touchdown iPhone 7!”  The launch of Apple iPhone 7 took place on September 7, at The Bill Graham Civic Auditorium in San Francisco, California.

Predictions were that it would be Apple’s “Lucky No 7”. At the momentous launch, it was reported that the scene looked like a full-blown rock concert. The people attending were silent as they waited in awe, for the Apple iPhone 7 to be revealed; and they clapped and applauded as the intricate features were unveiled, one by one. We learnt that it came in many new colors, had a dual camera at the back and the removal of the headphone jack…all propped it up to trend on Twitter.

But, what followed was – mixed reactions. Twitter erupted with comments – some were happy with the all new black iPhone 7 and its AirPods, but others tweeted some off-the-cuff reactions!  “The #iPhone7 sounds cool, but it still doesn’t come with teleportation or instant french fries so I’ll just wait.” says one tweet. “ïPhone is the Salman Khan of the mobile world. Expensive, just one design, same performance, no chance of enhancement, blind fan following,” said another tweet, which was apparently “winning the internet”. Another friend of mine tweeted, as the major TV launch was on – “No, no, you can’t do this to us!

And, was a connection brought in with air travel too. This article I read, which focused on a face-off between iPhone 7 and air tickets and went on list out sixteen countries you could visit for the price of a brand-new, shiny iPhone!

So, it finally brings me to point, when I’m wondering – are these two events a mere flapping of a butterfly’s wings, that will lead to larger repercussions, or…..will it have the reverse effect???? Will it be just a flip-flop???

Be the first to comment on "Getting into a flap?"

Russia-Ukraine War: Implications for use of ESG in Investment Decisions

In Conversation with Roger Bolton

Being Innovative, Fearless and Humble