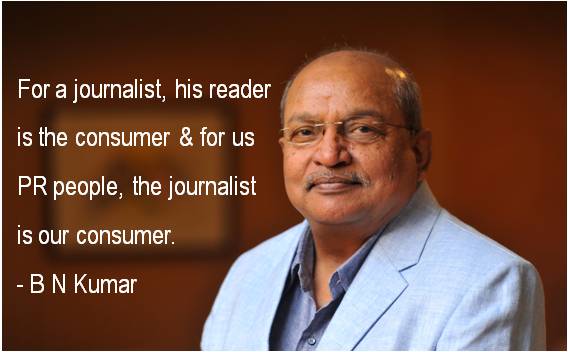 As a journalist, I hate when some people tell me that they can get stories done by doling out gift vouchers. And as a PR professional also, I hate the practice of giving out vouchers and expecting news clippings in return.

It hurts the self respect of journalists when you offer them gifts or gift vouchers, anticipating coverage in their newspapers or magazines. This practice straightaway amounts to quid pro quo. Some PR practitioners may argue that gifts-for-reports is not a new phenomenon and that they have been paying off some media persons. That’s the catch phrase – paying off some... I have also come across media friends who counter the argument by saying it was  “you PR guys who introduced this dirty system and spoiled journalists”.

I am not sure as to how and when exactly this gift culture began. But from reporting days I can recall couple of incidents of PR guys (as they were and still are called with an element of disdain) trying to thrust down gifts on us. As a cub reporter at UNI, I once noticed an invitation from a social club mentioning at the end: Gifts will be given after the press conference. When I asked the sender as to what was the need or relevance of the qualifier, he retorted: But don’t you journalists expect gifts?

On another occasion, at a press conference to announce a seminar on dowry menace, the organisers gave us envelopes carrying Rs 25 each (Yes! two ten-rupee notes and a five rupee note, to be exact) along with their press release of the programme.

I got up from my seat and threw the envelope at the person addressing the press conference. Other reporters quickly followed suit. I remember the then Chief Reporter of Indian Express Manu Desai calling up my boss at UNI, Chandu Medhekar, to congratulate me for my ‘courage, conviction, honesty and straight forwardness’.

As a PR upstart later, I was aghast to see some journalist friends literally queuing up to receive expensive safari lengths and sarees which were given as media gifts by a leading textile company. Then, there were some isolated but nauseating cases of few journalists trading their gift vouchers with some unscrupulous PR people who were buying them back at discounted rates. These repurchased vouchers would later be recycled as fresh gifts to media! Thus both sides stood to gain.

I sincerely hoped, till the other day, that such cases are relegated to history now and that the gift culture is on the wane. But again, I was shocked to hear a PR guy cribbing: “Yaar, gift voucher dene ke bawajood bhi coverage nahin aaaya” (Did not get media coverage despite giving away gift vouchers).

When I told him point blank that gift vouchers do not ensure any coverage, he shot back: “then why do we give them?”

I repeated: “Yes, why do you have to give them?”

This brings us back to the moot question that every PR professional faces today – how we can ensure coverage for our clients.

PR is no rocket science. While many professionals would like to argue that media relations are not the beginning or end of PR, I am of the firm view that at the end of the day, media coverage matters and matters a lot. This also brings us back to the point about the way we write our press releases which often tend to confuse the journalist rather than helping him or her write a proper story.

While I would like to discuss these aspects later, I want to leave the reader with some thought on making PR a bit creative. It’s almost a cliché to say that PR stories have to be media friendly, it is pertinent to understand what sells with journalists. For a journalist, his reader is the consumer and for us PR people, the journalist is our consumer. Just understand what a journalist writes or wants to write for his reader. You are home.

As the communication guru David Ogilvy used to say: ‘The Consumer isn’t a moron. She is your wife.’ More on this, later.

Be the first to comment on "Gift vouchers won’t fetch you media clips!"

Measurement without an Account Planning foundation is a waste of time!