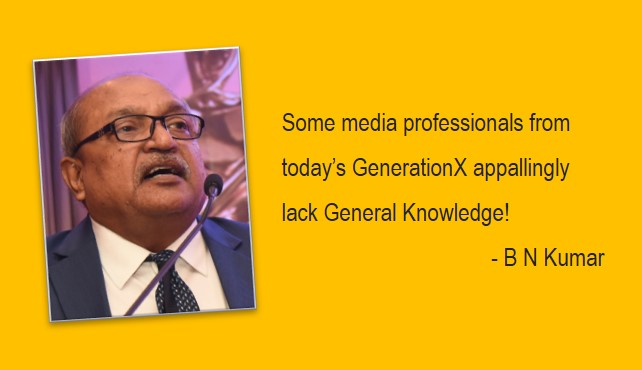 Veteran journalist Kuldeep Nayar’s words – you should read a lot – still echo in my ears. I heard him saying this to our batch of journalism students during his visit for an Editors’ Guild meeting at Hyderabad way back in 1975. That was the year that I had just entered my journalism classes at Osmania University. And I managed read whatever I could pick up and later improve the skills of reading and writing as I was a Telugu medium student till my graduation (B Com). But for me, and may be another two, I do not think anyone from among the 30 students of my batch survived in either journalism or PR. I have a strong feeling that even now hardly anyone who does media studies – from BMM to BA in journalism – takes up media as a profession. They go for media courses either as pass-time because they do not get admission to any other faculty or just to add a yet another qualification. I hope I am wrong!

Sample this. Mumbai Metropolitan Region (MMR) alone has 110-plus colleges teaching media, advertising and PR as a comprehensive course. You have at least 2,000 media students passing out each year considering even if 20 students pass out of each of these colleges. And, at least half of them go for PG courses.

Recently, we (at PRCI) had an opportunity for interns in journalism for working on editorial supplements for a Mumbai newspaper. While we received few entries to our invitation to write essays on some current topics, one of the candidates bowled a bouncer! We asked him as to which are the newspapers that he reads. He shot back: “Why should I read any newspaper and know about what has already happened?” The panel of interviewers did not know where to look! And this reminded me of a question that a journalism student at Andheri (Mumbai) asked me: who is Rajdeep Sardesai!

This is a dangerous trend. Not that everyone should know about Rajdeep. It is this kind of generation that is fed wrong information – not just fake news – and they lap it up. Rewritten, distorted history is being churned out day in and day out during political campaigns with no questions asked. One needs to have either knowledge or a doubt to question fake statements.

Democracy and free communication go together. Wrong or fake information (which actually is no information at all) is detrimental to democracy. Reporters Without Borders has recently said in its World Press Day message: Fake News – Victim is Democracy.

I may be exaggerating my concerns about lack of reading among the GenX media professionals. But the kind of indifference to gaining knowledge that one comes across worries one.

At the risk of sounding like a Pravachan Samrat, I would like to stress that the responsibility lies with us the so-called seniors in the profession. Be it in colleges, places work or even Conclaves and seminars, we should engage the youth in reading and then writing what they read. I am not, for a moment, suggesting that we should be conducting Competition Success Review type sessions.

Let me illustrate: For an essay competition on Environment Day, we could ask the young writers to write about the degradation and future challenges. I bet, they will be forced to read about the recent disasters and then effectively ring alarm bells for the future. They will not be able to write a word without referring to the smog in Mumbai and Delhi or for that matter the froth-spewing Bangalore lakes!

PRCI has begun to make small experiment to engage the communication student community through the Young Communicators’ Club (YCC) at mass media colleges and universities. We hope this YCC plant will flourish and emerge as a banyan trees in the years to come with the help of all media professionals.

PS: While on PRCI, I would like to share a piece of interesting information about a young student, Nitignya Waghela, whom we felicitated with an award as recognition of her social work. She is single-handedly responsible for making at least a hundred children from poor families go to school. Today, having inspired by the award, she is working on a project to set up a pre-school at Palghar in the outskirts of Mumbai with the help of a good samaritan who is giving her 4,000 sq ft area at a nominal lease of Rs 10. The school, notably, is for the children of migrant labour who cannot get admissions in regular government or private schools for one reason or the other. Shiksha Foundation with which Nitignya works and which has permission to run classes from kindergarten to 4th standard will take care of such children. Nitignya started her social work with her pocket money when she was in her high school and today, while doing her CA course, she takes time out for spreading education.

Hopefully, these children won’t ask: why should I go to school!

Be the first to comment on "Why should I read newspapers?"