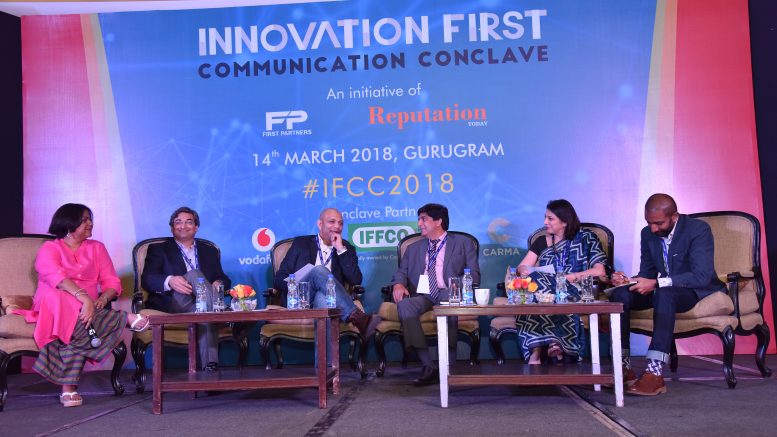 Does innovation in business have a connection with innovation in communication – this was the topic of discussion at the panel discussion held on March 14 at #IFCC2018. The panel was moderated by Arun Sudhaman (The Holmes Report) and the panelists were – Ajay Davessar (HCL Technologies), Ishteyaque Amjad (Coca Cola India), Jaideep Gokhale (Tetra Pak), Paroma Roy Chowdhury (Softbank) and Shefali Sapra (Danone India).

Listening to the speakers, gave me the impression that innovation starts at the top. It’s important to set the tone, and create a climate. And, today we can see business leaders doing it. Innovative cultures happen when organisations work at it – as it was apparent form the conversations that followed.

How can communication lead innovation, was the first question put forward to the panellists. Innovation has to have a purpose and must work towards solutions. For innovation to be effective, it has to be simple said Ishteyaque Amjad (Coca Cola India). Quoting George Bernard Shaw, “The single biggest problem in communication is the illusion that it has taken place,”  he went on to affirm, “Communication is what sticks with credibility”. He narrated the story of Coca Cola, which had an interesting history – for hundred years, it had one story, for there was that “magic formula”. Then came the disrupted world …

Giving another angle to this was Paroma Roy Chowdhury (Softbank) who said in business it’s communication that is important to shareholders, and innovation can follow. “The primary narrative is communication which is core for business,” she insisted.

Innovation creates a spark and communication creates the culture which is needed to sense what relationships are needed to get the spark going, said Jaideep Gokhale (Tetra Pak). We are in an environment that is feeling the pressure of scarcity of resources; we are becoming secular, and we don’t look at what others are doing.  “We have a huge role to play in external communication and create growth,” he pointed out and described the example of recycling cartons at Tetra Pak that were used to make the roofs of cowsheds, which in turn, led to increased milk production.

Elaborating on innovation in communication, Ajay Davessar (HCL Technologies) explained that innovation is doing something new that is relevant to the audience. How does communication hold and sustain the culture of innovation? Then he got on to describe an innovative model, which he called the LOVE model – Listening, Organising, Valuating and Echoing. And everyone loves an acronym!

There is an overdose of innovation today, and how do you address the challenge was a point taken by Shefali Sapra (Danone India). It starts by “engaging and listening to the stakeholders” and she stressed the fact that they do it very seriously at Danone. Citing the example of their “Something missing” campaign, she displayed how they tried to do it differently – to change the way people looked at ‘protein’. Communication is emotional, it touches you. It’s all about bringing in shareability and virality.

How do you ensure a narrative around innovation, questioned Arun Sudhaman. Refering to the problem that Coca Cola faced – the ban during cultural event – Jallikattu, which led to fall in sales, Ishteyaque Amjad elucidated how they used communication to ultimately bring about a change. Shefali Sapra’s solution was to focus on two elements – reliability and shareability. As communicators we need to show the mirror to the management and say – what about looking long-term and not just focusing on what is short-term. For Ajay Davessar, the reality was that “unfortunately we are challenged as communicators and we are underprepared”. And, his solution was – “We need to focus on execution”.