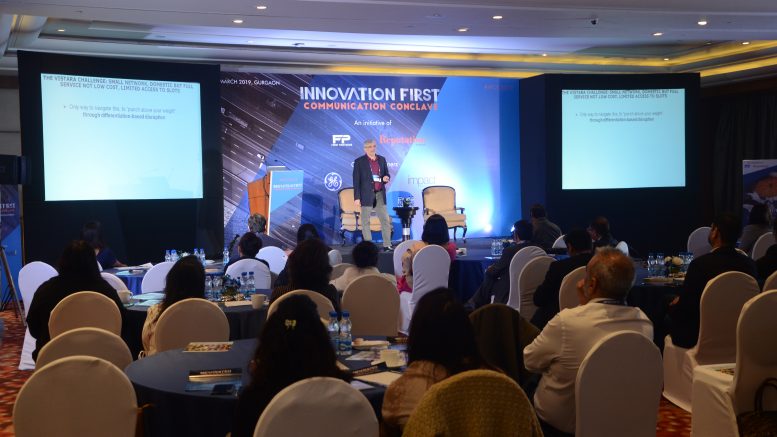 With the pace of change accelerating exponentially, has communication become more important than ever?

Behind all great achievements there are stories of creative entrepreneurship and innovation – this was the running thought at the Innovation First Communication Conclave held on March 7, 2019 in the capital city.

A brand that was born with ‘innovation’ at the core was Vistara, which Sanjiv Kapoor, Chief Strategy and Commercial Officer, Vistara (TATA-SIA Airlines) elaborated on. The brand story was living proof of “how passion and innovation can make a difference”, as he put it. The challenge was – with a market value of 4%, how do you attract attention? “You have to punch above your weight”, through differentiation-based disruption. And, that’s what Vistara did. The goal was to make people look forward to flying again and extract a premium for the experience. With a focus on claiming the aviation heritage of JRD Tata through ‘The Vistara Retrojet’ , making flying something people looked forward to, following the ‘Human Decency’ principle, driven by the ‘Golden Rule’ and by getting the frontline staff engaged – the brand excelled. “Instead of a race to the bottom, we started a race to the top!” he exclaimed.

India Innovation Outlook 2019 – the study by First Partners took centrestage next. Atul Ahluwalia, Founding Partner, First Partners revealed that “innovation is the most abused term” but this study was the first communication study that tapped into the knowledge of CFOs. The big question was – how do CFOs ensure constant business success in a VUCA world? The revelations were many that went against what was the general belief among CFOs – like business success meant social value creation, business goals are dynamic and changing, CFOs lose sleep on rapidly changing customer expectations, the biggest hurdle to financial success was poor brand image, financial success was very difficult if reputation is poor, CFOs defined corporate reputation as ‘trustworthy’ company, communication is extremely important for driving business success and so on. The most innovative companies this year that the study threw up, were – Oyo, Reliance Jio, Paytm, ITC and Swiggy in that order. The final verdict was – CFOs can be the new CEOs in a VUCA world where new strategies are needed to make financial success a constant, the focus moves from shareholder value to stakeholder value, enterprises need to up investments to create goodwill to prevent investment outages during crisis and CFOs and communicators are indeed, friends!

“Communication is the most critical factor and we must communicate with ethical value and corporate governance” shared Amit Roy, NIIT during the Panel Discussion on: “How does communication contribute to business outcomes for an organisation”, moderated by Dilip Yadav, First Partners. Rajiv Kapahi, Boston Scientific added that communication is so basic, it is the core differentiator of human beings vis-à-vis animals; we should communicate effectively, so that the results will be meaningful and transparent. Nitin Garg, Genpact recalled when he had the target of a 10% reduction of force, and how the communication team pitched in to help out and how they got the culture right. How do you build a brand that stands for credibility and ethics, questioned Narayanswami Shekhar, Times Innovative Media and he displayed how they got it right in an unorganised sector – by insisting through right communication that they are “the solutions provider”.

The Panel Discussion  on “Communicators today must help the Bottomline: the enhanced role communicators need to play to achieve this” was moderated by Arun Sudhaman, The Holmes Report, who introduced the topic by saying that it is an “evergreen topic and the challenges around value creation and investment has never gone away”. Talking about bottomline, the comments varied. People are not buying products, but are looking at other things, and this cannot be an afterthought, said Indu Sharma, Reckitt Benckiser; Latika Taneja, Mastercard accepted that it is the biggest challenge we are facing, and it’s a journey we have to undertake; Ruchica Tomar, MakeMyTrip put forth the fact that somewhere we need to lean more on the craft, which sits between science and craft; it is critical for a top boss to own PR and the bottomline cannot be narrowly defined as sales, insisted Shikha Sehrawat, TripAdvisor and Suniel Bezbaroowa, Deloitte said it is about intangibles rather than tangibles and that “we bring intense value to talent, clients and society, which is most valuable”. About measurement, Indu said that we need to talk the language of the people for them to listen and make everything measurable and impactful, while Ruchika suggested that it’s important to do advocacy for the work we do. In crisis everything goes out of proportion, said Shikha and Suniel displayed how it’s at the time of crisis, when the real value of PR comes out. Finally after discussing FOFO (Fear Of Finding Out), when the question of how to measure your value was put up, some interesting points popped up: build trust, said Latika, build a model around reputation said Ruchica.

Next on the agenda was a Fireside Chat which had Rachana Panda, CCO, GE South Asia bringing up questions to Sudhir Mathur, CEO, Cairn Oil & Gas, Vedanta on his view of innovation in other countries. He said a lot is happening in India, but he admired what is happening in the education system in US and that is because of the diversity of students they bring on board. At Cairn, he said it started with recruitment, for “you recruit the culture you need to set”. About balancing innovation which is discipline and creativity, he disclosed that at the core, for the benefit to come to the team, both creativity and discipline comes into play. Talking about the communication function – he saw the role being very intense which helped them position Cairn in the global arena and also played a significant role in attracting the right talent.

Mobility as an industry is a movement, said Sakshi Vij, Founder & CEO, Mylescars as she began her talk on innovation in the mobility industry. Discussing the fact that the consumer is becoming intelligent, with the market going to hit three million users in India. She revealed how her company was becoming an Intuitive Smart Commuter Solutions provider, how they are trying to introduce ‘Car Subscription’ and why the future of car ownership should be the ‘Zero’ commitment they offer, i.e. just sign up and get a car.

“All leaders should be great communicators, and every communicator should aspire to be a great leader,” said Ramanathan Ramanan, Mission Director, Atal Innovation Mission (AIM) in the last Special Address. He detailed how at AIM they were trying to harness the youthful energy of our demographic dividend, and convert it to create an eco-system of innovation, thus “creating a new idea of our dreams”.

The finale was the innovation showcase presented by Sujit Patil, Godrej Industries, where he showed some brilliant Godrej campaigns which ensured both the reach and the impact of the campaign shot up! #Think Different revealed a corporate video with a rap that was a fun ride driving engagement. (This rap happened before Gully Boy, he shared with me later!) The quarterly updates on Facebook, the leadership blogs, the promos on Mother’s Day and Father’s Day that professed equal parenting and the Dry shampoo launch by BBlunt. “When you reach out to consumers in a quirky manner, it works. Np CFO will refuse you funds if you can show results?” he commented.

So, the learning of the day to me was Innovation is the only way forward. Today, businesses in all industries must innovate and find new ways to communicate with their stakeholders – internal and external, if they want to be heard well. They must reinvent themselves to survive in the digital economy.

Building a Culture of Innovation in your Organisation

Why is ESG becoming a big deal?