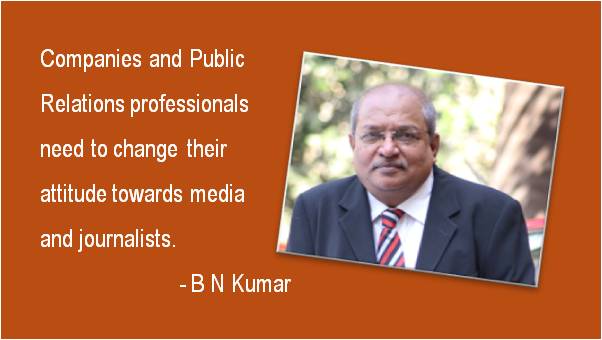 Reacting to my last column Are We Media Ready, a journalist friend commented that many PR people do not understand media deadlines. Journalists are often left hanging as Public Relations people keep delaying responses to media queries. She is right. Either you tell media that their queries cannot be answered or send your response well in time for the journalist to file his / her story.

Cultivating media relations is a painstaking experience. It does not happen overnight much as Rome is not built in a day! And when you have media sending you queries either addressed to your company or client, it is our bounden duty to respond in time.

I have heard corporate communication professionals and PR consultants often complaining that media tends to do one-sided stories. It’s not true anymore. Those days are gone. I have seen many journalists trying to be honest and balance their stories with ‘both sides’. Many a time,  journalists may not even know which PR firm to contact, yet they try their level best. I have been receiving calls from media friends inquiring about companies that we do not handle. Yet, with our ever improving networking through various Whatapp groups, we try to get as much information as possible.

Here is a reverse situation. The other day, I was pleasantly surprised to receive call from a leading English daily for my client’s stance on a property tax notice. I was happy that this journalist took pains to find out who handles that company in question from another correspondent or another newspaper.

As I keep saying during my media familiarisation sessions, everybody has a deadline to work on. But media deadlines are worse as they function in an atmosphere where their product, the news, gets stale much faster than any other product. The news comes with an immediate expiry date!

There could be times when you are confronted with short deadlines as the concerned journalist is about file his story. These kind of situations arise particularly during spot stories such as police investigations, court cases and arrests. Journalists cannot be expected to wait for a day to file such stories. On the contrary, they are being only fair to you by asking for your side. Actually, they may be doing you a favour as they are not – I repeat not – bound to take the other side during court cases or arrests or for that matter on regulatory actions.

Companies and PR professionals need to change their attitude towards media and check their knee-jerk reaction of trying to get negative stories killed. Please do not expect media not to report stories on the developments mentioned earlier.

Media deadlines are sacrosanct. Meet them to get your point across.

Last week, I was in Colombo for the launch of Public Relations Council of Sri Lanka under the aegis of World Communicators’ Council. I was told by a senior business journalist that many PR people in his country too do not understand media requirements. After a particular story is carried by English and Sinhala newspapers over two or three days, the PR people expect even a weekly to carry the same news.

“PR professional bodies must give a serious thought to making companies and fellow PR men and women understand media functioning,” he said. He was happy to know that the message Think-like-a-Journalist is spreading in India and said it was about time the Lankan counterparts emulated it.

Be it in India or Sri Lanka or any part of the world, I think there is a need for a constant dialogue between companies and media – the sources of the news and newshounds – for an improved understanding of each others’ needs. And it also depends on how we professionals sell an interesting story, or for that matter, how we provide a saleable angle to a development.

For a journalist, his publication is his product and his reader the consumer. Unless there is something for his consumer, he won’t listen to you.

Communication is akin to diplomacy. Watch this space for more on this!

They are basics for a reason

Gear up and know your media

It’s all about the right connect