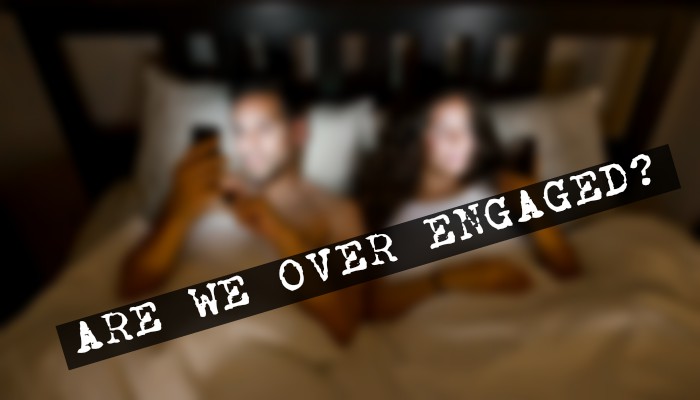 Are we over-burdened with the taxing times? Are we getting caught up in the hurly-burly of the real world? Are we slowing down in terms of our physical and mental well being?

At the risk of sounding pessimistic, I am referring to two news items that I recently read: one, about social media pushing back sleep time and two, that India appears to be the saddest country when compared to its neighbours.

Are we so over-engaged with WhatsApp, that it is keeping us awake, way past bedtime? A study has revealed that we are so engaged with the internet, that sleep is evading us. Facebook and WhatsApp is making people put off sleep by more than one and a half hours (100 minutes) every day, and that they wake up ninety minutes later, too. The study published in January 2017, in the Indian Journal of Occupational and Environmental Medicine, also found that while the quality of sleep was above average, most people usually checked their phones and tablets at least four times after going to bed.

Sleep disorders and sleep loss, say doctors, can produce tricky conditions varying from heart disease to anxiety. What could be a good prescription for this malady? Easy – shut off your devices, near bedtime. How many would take this up seriously?

It’s not just sleep evading us, it’s joy and happiness too. India is saddest country among all its neighbours. In fact, China, Pakistan, Bhutan, Nepal, Bangladesh and Sri Lanka fare better. I am referring to the World Happiness Report 2017, released in March, which is a landmark survey of the state of global happiness.  The report was released at the United Nations, at an event celebrating International Day of Happiness. For good or for bad, India has dropped from 118th position in 2016 to 122nd among 155 countries in the 2017 World Happiness Index. In fact, all of India’s neighbours were ranked above – China (79), Pakistan (80), Bhutan (97), Nepal (99), Bangladesh (110), Sri Lanka (120). The toppers in this list are – Norway, followed by Denmark and Iceland.

But then, aren’t we in the hope of acche din, coming our way? The father of the nation, Mahatma Gandhi had defined happiness by observing it’s a three-pronged balancing act – it is “when what you think, what you say, and what you do are in harmony”. By that measure, what exactly is the reason for India’s unhappiness? It seems the reasons are many – poor life expectancy, job dissatisfaction, lack of social support, trust in government and business. Why this state-of-affairs, since India’s GDP been improving? I suppose this is proof of the fact that money does not mean happiness!

Happiness had come into the spotlight ever since Bhutan brought it upfront. Maybe we need to take the dictum – “don’t worry, be happy” a bit more seriously!

Then we had Mother’s Day that had brands involved, as they paid tribute to Mothers in many interesting ways. So, Mother’s Day campaigns celebrated the unbreakable spirit of mothers.

Micromax Mobile reminded us that ‘Calling our mother’ is still the most important thing our phones can do. The pickle brand, Mother’s Recipe reached out to spread the word about their initiative, that brought the #TasteOfMother’sLove to underprivileged children. Bajaj Electricals had a video showing how we can always identify Mother’s Love and say #OKMeriMaa. MakeMyTrip.com weaved the spirit of Mother’s Day together with travel experiences. Nissan India celebrated the #SpiritOfMotherhood with their campaign, which highlighted the fact that Motherhood is something that lives in all of us; it’s a feeling that loves, cares for and supports our loved ones. Reliance Jio went all out to thank all mothers for always being a call away, and invited their social media followers to share one thing their moms always say on a call.

The last word, I think came from Big Bazaar, who proclaimed: Today our lives are more connected than ever. But, are we losing touch with the one technology that created us? #MakeTimefor Maa.

No, everything is not lost. The Mother stands for boundless joy. Thankfully, I end on a happy note, and urge you to make time for happiness too!

Strong brand identity can be the secret weapon for young brands

Stronger Together for a safer today and a better tomorrow