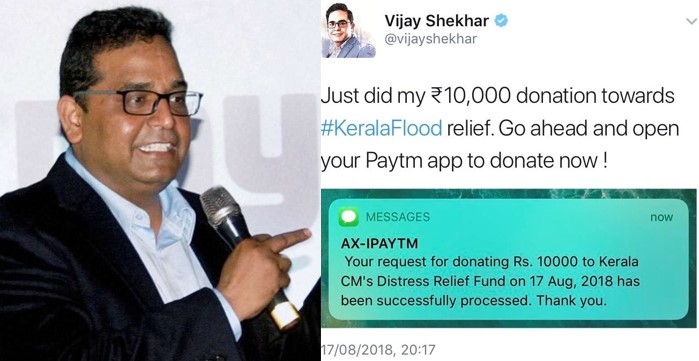 I am not sure where to start. It is complicated. Well, every few years a brand emerges in India that disrupts, innovates and makes it large. A few years ago, it was Indigo. In the recent past it has been Paytm. I am passionate about iconic Indian brands and I think they can choose to behave the way they want to but in the court of public opinion they should behave and communicate in an inspiring way and the behaviour stems from the leaders at these brands as well as its employees. We saw how Indigo has been behaving ever since competition heated up in 2015. We have also seen how Paytm has been behaving in the aftermath of demonetisation. To each their own.

I have only six apps on my phone, one of which is Paytm. I swear by this app and I’m grateful it exists. I have no grudges against Paytm or its parent company and I have nothing personal against its Founder. I have been a fan of Paytm ever since I began using Uber, for which Paytm was the preferred way to pay. I also became a bigger fan of Paytm as I got closely acquainted with the PR team that manages several elements of the reputation management piece. I’m also an admirer of the young woman who runs corporate communications at Paytm. I have had an opportunity to meet Vijay Shekhar Sharma about four times, including once in his office and he is a hero in his own right. And I am grateful that Paytm sponsored two of my platforms with a contribution in 2016 and 2017.

Now to the slightly harsher part. There have been many instances of Paytm being high-handed including in the aftermath of demonetisation where it cleverly used the image of the Prime Minister in its ad and got a lot of flak. Then there was the famous video that went viral of the founder being boisterous at an office party. More recently the cobrapost sting had the same Founder’s brother boast to the person at the other end about their personal connections to the political party in power with communal undertones. Besides this, Paytm is fighting an interesting battle with regard to growth of rival wallets including Whatsapp based on the premise of Indian versus foreign company and where should the servers be located. Paytm’s parent has a considerable amount of investment from a Japanese behemoth and a Chinese giant, so it is partly foreign owned though headquartered in Noida.

But with all this background, Paytm needs to be more mindful, more respectful of important links in the power and reputation structure. Paytm maybe a privately held company but with millions of users and customers it cannot afford to take things in a trivial way. Taking stakeholders along is important for brands to flourish. It is a unicorn with a valuation of over Rs 75,000 crore ($10 billion). I’m writing this more as a short open letter to Vijay, because someone needs to give him unsolicited advice and I am ready to do that. I may never get a Paytm sponsorship ever again. I will definitely not ask for one but will not refuse if one is offered. More importantly I don’t think his team will be able to tell him what I do here because I have nothing to lose and I call a spade a spade.

The rules change when it involves a national disaster and some amount of care will help.

Both, the above actions – to give and to publicise what you give are not the problem. Here is what the problem is. You have, in my opinion, the smartest in-house communications leader in Sonia and a superb external PR team in Value 360. Creating and sustaining public opinion is an art and a science and needs some amount of thinking, ask them for help. Please do not treat public relations professionals as mere hands and legs. Not asking them for guidance devalues their existence and it shows. Public Relations is about behaviour more than it is about communications. You have earned the goodwill of millions of Indians. Why would you want to squander it through unnecessary missteps? Had you stood by your tweet and not deleted it (whatever be the provocation) things would have been perceived differently?

Donating a certain amount was not the big deal but trying to make Paytm look bigger than the cause was the issue. And it came across that way. Let me as a customer and ordinary observer of brand behaviour explain how –

I will still give you the benefit of doubt because from my interactions with you, you come across like a guy with a clean heart and a good intent. But because a major part of Sunday on Twitter saw a volley of fans and non-fans batting for both sides I felt I would burn the midnight oil, sleep one hour less and type this out.

My four bits of parting advice to you as a life-long student of reputation management is when you have professionals to manage communication, let them do it or guide you during special situations like these. Always remember that people who question you are not your enemies but your well-wishers. And flamboyance is acceptable during normal times but is shunned during times of difficulty.

PS – I run a tiny annual conference in a not-for-profit model. I had a choice to ask all attendees or all sponsor companies who are my customers to contribute generously on behalf of the PR profession but the right thing to do was to appeal to human nature where ten people who committed to pay 10% more than the regular fee for the conference would get the conference for free and the entire amount they pay would go to the CM Disaster Relief Fund.

You have the right to ignore this letter or respond to it but I will defend unto death your right to donate whatever amount you wish to do for any cause you want to but definitely not at the cost of promoting a commercial brand during the time of distress.

An appeal … for saving our reputation