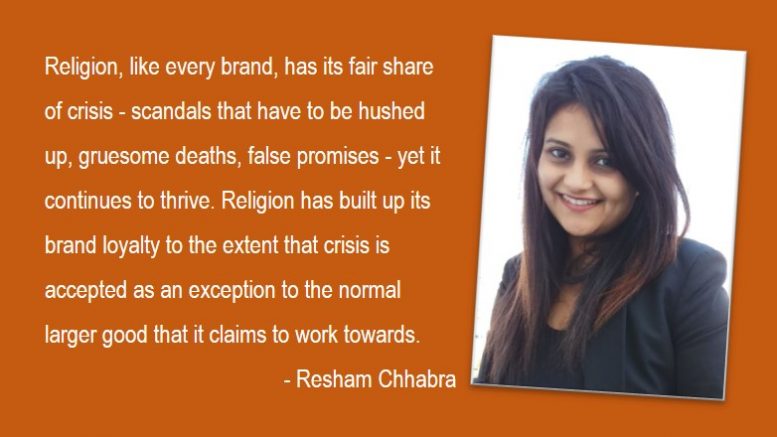 Religion and marketing are both forms of meaning making. Both seek to create a need where none exists. To convince buyers that a void exists in their life – one that can only be filled by making a very specific purchase. Step back, for a moment, from the fervour and emotion attached to religion and view it as a business model. One that sells the idea of God. Now consider every piece of religious literature, every picture, every song, every sermon as a product of public relations. Public relation efforts directed at you with a singular purpose: to make you believe in god. To make you do what God wants you to. Essentially what every PR professional working for a corporate is looking to do. To make you believe in their cause, to make you do what their corporate wants you to.

While the existence of God and the authenticity of religion can and has been debated one fact has remained constant. Religion has continued to exist over centuries and religious affiliations have become incredibly powerful to the extent that it often indirectly wields political power. And yet brands which have for decades, some even for centuries, strived, through academics, carefully structured models and the most educated of individuals, to create loyalty have often failed to secure little more than a temporary affection.

When the first product became irrelevant, religion evolved to include smaller scales of products, individualised products, brands often don’t evolve beyond their primary offering. Religion has stayed constant over centuries of significant change. The industrial revolution            which changed the way products are manufactured and marketed has had its effects on religion as well. Post the industrial revolution, mass production of religious literature and artefacts increased as did their sales. Similarly in the age of mass media, religion has evolved to have the pope on twitter and gurus are launching communication platforms. Each massive global trend has been reflected in how religion has changed over the years. Yet, brands fail to do this. Kodak was unable to move past, photo films, writing off the digital age as fad. Interestingly, in a much shorter time frame 88% of the Fortune 500 firms that existed in 1955 are nowhere to be found. Religion is perhaps the greatest testament to the need for evolution having survived global wars, economic setbacks and a whole array of crisis.

Religion demands to be heard in politics. Brands shy away. For the longest time religion has held a visibly influential role in politics. It isn’t uncommon to for politically leaders to brazenly declare their alliance to a specific religion. In India not having a religious alliance seems almost detrimental to governance. Brands support politics too. The country’s most renowned industrialists are all involved in decision making at a national level. Public affairs, as we term it, is an active operational area of most brands. The key difference between religion and brand comes then in the extent of publicity of their political involvement.

Brands often resort to the term lobbying, attempting to influence policy from the sidelines. We settle for an indirect influence in public policy while religion boldly proclaims its vested interests. Interestingly while we shy away from voicing our opinion in favour of public policy, we are quick to join in public mudslinging. For instance, not one brand will come up front and say Section 377 needs to be done away with, but most brands will join the voices on the street when a judgement to the contrary is passed. Brands are terrified of angering the authorities.

Religion has historically been more successful in creating a sense of community than brands will ever be. One of the things that religion got right from it’s very beginning is the need to create communities of followers. Churches, temples, mosques, in fact every religious institute is an invite to join a community. Before the days on incessant mass media, these institutes were one of the few opportunities for communities to gather and interact. Slowly brands have picked up the trend and you have biker gatherings and cookouts and all sorts of events designed to give brand followers a sense of community. For instance, the Royal Enfield community forum for biking enthusiasts or even the community created by Harley Davidson has promoted a sense of belonging tied very closely to the possession of the product being sold. The biker communities meet on a weekly basis and the sense of community no longer needs to created by the brand. Irrespective of Royal Enfield or Harley Davidson’s involvement bikers will gather together, plan trips and generally experience a strong sense of communion. In fact, Harley Davidson frequently leverages these communities to drive public relations for the brand.

Brands cash in on religion, the biggest example being Id-ul-Fitur, Diwali, Christmas sales, but vice versa rarely happens overtly. The magnanimity of religion is never in question. Not when movies are created, or books are sold or any other form of merchandise hits the market. When religion associates itself with a cause, it’s never riding the wave. Brands on the other hand are continually called out for forcing themselves on issues. When a brand comes out in support of a cause, be it discrimination or animal rights they are often accused of creating a spectacle of the issue, with the act labeled a publicity stunt. While religion has legitimised its cross-spectrum presence, brands have often been unable to effectively look beyond its local environment to find a sense of purpose on a large scale.

Religion offers no promise of instant gratification in a personalised economy. In a time when brands are scampering over themselves to meet consumer demands as and when they arise, religion makes no such promises. You have a need and religion has the product for it but at no point does religion promise instant availability or for that matter a foolproof product. Interestingly, a prayer going unanswered or a miracle failing to occur multiple times disgruntles next to no one. But a brand delivering a faulty product or even changing a logo can draw flack on a global scale. ​How has religion created low expectations for itself? Deferred benefits?

For religion Brand loyalty trumps Crisis Management. Religion, like every brand, has had its fair share of crisis. Scandals that have to be hushed up, gruesome deaths, false promises have all featured in the trajectory of religious history and yet despite scandals on the scale of Jim Jones, or even Ram Rahim back home, religion continues to thrive. Loyalist conceded to “one-off events” and yet forgive at a level rarely experienced by brands. Religion has built up its brand loyalty to the extent that crisis is accepted as an exception to the normal larger good that religion claims to work towards.

While religion has unequivocally stood the test of time, the last couple of decades have seen an increasing number of brands fight against the odds. Homegrown brands like Britannia, Bennet and Coleman, Dabur, Godrej, Indian Hotels Company, ITC, Kirloskar, Tata Steel and TVS have been around for over a century, lasting through many of the tumultuous changes Indian markets have seen. While a myriad of strategies can be credited for their sustenance a lot of these brands have created for themselves an untouchable magnanimity. They have weathered their fair share of crisis and have been able to grow despite the turbulence. They have at various instances, changed their offerings, created individualised products and have adapted to changing customer needs. ITC has gone from selling to tobacco to selling confectionery, incense sticks and stationery, a change which had perhaps helped it survive. Parallels between the trajectory of these brands and the trajectory of religion can often be traced at fundamental thought levels. While the scale and historical context of religion has made it something of a herculean feat for brands to follow, perhaps we should consider what little can be emulated and set our hearts on a higher purpose. 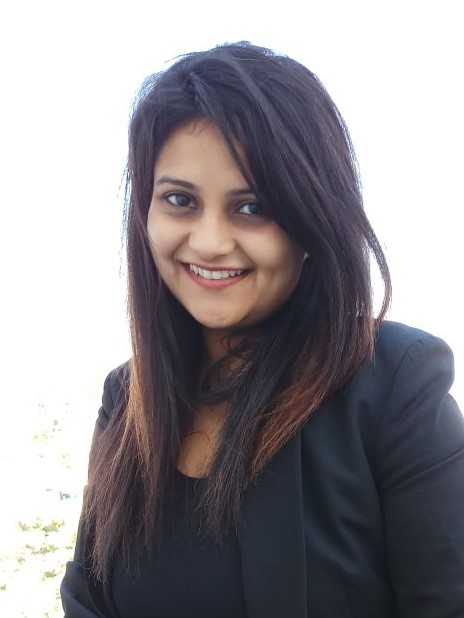 She has worked with Accenture on several partnerships with NGOs like Rockefeller Foundation and Bill and Melinda Gates Foundation. Resham was also involved with GPower which works to re-admit school girls into formal education, address cases of missing children and prevent child marriages and also presented a case study on it in the UN.
SHARE TWEET PIN SHARE

Be the first to comment on "Why Jesus will always have more followers than your brand?"