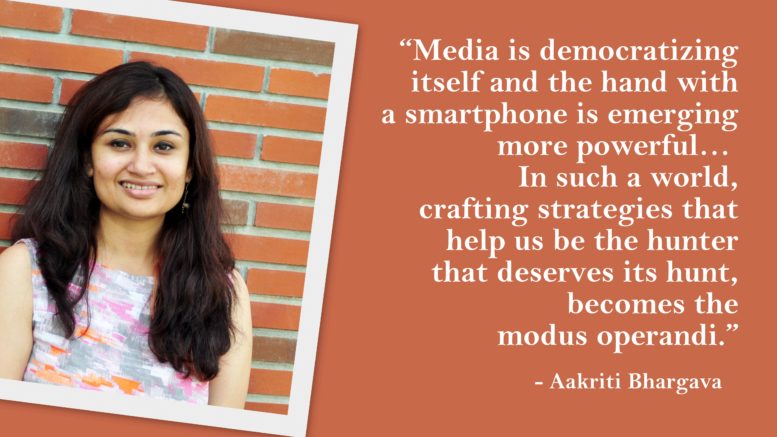 “If you don’t like the way the table is set, then turn the table over” – said Frank Underwood. This is by far one of the strongest and most poignant quotes from Frank Underwood that resonates with the PR world.

I am a huge fan of Netflix’s House of Cards (well who isn’t!). For Frank Underwood – the protagonist, the politician, the underdog, and so many other roles weaved into one – rules, plays, defines, defies and yet, emerges from strength to strength.

There is a streak of darkness within him that we hate, yet the character never fails to inspire. So much so, that I end up drawing parallels between what we go through in our professional lives and him. Intricate PR lessons, or rather industry lessons are weaved into the plot led by Frank Underwood that could be a take away for me and many PR enthusiasts around the world.

“Pay attention to the fine print, it’s far more important than the selling price” – said Frank Underwood. In so many ways this is so relevant to us. We exist in a world where access to content is free. In such a world, we need to realise that useless stacking of meaningless numbers called AVEs is redundant. The value of the message that an article carries is more than what it’s value would be in centimeters and inches. We are slowly moving to a PR world where some form of measurement helps us make headway into every quarter and year with meaningful strategies derived out of outcomes of previous work.

“There are two types of Vice Presidents, doormats and matadors” – said Frank Underwood. Which one are you? Do you continue to play by the game where you are just the referee? You have as much power as you bestow on yourself. Try and see the real impact that PR has on the topline and see if you can pave the way to contribute more to the business. In the PR industry, you can either be a doormat and continue being absolutely transactional like a mere coordinator, or you can choose to be completely strategic and add value to the eco-system in a holistic way. Be the matador. Always.

“Of all the things I hold in high regard, rules are not one of them” – said Frank Underwood.

Are you constantly rewriting the rules of PR game? It’s time we questioned the need of a press release in the era of 140 characters. In fact, in our profession, we fall into the abyss of considering some tools as rules. The good-old PR Bible is worn out. This new era demands that we make our own rules every day. Whatever works best for you and your brand is the new rule for you. Functionality is the fundamental mantra, old trends are nothing but archaic. Hence, rules are nothing less than etiquettes.

There is but one rule, hunt or be hunted” – said Frank Underwood. In a world that is running topsy-turvy, thanks to technology, there is no truth bigger than this one. There is no hiding anymore, and the fourth estate is losing its sheen. An even bigger force is arriving on the scene, and as you read this column, think how media is democratizing itself and the hand with a smartphone is emerging more powerful as each day passes. In such a world, being out there, crafting strategies that help us be the hunter that deserves its hunt, becomes the modus operandi. What’s happening in the current world is, every time the media wants to craft a story, they hunt us down. What we need to do is reverse this phenomenon and start hunting the people who would write the things you want to be written about your brand.

Is traditional PR fading in the digital era?

Seven ways to deal with Stress in PR

Creativity at the helm of Public Relations

Be the first to comment on "PR – the Frank Underwood Way?"