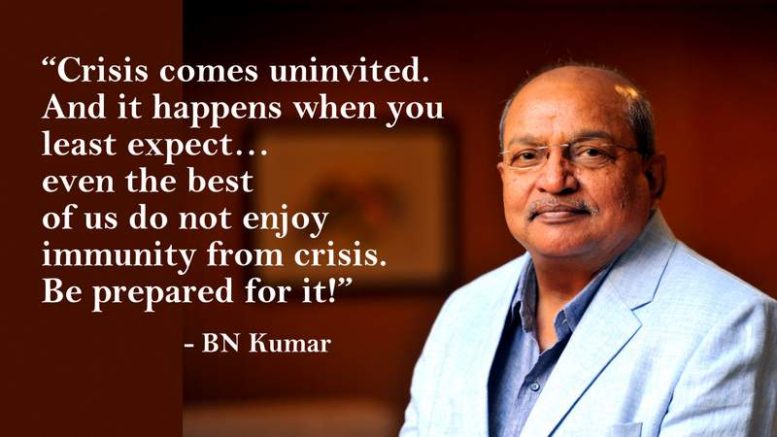 Crisis communication is about getting facts right, setting the record straight.

Crisis comes uninvited! And it happens when you least expect!

In fact, even the best of us do not enjoy any immunity from crisis. But the severity of crisis could vary depending on whether you are an individual or a corporate.

It could be a traffic constable holding you up when you are in a hurry to go for an appointment or for that matter what happened to Vijay Mallya or Maggi.

During my media training sessions (aimed at making corporate honchos media ready!), I am often asked this question: So, how do we handle crisis?

My answer is simple: Be prepared for it!

Three decades on, Union Carbide’s Bhopal disaster continues to stay top-of-the-mind when one talks of corporate crisis. The company avoided the media when MIC leaked from its shut-down plant and killed hundreds. As a reporter at UNI – the then premier news agency – in 1984, I was struggling to get official information.

A knee-jerk reaction to crisis that I have been witnessing among corporates is: “Get that damn story killed.”

I keep telling my clients during discussions that requesting a journalist to kill his story is like asking him not to do his job! No journalist worth his salt would like to be told to kill his story. Instead, you should look at the facts and give your side to keep the story balanced. It is only when the journalist gets his information absolutely wrong that one can suggest that he should not do the story and even caution him about the legal consequences.

Some corporates and PR practitioners may brag that they can get negative stories killed. But such ‘successes’ cannot be repeated.

Even if you are successful in blocking a story in one particular publication, there is no guarantee that it won’t appear in another publication. The ‘source’ of that information can always approach another media house. For instance, a client of mine pressurized the space marketing department of a publication into killing a news item. His celebration was short-lived as the same story with a big headline appeared in another newspaper, two days later.

Please check this case study as well. A PSU complained to a small newspaper management about a reporter who was writing so-called negative stories about the government company. The reporter was asked to quit. The PSU might have thought that its problem is over. But the sacked reporter joined a larger publication, which thrives only on negative and sensational reporting. Guess what happens now? The reporter writes against the PSU with vengeance! The government company’s crisis multiplied instead of dying down!

Many manufacturing units, which handle hazardous material or are prone to accidents, do conduct periodic safety drills. It is essential that even their corporate communication departments and their PR consultants (who handle hazardous stories!) oil their machinery well to handle crisis.

Here are the Ten Commandments for crisis communication; some of these may sound simple. Yet please keep them in mind (or as an air hostess says: Some you may be frequent fliers and are familiar with the safety instructions. Yet we request you to pay attention to the demonstration).

Be the first to comment on "You can’t kill a story!"

This is no time for monkey business!