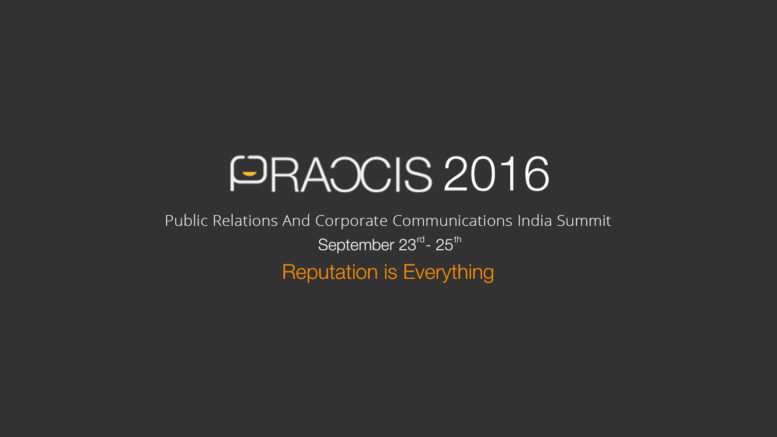 What is bothersome is how some people do not understand the essence of this annual summit and are hankering to be speakers. Never till this date has any of those men and women who hanker for a speaking slot bothered to find out how the event raises its money or to just go online and sign up for the event. However, this is not an article of angst.

The reason I’m writing this is to share the thought behind how PRAXIS was born so it becomes a reminder and a piece of information for the uninitiated. Global and Indian advertising festivals were taking pity on their so called poor cousin and including some element of Public Relations into the mix. These festivals and the people behind these festivals had built themselves entirely on the foundation of good Public Relations. I was getting exposed to some cool events for PR professionals in Chicago in early 2012. I had also been to Goafest in 2010 and 2011.

I was surprised that no Indian PR association – there were half a dozen back in 2012, had bothered to come forward and organise an annual gathering based on certain principles. Someone had to bell the cat. I took it upon myself to do the needful. I cannot forget the initial support from Aseem Sood to offer to help monetarily when most others were sceptics.

The idea was to connect professionals under one roof with meaningful content to make the trip worthwhile. And we created a few unwritten rules (which are now being written here). To not have more than one person from an organisation as a speaker at one particular summit; to never repeat a speaker; to never repeat the venue and the entertainment and; to never repeat the co-chairs. We have tried doing this with success for five years.

This year while the generic theme is Reputation Is Everything, the underlining thrust is on five. So we have tried to invite five global leaders. We will have five people on each panel. To those of you who have never been to a PRAXIS before, try and sign up for this edition. For those who have been to one or more or all editions in the past we hope to see you a month from now.

PRAXIS in latin means ‘to do’ or ‘to act’. The name is an acronym for the Public Relations and Corporate Communications India Summit. So act now to be part of a great gathering of the finest professionals. Check out www.praxis2016.in

How to be more professional in one of the most exciting professions?

Influence – Why does it make a difference?