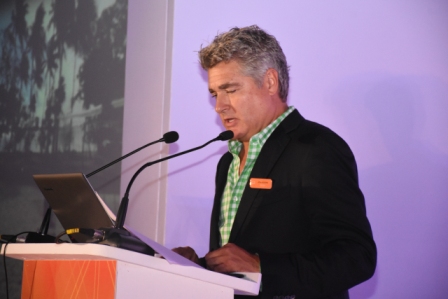 Today, some of the impossible, unimaginable things are surfacing in the form of Augmented Reality and Virtual Reality. But what are they exactly? This was the crux of the keynote address given by Jon Higgins, International President, Ketchum. Yes. He was controlling the AR and VR narrative, literally at the event.

Let’s begin by diving into the world of VR (Virtual Reality)  and AR (Augmented Reality)  said Jon Higgins, as he  started his talk on “The Role of Reputation Management  in the Age of Artificial Intelligence and Virtual Reality”. Then his discussion moved onto other topics like – the rise of Artificial Intelligence (AI) in Marketing Communication, improving effectiveness,  a word on cannibalism (where some of the jobs are likely to be eliminated), and how do you market an algorithm.

“Virtual reality is a realistic and immersive simulation of a three-dimensional environment,” he said, which uses images, sounds and other sensations that replicate or create an imaginary setup, where an example could be Playstation.

Augmented Reality offers a live view of a real world environment and our view, usually on phone, is augmented or supplemented by computer infographics. Here he quoted examples of work they had produced – like Samsung’s “A fighting Chance”, a film created, which was premiered in Film festivals and shown in theaters too. This has “extensive use of 360 degree slow motion in virtual reality history” according to Jon.

Another aspect of AR is that it takes us places where we wouldn’t, couldn’t, or shouldn’t go, he said as he spoke about using VR for a client, when they took journalists into a hospital, to actually show them where the infection existed!

“We’re proud of our work done for the United Nation High Commission for Refugees (UNHCR), which addresses the refugee crisis going on right now,” he explained. The crisis, as we know borders around Lebanon, Turkey, Jordon and so on. That was a challenge, and then entered VR! The submersive VR experience used, takes you around the camps so that one can see the living conditions that a 12 year-old Syrian faced, while living in Jordon with 84,000 other refugees. Now, wouldn’t you say that’s a smart use of VR, he questioned.

Then, he took up the issue of Augmented Reality, which he expressed firmly has “huge potential in our field”. Like Pokemon GO, which is a global phenomenon, and is already being used as a shopping experience, as you walk down the super market.

Touching on the marketing potential of face recognition technology, he moved on to the rise of AI in Marketing Communication. He mentioned they are using  ‘Story Works’, so they can do content creation 24 X 7 all over the world – moving from an ‘idea’ to going ‘live’ in the real world. Highlighting the power of AI, he pointed out that AI has been improving our effectiveness, with the use of AI in many platforms. The role of communication professionals will be – throughout the day checking cameras, helping target accurately, measure results – all with the purpose of ensuring that messages are most effective.

On the topic of cannibalism, he pondered on what jobs will get cannibalised and even gave a list! And, it is a fact that Associated Press is using AI robots and a Chinese TV network is using robots for the purpose of content creation!

So, is AI a threat to some aspects of our work, he speculated. No, it is a “tremendous accelerator and also a threat,” he felt.

Finally, he highlighted how do you market to an algorithm? Algorithms are for everyone; it determines what is valuable, what you see everyday; they are on Facebook, Flipkart, Amazon. At this point, he referred to the Google Algorithm. Google changes algorithms 500 to 600 times a day, which is roughly twice a day. How do you make sure your content is on Page1? And, currently, they are already developing expertise around algorithms, he concluded.

The golden era for Reputation Management!

What are your new essentials?

Responding in a World of Reactions