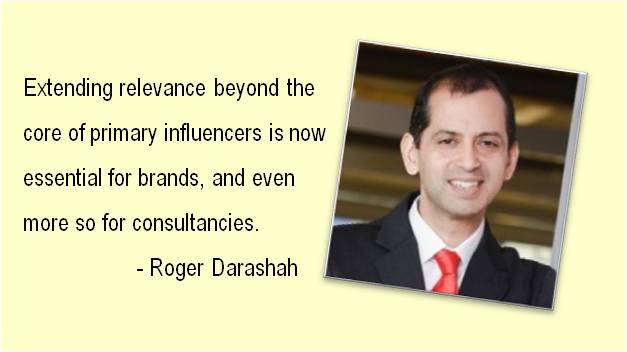 In the 1990s, at the beginning of my PR career, brands dedicated themselves to communicating with and engaging a core set of, usually, knowledgeable and well-informed influencers. In those days, no respected account executive would be far from a copy of BRAD, the industry’s eponymous media directory listing titles as diverse as Open Wound Monthly, to Uninterruptable Power Journal (yes, they both existed as subscription print magazines). BRAD was a ‘5kg media bible’, which reflected a world where – no matter how esoteric your product or service – there was certain to be a print publication somewhere dedicated to it.

But the world has changed; the last copy of BRAD was published in March 2009, and plenty has changed since then. Specialist print titles – even subscription-based ones – became economically inviable. Such titles consolidated, moved online, and/or simply disappeared.

In India, traditional media consolidation is also happening at pace. English print media circulation, for instance, declined by 40% in 2015-16; the combined reach of print media down to 30mn from 50mn across the country. Some industry sources predict the disappearance of the newspaper altogether (English language or otherwise) within 20 years.

Digitisation has also changed the mechanism through which content is validated and shared. According to Reuter’s annual Digital News Report, half (51%) respondents say they use social media as a source of news each week. Around one in 10 (12%) describe it as their main source. Facebook is by far the most important network for finding, reading/watching, and sharing news. According to the World Economic Forum, in India, trust in traditional media has reached an all-time low. The phenomenon of Fake News, accusation of biased reporting, and reduced resources have compromised journalistic credibility.

The 1990s were characterised by ‘Small Circle’ PR; campaigns targeting authoritative, informed, primary influencers through specialist media dedicated to a particular sector or discipline. The above trends are conspiring to render this approach irrelevant. Brands – and PR firms – limiting themselves to such engagement are missing out on the wider opportunity to generate influence that supports their business, reduces their cost of sales or recruitment, minimises costs and incidence of litigation, and ensures a more desirable trading environment.

‘Big Circle’ PR is about achieving these aims. Big Circle PR reflects the wider audience of secondary and tertiary influencers; from end users and employees, to investors and business partners. The decline of specialist titles, the consolidation of traditional media, the growth of the Internet, and the emergence of so-called peer-to-peer news has made the engagement of these audiences directly non-negotiable for brands. Big Circle audiences are defined and united by one characteristic; they are not yet interested in your product or service, they are not currently discussing the same, your brand is not a subject of conversation for them. So it is essential to listen to their conversations and find a point of contact before engaging. Be assured that, that point of contact is unlikely to be your product or service! It is invariably about them, their lives, their hopes, their aspirations, their reality…. This is the central challenge – and opportunity – behind Big Circle PR, to be a part of other people’s conversations, every day.

Brand managers brought up on a diet of paid media and press releases may require convincing, but basing your campaign exclusively on a Small Circle approach is becoming increasingly difficult to justify. There are fewer opportunities; most of the specialist media are already deeply informed on their sector and their disposition is less likely to be influenced by brand communications; the possibility that certain specialist reporters don’t particularly care for your product also represents a reality and a risk.

Big Circle PR offers opportunities to engage multiple influencers – even, within the same publication. At the very least, it represents a risk mitigation strategy.

The reality is that Big Circle PR also offers so much more, for brands and the PR firms that serve them.

What goes into Fulcrum