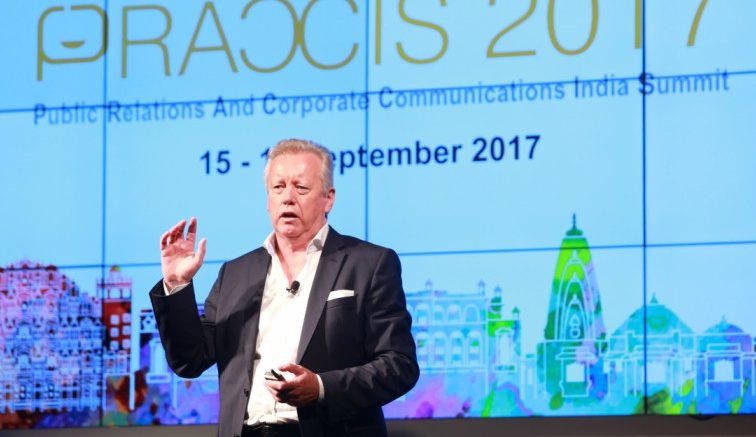 It’s good to be back in “Incredible India”, said John Saunders, Global CEO, FleishmanHillard as he spoke on Staying True to the Calling of Communications.

Saunders stressed the need for Public Relations companies to be honest and truthful. Recalling the time when he first started his career with his own PR firm at age 23, he said “I felt I could do better,” and then went on to narrate the story of his involvement in the Van Morrison episode. He shared the story of how he had got legally involved. It was in his client, singer Van Morrison’s infamous ‘love-child’ case of 2009, where he had to move the courts to clear his own name and integrity.

The story had broken in media all over the world. The headline that blazed was – “Singer Van Morrison becomes father again at 64”, but Morrison had denied this totally, which Saunders communicated to media. He spoke about how a major tabloid in UK told him that he had said things which were not OK! So, being his PR guy, he featured strongly in the story, as “some Irish idiot”! His role in the story was not exonerated and he was forced to go to court. His point of view was – “I felt this was important for our profession. If I did not address this, my reputation would be in question!” Then he did get vindicated and then the headline in Irish Daily Mail read: “Van lied to PR man about paternity. Now he pays damages”. Finally, he even apologised to him.

All this brought the question of reputation upfront. While building a reputation, we must insist on the highest ethical standards, in every aspect of what we do for a variety of audiences – was his clear point of view. For clients, there must be honesty and integrity in all aspects. For employees – there must be respect; for our parent company and its shareholders there must be excellent management; for the communities in which we live and work, we must act responsibly to foster public dialogue and debate.

Highlighting ethics as a culture, he said, “We strongly believe having a strong foundation of ethical standards is vital for the business”. Then he focused on “8 for ’18” – eight forces that create a new calling for communications, which consisted of:

It’s important that we have to have a working knowledge of how people communicate. Consumers must be able to join conversations and make value-based decisions. There must be authentic engagement, because “at the end of the day all you have is your reputation!”

In the Q/A session with Ipshita Sen of Adfactors PR, Saunders said, “PR companies need to know when to draw the line. It is imperative that we say, ‘we cannot do this!’ when we feel that our ethics and integrity are being compromised.” He strongly advised – “Don’t be loaded into an undesirable situation by anyone! Their past catches up with them. We’ve seen it in politics and business too.”

On amplifying brand messages and the importance of playing back feedback in the market, his point of view was – “It’s important to give feedback in a positive and constructive way. There are risks involved but you have to earn the respect.

Whether tech is going to take over the role of communication, he said he was concerned about the future and that managing reputation of organisations will become increasingly important. “But I think we are doing great work, but the challenge is to see that the best talent comes to PR!”

Being a fast and fearless communicator

The changing face of news – From live telecast to live stream