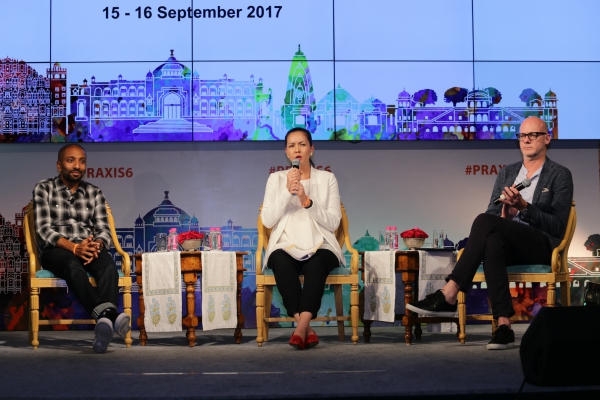 Power Panel 5 on Day 2 of #PRAXIS6 focussed on Will Asia lead the way in the next wave of creative communications? In the discussion the participants were: Margaret Key – Burson-Marsteller and Darren Burns – Weber Shandwick, and it was moderated by Arun Sudhaman – The Holmes Report.

Learning about the focus and direction in which the communication sector is moving is important for PR professionals and the relevance of how to engage with key stakeholder groups across different regions. And, here the focus was on Asia.

Talking about creativity in an Asian context, Arun said, it can be seen that creativity is not “this global edict handed down from an ivory tower”. This is where the context comes up, for without understanding the context, creativity becomes worthless. How do you show that creativity is useful because of the context? Quoting two campaigns – Nike and Kindle, Darren who is China president and chair of innovation and creativity at Weber Shandwick, said that whether in China or India, it’s very important that you need to understand the local context. In the Nike ad, they used local talent and made it visually appealing, so that the relevance in the local market is highlighted. Global brands such as Nike focus on universal elements that transcend cultures, geographies and even generations. For a brand to be global, the story needs to go beyond these restrictions. In PR you transform the brand in the local context, he pointed out.

How do you get to the point when you can get the right local content? Darren was clear on this. Trust the local team, and understand their culture. In Shanghai, they create products where nothing exists. And one of the habits of the people there was –  they spend thirty minutes a day on e-commerce in every city in China. Talking of creating new things, in cricket, the concept of IPL – is a value creator and a great example of Indian innovation, he said.

Zeroing in on local insights is going to pay in the long run. How do you work at getting local insights? According to Margaret, you come up with the brief, get the insights, then go on to ideate. Then the campaign will have to resonate. She noted, “India as a country, operates differently from China or Korea”. But, how do you take the campaign and make it actually relevant in Asia? “You have to be willing to step up, you have to be bold,” was her advice.

When Arun brought up the topic – “Let’s talk of the people required to deliver this kind of work. Is it as simple as bringing creatives for advertising? Unless you push yourself, it may not happen”. Margaret said consumers resonate with new stuff, and if you are not doing that, it is of no use. Reality is when the client is at the table and, then it’s storytelling – that’s what we do. “If it’s any time to embrace creativity, it is now!” she said.

And, what happens if there is this big idea, but it was risky for the client? The feeling was it’s the job of the client leader to understand the client’s risk. Under closed doors, you need to propose new ideas, even though clients may not use them. There is so much of information to drive positive change. The need was to take pride in the work one does and to push the envelope, but that doesn’t happen all the time!

Being a fast and fearless communicator

Be the first to comment on "Whether in China or India, it’s very important to understand the local context"